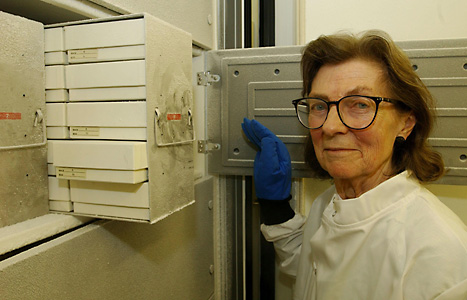 McLaren, Dame Anne Laura Dorinthea (1927–2007), geneticist, was born on 26 April 1927 at 38 South Street, Mayfair, London, the younger daughter and fourth of five children of Henry Duncan McLaren, second Baron Aberconway (1879–1953), politician and industrialist, and his wife, Christabel Mary Melville, née Macnaghten (1890–1974). Her father was Liberal MP for West Staffordshire from 1906 to 1910, and for Bosworth from 1910 to 1922; he was also a wealthy industrialist with interests in the coal, iron and steel, and engineering industries, and a distinguished horticulturist (creator of the gardens at Bodnant, Denbighshire, which he handed over to the National Trust with an endowment in 1949).

McLaren (who gave an early indication of her quiet self-confidence when appearing alongside Raymond Massey and Ralph Richardson in the film Things to Come in 1936) was educated at Longstowe Hall, Cambridgeshire, and Lady Margaret Hall, Oxford. She had intended to read English, but later claimed that she decided instead to read zoology when she found the entrance papers for English too hard. She was taught by Alister Hardy and Willy Holmes and the geneticist E. B. Ford, and graduated with a first-class degree in zoology in 1949, also winning the Christopher Welch scholarship the same year (the first woman to do so). After working on mite infestation in drosophila (fruit flies) under J. B. S. Haldane at University College, London, and studying the inheritance of acquired characteristics in rabbits under Peter Medawar, she embarked on research on neurotropic viruses in mice (a topic of relevance to poliomyelitis) under the supervision of Kingsley Sanders for her DPhil, awarded in 1953. One of her fellow students was Donald Michie (1923–2007), son of James Kilgour Michie, East India merchant. In 1952 she and Michie both obtained research posts at University College, and on 6 October, at St Columba's Church House, Chelsea, married. They had two daughters, Susan (b. 1955) and Caroline (b. 1959), and a son, Jonathan (b. 1957). The marriage ended in divorce in 1959, but she and Donald Michie remained close friends. They also continued to share political beliefs: they had both joined the Communist Party of Great Britain at the height of the cold war, and although Michie resigned in 1956 (McLaren remained a member until the party's dissolution in 1991) they collaborated on a variety of left-wing causes, and frequently took part in marches, demonstrations, and fund-raising events together.

McLaren did not let marriage, the arrival of three children, or her political involvements deflect her from her scientific career. She continued to work at University College until 1955, when she moved to the Royal Veterinary College, London. There she worked on aspects of the reproductive biology of mice. In 1958, with John Biggers of University College, she produced the first litter of mice grown from eggs that had developed as embryos in tissue culture and then been transferred to a surrogate mother. This work was crucial in the later development of in vitro fertilization and embryo transfer in humans (which led to the birth of the first ‘test tube baby’ in 1978).

In 1959, following her divorce, McLaren moved to Edinburgh, where she joined the staff of the Agricultural Research Council's unit of animal genetics at Edinburgh University. She remained there for fifteen years, continuing her work on reproductive biology and embryo transfer (including refining techniques for the latter), but expanding also into research on mammalian fertility, immunocontraception (with Alan Beatty), DNA hybridization (with Peter Walker), and chimeras, organisms consisting of genetically different kinds of tissue produced by the fusion of different embryonic cells (with Hans Grüneberg). She also acted as both supervisor and mentor to a large and subsequently very successful group of graduate students. Unusually at that time she did not insist on adding her name to their publications, despite her sometimes important contributions. (She nevertheless published more than 300 scientific papers in her lifetime.)

In 1974 McLaren moved back to London, where she became director of the Medical Research Council's mammalian development unit at University College. In this post, specifically created for her, she continued her research on all aspects of reproduction, but focused increasingly on the development and differentiation of germ cells—the cells from which eggs and sperm derive. She was particularly interested in how these developed into stem cells, crucial to understanding how cells may generate other cells (with important implications for future health treatments, for instance the replacement of human cells damaged by injury or by degenerative diseases). It was while she was in London that she published her two books, both quickly regarded as classics, Mammalian Chimæras (1978) and Germ Cells and Soma (1980).

In 1992, while continuing to live in London, McLaren was appointed a principal research associate at the Wellcome–Cancer Research Campaign Institute (later the Wellcome Trust–Cancer Research Institute, and later still the Gurdon Institute) in Cambridge, where she also became a fellow of King's College. Her research in Cambridge added still further to knowledge about germ cells, the roles of sex chromosomes, and other aspects of the very early stages of reproduction.

A sceptic in religious matters, McLaren was nevertheless acutely aware of the ethical issues surrounding her area of research, and was willing to provide leadership in discussing and resolving them. She was a member of the Warnock committee on human fertilization and embryology, which led to the Human Fertilization and Embryology Act of 1990 and the establishment of the Human Fertilization and Embryology Authority to regulate in vitro fertilization and the use of human embryos. She was a member of the authority from 1990 to 2001. She was also a member of the Nuffield Foundation's bioethics council, and of the European Group on Ethics in Science and New Technologies, an advisory group to the European Commission. She appeared frequently on radio and television to put the scientific case for carefully regulated research on early mammalian and human embryos. (She was an extremely fluent and clear speaker as well as writer.) She was also a long-term and active council member of the Pugwash conferences, which sought to ensure that scientific advances were put to peaceful uses, and which won the Nobel peace prize in 1995.

McLaren was made a fellow of the Royal Society in 1975, and became closely involved in its affairs, as a member of its council from 1985 to 1987, its foreign secretary from 1991 to 1996, and a vice-president from 1992 to 1996. She was the first woman to hold office in the society. During her vice-presidency she travelled widely on its behalf, and in particular sought to promote the attractions of a scientific career for women, and to ensure equal opportunities for them. Bearing in mind her own experience as a young mother she often spoke in favour of improved government help for childcare (not only for scientists). She took on responsibilities in many other professional and scientific bodies: she was a member of the committee of managers of the Royal Institution from 1976 to 1981 (and Fullerian professor of physiology there from 1990 to 1995), president of the British Association for the Advancement of Science in 1993–4 and of the Association for Women in Science and Engineering from 1995, chairman of the governing body of the Lister Institute of Preventive Medicine from 1994 to 2002, and a trustee of the Natural History Museum from 1994 to 2003. She received many honours. She was a founding member of the Academia Europaea in 1988 and a founding fellow of the Academy of Medical Sciences in 1998, an honorary fellow of University College, London, and of King's and Lucy Cavendish colleges, Cambridge, and she received the scientific medal of the Zoological Society of London (1967), the Marshall medal of the Society for the Study of Fertility (1985), the royal medal of the Royal Society (1990, the society's highest award), the Japan prize of the Science and Technology Foundation of Japan (2002), and the March of Dimes prize in developmental biology (2007). She was appointed DBE in 1993.

Despite her achievements and eminence McLaren remained an essentially modest person; she insisted on being called Dr McLaren even after being made a professor and then dame. Her colleagues and students much appreciated her kindness, courtesy, and interest in others, as well as her razor-sharp intellect. She loved parties, children, and football. One of her colleagues later said that 'when any international match was on television it was a waste of time trying to talk to her' (The Guardian, 10 July 2007). She died in a car crash on the M11 motorway in the parish of North Weald Bassett, Essex, on 7 July 2007, while travelling back from Cambridge to London; Donald Michie, who was travelling with her in the car (and with whom she had recently begun to cohabit again), was also killed. They were survived by their three children, and their lives were jointly celebrated at a memorial meeting at the Zoological Society of London on 19 July. She was also commemorated by separate annual memorial lectures held under the auspices of the International Society for Stem Cell Research, the UK National Stem Cell Network, and Lady Margaret Hall, Oxford, by Anne McLaren fellowships at the University of Nottingham, and by various activities in the fields of science education and genetic research sponsored by the Anne McLaren Fund.