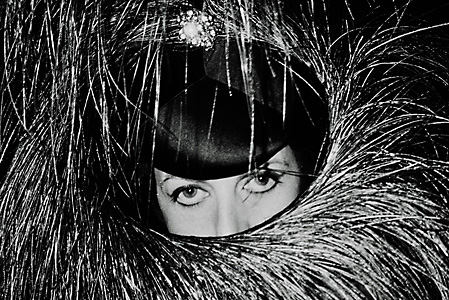 Blow, Isabella [née Isabella Delves Broughton] (1958–2007), fashion journalist and stylist, was born on 19 November 1958 at the London Clinic, 20 Devonshire Place, Westminster, the eldest child in the family of three daughters and a son of Major Sir Evelyn Delves Broughton, twelfth baronet (1915–1993), soldier and landowner, and his second wife, Helen Mary, née Shore, barrister. The Broughton baronetcy was created in 1661 but the family traced its descent from the Vernon family, who arrived in England at the time of the Norman conquest. Isabella's romantic engagement with her family history stimulated an interest in history and architecture. Her grandmother Vera Edyth, Lady Broughton, the first wife of Sir Henry John Delves (Jock) Broughton, eleventh baronet [see under Hay, Josslyn Victor], was an important influence in her life. She was an explorer, anthropologist, photographer, big game hunter, and fisherwoman, who until 2000 held the record for the largest ever tuna (weighing some 700 lbs) caught in European waters. She was also considered one of the best-dressed women of her generation. However, the Broughton family was also tainted with scandal and instability. Isabella's grandfather (Vera's husband), Sir Jock Broughton, having sold off most of the family's assets to fund his extravagant lifestyle, was acquitted of the murder of the twenty-second earl of Erroll in Kenya in 1941 and committed suicide on his return to England in 1942.

Isabella's parents owned a house at 17 Cadogan Square, Chelsea, London, but she was brought up in a house on the Broughton estate at Doddington Park, Cheshire. Her brother John (b. 1962) died in an accident that she witnessed in 1964. Her parents were very distressed by their only son's death and Isabella felt that it led them to distance themselves from their daughters. One of Isabella's fondest memories of her childhood was trying on a 'giant pink hat' of her mother's. 'There's a photograph of me … and I look as happy as anything to be wearing it' (Philip Treacy, 11). When her parents separated in 1972 Isabella's mother left the children in the care of their father. After their divorce in 1974 her father married his third, much younger, wife, Rona Crammond, née Clifford Johns. Her father's remarriage strained his relationship with Isabella. On his death in 1993 his wife inherited the bulk of his estate, with each daughter receiving a token £5000.

Isabella Delves Broughton (known variously as Issy, Issie, Izzie, or Izzy) was a boarding pupil at Heathfield School, Ascot, from 1969 to 1975. She belonged to the Church of England and was head of chapel at school. When she left school she went to secretarial college and did various jobs before going to the United States. In the autumn of 1980 she attended the school of general studies at Columbia University in New York, where one of her classes focused on the arts in China. She lived briefly in west Texas before returning to New York. While still in the USA, in 1981 she married an Englishman, Nicholas Taylor, but they divorced in 1983. In 1982 the musician Brian Ferry and his wife, Lucy, introduced her to Anna Wintour, the editor of American Vogue, who hired her as her assistant. She went on to work at Vogue for André Leon Talley, organizing fashion shoots. In New York she became a friend of the artists Andy Warhol and Jean-Michel Basquiat. After her return to London she worked as a fashion assistant and then assistant editor at Tatler magazine from August 1985 to December 1989. On 18 November 1989, at Gloucester Cathedral, she married Detmar Hamilton Lorenz Arthur Blow (b. 1963), barrister, later art dealer and gallery owner. Detmar's family home, Hilles House, at Harescombe in Gloucestershire (designed by his grandfather, the architect Detmar Blow), became very important to Isabella and she enjoyed throwing it open to her friends and protégés.

After eighteen months working as a freelance for the magazine, in 1991 Isabella Blow joined the staff of British Vogue as a features associate, working there for the next three years. During this period she met the milliner Philip Treacy (in 1989) and the fashion designer Alexander McQueen (in 1991). Both were students but she immediately recognized their talent and craftsmanship and made it her mission to nurture and develop their careers. She was a confrontational and demanding mentor but affectionate, hugely enthusiastic, and generous with her contacts and her knowledge of history and art. She provided Treacy with space to live and work in the basement of her London home and purchased McQueen's entire degree show collection, paying in instalments. She also discovered the model Sophie Dahl and promoted the careers of the fashion designer Hussein Chalayan and the model Stella Tennant. They in turn loved her crazy imagination, daring flights of fancy, and earthy humour, which informed her fashion shoots. She was a natural member of the avant-garde. Her ability to spot new talent at an early stage and to facilitate it was her greatest gift and pleasure.

Blow was also passionate about finely crafted clothes and dressed with eccentric, theatrical flair. She had a vulnerable and fragile personality and considered herself ugly, but defied her looks and low self-esteem by drawing attention to her creativity and appreciation of beauty through her clothes. Treacy's hats, which she wore constantly, performed the function of exquisite, hand-made armour, and McQueen's skilful tailoring, which flattered her excellent figure, excited her and gave her confidence.

In 1997 Blow joined the Sunday Times as editor of Style magazine, working there until 2001. In 1998 she became a consultant for Swarovski and in 2002 for DuPont Lycra. In 2002 London's Design Museum celebrated her creative collaboration with Treacy with the exhibition ‘When Philip Met Isabella’ (also the title of a book). In the same year she rejoined Tatler, working as its fashion director until 2006 and then as a freelance fashion editor-at-large until May 2007. In 2004 she and her husband separated over money problems and their inability to conceive a child. They were reunited eighteen months later, but in 2006 she was diagnosed with cancer. Her illness, and fears that that her career had stalled, led to bouts of depression and several attempts at suicide. She died on 7 May 2007 at Gloucestershire Royal Hospital, Gloucester, from the effects of paraquat poisoning. Her funeral took place on 15 May 2007 at Gloucester Cathedral and her body was cremated. A memorial service was held at the Guards' Chapel, Wellington Barracks, London, on 18 September 2007. After her death the British Fashion Council renamed its fashion creator award as the Isabella Blow award for fashion creator in acknowledgement of her unerring support of British designers and her contribution to the international fashion industry. In June 2010 Daphne Guinness, a close friend, saved her wardrobe from dispersal at auction by purchasing it in its entirety in a private treaty sale.