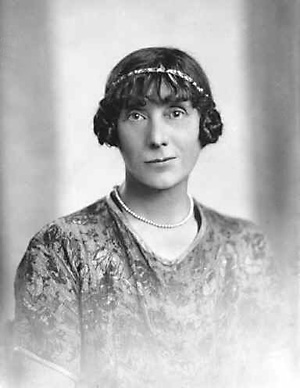 Pope, Jessie (1868–1941), poet and writer, was born at 11 Seymour Street, Leicester, on 18 March 1868, the second daughter (she had at least two sisters and two brothers) of Richard George Pope (1832/3–1903), commercial traveller and hop merchant, and his wife, Elizabeth, née Windover. She was educated at Craven House, Leicester, and the North London Collegiate School for Girls from 1883 to 1886. There she won the needlework prize, the scripture prize, and the English prize, and also passed the senior Cambridge certificate. The family moved to Hampstead, London, and she was living there with her parents, unmarried, at the turn of the twentieth century. By 1915 she had made her home at Lochleven House, Oak Lane, Finchley.

Pope began writing for Punch, her first contribution being an article about the Bushey Heath beagles hunt. Between 1902 and 1922 she contributed 170 poems to the magazine. Boasting that she 'never refused any work that was offered to her' (Lady's Realm), she was a prolific writer of humorous verse, articles, and short stories, which were published in many other popular periodicals of the early twentieth century, including the Daily Mail, the Daily Express, the Evening Standard, The Queen, and the Westminster Gazette, before being collected in such books as Paper Pellets (1906) and Airy Nothings (1909). She received accolades as the 'foremost woman humourist' who had 'nimble wit and a polished facility for rhyme and scansion' for her verse on subjects that varied from 'Love in a Car' and 'With the Beagles in Herts' to 'The Ideal Home' and 'Men I Might Have Married'. Airy Nothings contained the poems 'Any Woman to a Suffragette' and 'Any Suffragette to any Woman', which it could be argued show Pope taking a balanced view of the controversial fight for the franchise. While 'any woman to any suffragette' argues that

you see, as a class, we believe,That brawling is vulgar, dear Madam

'any suffragette to any woman' derides the 'protected shell' of non-campaigners and asserts that 'when our conflict's done',

With equanimity you'll takeThe vote which we have won.

In 1913 Pope learned of the existence of a manuscript of a novel of working-class life and struggle entitled 'The Ragged Trousered Philanthropists' by Robert Noonan (1870–1911; pseud. Robert Philippe Tressell). Noonan left the text to his daughter Kathleen, who was the nurse of one of Pope's neighbours. Pope 'thought it so strikingly good and original that I advised its being sent to a publisher' (Lady's Realm, 75) and after touting the text unsuccessfully to a number of firms Pope convinced Grant Richards to take it on. Richards, in turn, persuaded Pope to edit it. She was paid £24 in two instalments, Kathleen Noonan having sold the manuscript to Richards for £25. Pope's Herculean task was to cut the original 250,000 word text down to 100,000 words, reputedly only excising what she called 'superfluous material and repetition' from Noonan's often longwinded or laboured descriptions. But in reality she also cut what she and Richards considered offensive or subversive passages, and transposed material as well as eliminating a key character to create what one critic has called an expurgation rather than an abridgement that 'seriously disturbed the unity and the development of the novel' (Mayne, 77). It was published in 1914 and re-published in various editions throughout the 1930s and 1940s until printed in its original form by Lawrence and Wishart in 1955. Despite Pope's 'middle-class squeamishness', which led her to make unnecessary cuts in the novel, her effort with Noonan's work 'was beyond price' (Swinnerton, 28). Without her, The Ragged Trousered Philanthropists might never have seen the light of day.

Pope is perhaps best known—and indeed most vilified—for her patriotic poetry of the First World War. Published from 1914 onwards in newspapers like the Daily Mail, her verse was later collected in the volumes Jessie Pope's War Poems (1915), More War Poems (1915), and Simple Rhymes for Stirring Times (1916), as well as in charity gift-books such as The Fiery Cross (1915). Widely disseminated and widely read, her war poetry attracted both admiration and condemnation. The opening page of Jessie Pope's War Poems reproduces a facsimile of a letter sent from 'a soldier at the front' that proclaims her poems 'much admired by us all out here' and 'will be such a “buck up”' for the soldier's wife: 'bucking up means so much to those at home as well as for us. Really, they need it most, as after all, there is the most worrying suspense.' Poems like 'No!', with the insistent line 'Are we downhearted?' and its resounding affirmation of steadfastness from Tommy and General French, Jack the sailor, and even

may have indeed 'bucked up' those on the home front, but such widespread dissemination of poems like 'Play the Game', in which war is the ultimate sport and Englishmen are urged to 'get to work with a gun', sealed her reputation as a jingoistic, pro-war propagandist.

The glorification of combat in Pope's sing-song, doggerel rhyme eschewed the horrors of the battlefield and seemingly showed little regard for the suffering of soldiers. 'The Call', with its lines,

Who's fretting to begin,Who's going out to win?And who wants to save his skin—Do you, my laddie?

was only one among many that compelled Wilfred Owen to dedicate 'Dulce et decorum est' in his original manuscript 'To Jessie Pope, etc', then in a subsequent version 'To a Certain Poetess' before deleting the 'dedication' altogether in favour of the more cryptic reference to 'my friend' in the final lines that precede 'the Old Lie'.

Pope had no pretensions to literary greatness. In an interview in 1915 she made light of her talent for topical poetry saying, 'if you take a pen and sit and stare at a piece of blank paper long enough, something in the shape of a poem will come on it sooner or later', although she did list 'solitude and silence, a sense of rhythm, a fairly fluent vocabulary, and a patient determination not to be beaten by false starts' as other necessary attributes for the would-be versifier (Lady's Realm). Her hobbies, 'chiefly of the outdoor variety', included hunting, cycling, driving motor cars, playing golf, and swimming—she would fearlessly dive off seaside pierheads.

Pope's post-war books include a short novel, Love on Leave (1919), which told the story of a young Englishwoman's romance with an Anzac soldier, and another volume of verse, Hits and Misses (1920), only a few poems of which had the First World War as a theme. She continued to write for children, including verses for series of picture postcards A Day at the Fair (1928) and Fairy Wings (1928), and stories for illustrated books like Animal Fun and Frolic (1930). Aged sixty-one, she married, on 11 May 1929, a widower, Edward Babington Lenton (1866–1942), a retired bank manager, the son of Edward Chapman Lenton, also a bank manager. 'I have forsaken the delights of single blessedness, and am so happily married that they no longer attract me', she wrote to her editor at the publisher Grant Richards. They settled at Ivy House, Fritton, near Great Yarmouth. Life away from London, where she lived for most of her writing career, seems to have suited her.

Little is known of her later years, but letters in the Grant Richards archives reveal that in the 1930s she purchased back copies of her books from the publisher and asked that the rights be restored to her. She died on 14 December 1941 at Broom Hill House, Chagford, Devon, and was cremated at Plymouth.

While many continue to condemn Pope's First World War writing—she is represented as the worst example of the cold, female, non-combatant civilian—some critics have argued for a more subtle consideration of her writing. In the poem 'No!', for instance, 'among the compliant clichés and facile rhythms it is possible to hear a subtle denial of chivalric platitudes' (Dowson, 189). Her wartime pen was directed not only at so-called slackers, but also at war profiteers; readers were urged not to forget the sick children at Great Ormond Street Hospital or the wounded blind at St Dunstan's when considering outlets for their wartime charity. She demonstrated ways in which women could be active and 'show their grit' in such poems as 'Socks' and 'War Girls', and cajoled women on the home front to economize. Indeed, Owen may have cancelled his original 'dedication' to Pope because he recognized 'a tongue in a cheek' (Bebbington, 92).

Jessie Pope's verse is not 'great' literature; she was above all a writer of humour. That this humour rang hollow in light of the carnage of the western front was a fate not unique to this 'certain poetess'. It is perhaps the reason why she returned in her later years to the gentler subjects of animals and fairies in her verse and stories for children.