Distinguished men of science of Great Britain living in 1807–8 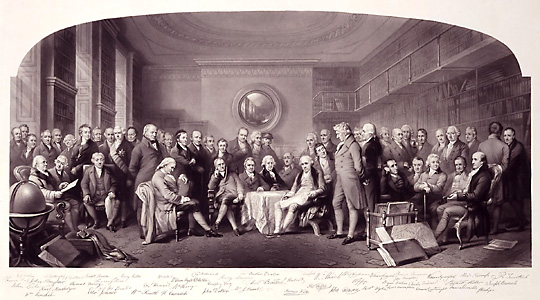 Distinguished men of science of Great Britain living in 1807–8

by George Zobel and William Walker, 1862

This year, 2007, witnesses a bogus bicentenary. The engraving entitled The Distinguished Men of Science of Great Britain Living in a.d. 1807/8, Assembled in the Library of the Royal Institution was begun in 1856 and published in 1862. It portrays an imaginary scene, set half a century earlier and situated in the newly furbished upper library of the Royal Institution in London, which had been founded in 1799 by Sir Benjamin Thompson, Count Rumford (represented centrally here, standing behind James Watt). The men it depicts never met as a group and the Royal Institution seems to have played no part in its production: the print is a composition of existing individual portraits, copied from oil paintings, drawings, or, in two cases, photographs. All but one of its subjects were dead by the time it was published. Yet not only does it illuminate the Victorians' perceptions of science and technology but it also testifies to their appreciation of the industrial revolution, twenty years before the term was reputedly introduced into English parlance by the historian Arnold Toynbee. It is exactly contemporary with Christian Schussele's Men of Progress, an American group portrait, equally fictitious and male, that differed in featuring only inventors and innovators, all nineteen of whom were alive at the time of its publication (Petroski, 88–94).

The printmaker and publisher was William Walker (1791–1867), the son of a salt manufacturer from Markton, near Musselburgh in Midlothian. He settled in London and produced over a hundred plates, including several historical group pictures. Distinguished Men of Science was his last work but possibly not a profitable one: while his investment was said to be £6000, the names of only 160 subscribers, paying from two to ten guineas per impression, are recorded. The smallest and cheapest prints measured 21 by 11 inches, the largest and most expensive 40 by 19 inches, embellished with the autographs of all the subjects. There are two known versions, one containing forty-eight figures, the other fifty-one (two were removed and five added). According to the National Portrait Gallery's catalogue the first is in pencil and wash, dated 1855–8: Frederick J. Skill drew the figures, Sir John Gilbert was responsible for their grouping, and William and Elizabeth Walker, his wife, are credited with its 'design and finish' (Yung, 648). The second is the published engraving of 1862, attributed to William Walker and George Zobel. Walker's son, also William Walker, compiled an accompanying volume of biographies, Memoirs of the Distinguished Men of Science of Great Britain Living in the Years 1807–1808 (1862). Since this enjoyed 'a considerable sale' independent of the engraving, he published a revised and slightly expanded edition in 1864. An etched frontispiece to Memoirs provided a numbered key to the group portrait.

Walker offered no explanation for either his choice of subjects or his selection of the date 1807–8. According to his prospectus they were all 'Eminent Men of Science, who flourished in this Country at the close of the last, and beginning of the present Century, and who were living in the years 1807–8'. (The word 'scientist' had been coined for students of the natural world by the Cambridge mathematician and philosopher William Whewell in 1833, but the more inclusive term 'man of science' continued in use throughout the century.) Walker referred only to 'the inestimable benefits which have resulted to mankind from the labours of these gifted men'; in particular, 'The Steam Engine, the discoveries in Chemistry and inventions of Machinery, now so skilfully applied to the vast numbers of our Manufactories, are the grand Main-Springs of our National Wealth and Enterprise'. His description of the print followed this outline, naming the subjects and their achievements; first, in the centre, James Watt, surrounded by engineers and, opposite them, chemists; second, grouped on the right, inventors of machinery; third, on the left and described more cursorily, astronomers, physicians, botanists, and geologists. If we were to apply an anachronistic distinction between 'scientists' and 'technologists' the latter would clearly predominate. Two-thirds (thirty-three) of these 'men of science' could claim to be inventors (including men better known for their scientific research, like W. H. Wollaston) and seven were civil engineers; by contrast eleven were renowned for their 'discoveries' in branches of natural philosophy, which had no immediate practical application. Even by the mid-nineteenth century there were very few opportunities to pursue a career in scientific research: the universities were still dominated by the classics, especially in England. Only sixteen of Walker's 'men of science' had attended a university (the majority of them in Scotland) and five were university professors (Sir John Leslie, John Playfair, and Daniel Rutherford at Edinburgh, Thomas Thomson at Glasgow, Richard Watson at Cambridge).

Walker's selection may have been influenced by Bennet Woodcroft, superintendent of the specifications at the Patent Office and guiding star of the new Patent Museum: the portraits of inventors, collected by Woodcroft, provided him with an acknowledged, rich resource. Currently embroiled in the ‘patent controversy’, which threatened the patent system with abolition, Woodcroft must have welcomed the opportunity to help Walker present inventors in a positive, patriotic light. When Walker began his project in 1856 the names of few inventors and engineers were known to the public: it was three years before Samuel Smiles published Self Help, one of four collective biographies featuring inventors that appeared in 1859. More specifically the Crimean War (1854–6), which had prompted numerous comments on the burgeoning contribution of men of science to Britain's war effort, may have provided the spark. Walker depicted them as cultivated men of the Enlightenment, socializing in a library, yet contemporaries would have been aware that, in 1807–8, not only was Britain entering 'the era of manufactories' but it was also at war with Napoleon's France.

The decision to place James Watt at the centre of the composition was straightforward. Since his death in 1819 Watt had been elevated into the national pantheon, his steam engine presented (with gross exaggeration) as the beating heart not only of Britain's industrial strength but also of its military might. Leading liberal politicians and economists, manufacturers, and men of science had joined Watt's son, James Watt, in erecting statues to his memory in London, Glasgow, and Greenock; their rhetoric and a host of publications hymned his genius and irreplaceable historical significance. They established the concept of industrialization as a series of steam-powered technological innovations, beginning in the late eighteenth-century cotton industry. Once applied to shipping and to railway locomotives, steam power promised to spread British manufacturing predominance, peace, and the Christian gospel around the globe—enforced, where necessary, by the Royal Navy.

Watt was not alone in having helped, directly or indirectly, to resist Napoleon. Joining him, in the centre of the composition, were not only his associates in the steam-engine business in Birmingham, Matthew Boulton, William Murdock, and John Rennie, but also the three engineers, Samuel Bentham, Marc Isambard Brunel, and Henry Maudslay, who had installed innovative machinery to produce ships' pulley-blocks in the royal dockyard at Portsmouth, and his close friend Captain Joseph Huddart, whose invention of steam-driven machinery had improved the quality of the ropes that ran through those blocks on sailing ships. The coterie on the right of the picture includes two pioneers of steam shipping, William Symington and Patrick Miller; Watt's and Maudslay's firms became early major suppliers of steamships to the Royal Navy. Civil engineers such as Thomas Telford, William Chapman, William Jessop, and Robert Mylne (standing together, to Watt's left) had designed docks, as well as bridges, canals, and roads, all of which had both military and civilian uses; next to them Bryan Donkin, manufacturer of novel paper-making machinery, also devised methods of preserving food, which extended the time that ships could remain at sea; Richard Trevithick, on the far right, was a pioneer of steam railways. Munitions had a single explicit representative in Sir William Congreve, famous for his eponymous rockets.

Walker included several instrument makers, responsible for improved chronometers, telescopes, and other navigational and surveying instruments: Edward Troughton (with his hearing trumpet) is next to Donkin on the right, but Peter Dollond is among the astronomers, geologists, and cartographers on the far left. For it is evident that the natural philosophers were present not only to parade such glorious achievements as Sir William Herschel's discovery of the planet Uranus, but also to insist on the utility of scientific research. Herschel, seated symbolically beside the globe, is surrounded by astronomers and mathematicians. Among them are the astronomer royal, Nevil Maskelyne (conversing with Herschel), and Francis Baily, whose Nautical Almanac allowed mariners to fix their position at sea. As an officer in the British army Henry Kater was employed in the great trigonometrical survey to map India; his subsequent researches helped determine national standards of weights and measures. Also prominent on the left side of the picture are the physician and inventor of smallpox vaccination Edward Jenner (seated and holding a handkerchief); the botanist and president of the Royal Society of London Sir Joseph Banks (wearing a sash); and, next to him, the founder of stratigraphical geology, William Smith. While vaccination was credited with a crucial role in preserving Britain's army and navy from disease, the botanists were introducing valuable new crops from other continents, and the geologists' discoveries were benefiting Britain's coal and metallurgical industries.

Watt was recognized not only as an engineer but also as a chemist, contesting with Henry Cavendish (seated submissively opposite him) the credit for discovering the chemical composition of water. Across the table sits a pensive John Dalton, whose tabulation of atomic weights had revolutionized chemistry; behind him stands a knot of other chemists, including Sir Humphry Davy, most famous for his miner's safety lamp, and Edward Charles Howard, the wealthy patentee of sugar-refining equipment. Another manufacturing chemist, Charles Tennant, is seated on the right of the picture, between Samuel Crompton (his head on his hand) and Edmund Cartwright, both inventors of textile machinery. Tennant's chlorine bleach was as crucial as their machines to Britain's dominance of the cotton industry. Cartwright admires the stereotype printing plate held by Charles Stanhope, third Earl Stanhope; between them Sir Francis Ronalds represents that other medium of fast communication, the electric telegraph.

Walker's print celebrated not only the intellectual achievements of British men of science but also their important contribution to the country's international predominance, where military and commercial advances were closely entangled. These men were 'civic experts', whose 'numbers … were increasing along with the expansion of trade, war, and imperialism' (Shapin, 182).

Walker's omissions are as interesting as his inclusions. Among those in the eligible cohort Walker's contemporaries might have remarked his preference for Trevithick over George Stephenson (as ‘father of the locomotive’), or for Murdock over other pioneers of gas lighting. Some leading men of science had died too early; others were perhaps too young in 1807–8, explaining the omission of Michael Faraday or Charles Babbage (both then sixteen). This all raises the question of why Walker chose 1807–8. In the absence of other explanations one may speculate that Walker, a Scot long resident in England, was quietly celebrating the centenary of the Act of Union of 1707. The focal point of his print was his fellow Scot James Watt; a disproportionate number of its other subjects (fourteen) were also Scots; above all, they were the 'distinguished men of science of Great Britain', a national identity created by that act.