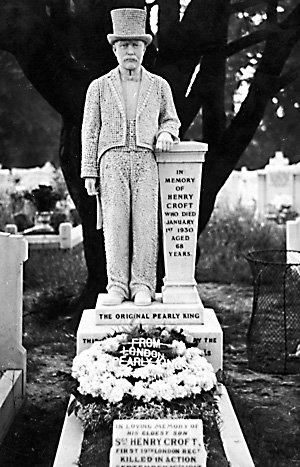 Croft, Henry [called the Original Pearly King] (1861–1930), road sweeper and founder of the pearly tradition, was born on 24 May 1861 at St Pancras workhouse, 4 King's Road (later St Pancras Way), Somers Town, London, the son of Henry Croft (1828/9–1871?), musician, and his wife, Elizabeth, née Gibbs (b. 1836/7). He was baptized at the workhouse on 5 June 1861. Following the death of his father, probably in the early 1870s, Croft was sent to the St Pancras orphanage and in 1876 began work as a road sweeper at the Barnaby Street department of the St Pancras vestry. He remained in this employment, for the vestry and subsequently for St Pancras metropolitan borough council, until the late 1920s (St Pancras Gazette, 10 Jan 1930).

On 21 February 1892 Croft married, at Bedford New Town Chapel, St Pancras, Lily Newton (1874–1940), of Kentish Town, the fourth child of John Newton, a house painter, and his wife, Caroline; by the early 1880s the Newton family had moved to Somers Town—being resident at 22 Drummond Street and then at 22 Little George Street—with Lily employed as a domestic servant (census returns, 1881, 1891). During the early 1890s Henry and Lily Croft lived at 67 Stibbington (now Chalton) Street, St Pancras, moving by 1901 to 1 Edward Street with their three daughters and one son. In the following decade the couple had a further two sons and two daughters and by 1911 the family was resident at 15 Charles (now Phoenix) Street, their eldest child, Lily Constance, then being employed as a perfumer, and their eldest son, Henry, as a general engineer.

Croft's origin as the first pearly king, and the early development of pearly dress and customs, is only partially documented and remains somewhat speculative. In the mid- to late 1870s, possibly in 1879, Croft began adorning his clothing with mother-of-pearl buttons, then a fashionable form of decoration produced in factories in London's East End (Daily Mirror, 23 May 1934). Popular accounts state that Croft took the idea from the relatively modest decorations worn by Somers Town costermongers, though the extent to which pearl buttons and ‘flash’ dress were then features of costers' working attire is debatable. Writing on coster dress in the mid-nineteenth century, Henry Mayhew had noted that 'mother-of-pearl buttons are preferred' only for fabrics 'of a dark rat-skin hue', and that on other suits 'plain brass' or 'sporting buttons' were favoured (Mayhew, 1.51). Later reports both confirmed and questioned the practice, the costermonger being variously 'a fine fellow … in all the glory of pearlies and bell bottoms' (Pall Mall Gazette, 24 March 1888) or one who, in his ‘true’ guise, would 'never dream of sporting such buttons' (G. R. Sims, ed., Living London, 3 vols., 1896, 2.77). Given that Croft's pearly suits were distinguished by their abundance of buttons (in contrast to the simpler decoration of costermongers' trousers and waistcoats), a more likely inspiration may have been London coster-singers, among them Hyram Travers, who was then performing as the ‘Pearly King’, dressed in 'the handsomest and most costly suit of clothes ever seen' (The Era, 20 Jan 1883). Though unattributed, a later report by one of Croft's associates claimed his pearl-covered suits derived from a local music-hall entertainer 'who wore a stage costume entirely covered in brass buttons' (quoted in Binder, 154).

Croft's first suit, which dates from about 1880, took the form of a ‘smother’ suit—that is, one where the fabric is covered by many thousands of buttons, and so distinct from the relatively sparse ‘skeleton’ suits, which Croft also produced. He is thought to have created seven suits for himself, two of which were bequeathed at his death—as well as suits for others and a range of pearly hats, caps, belts, ties, and an overcoat using more than 30,000 buttons and weighing approximately 25 kilograms (Daily Express, 13 July 1926). His reason for developing the pearly suit seems to have been philanthropic. Dressing in this way Croft would have drawn attention to himself when taking part in charitable pageants and carnivals. These had become an increasingly important means of hospital fund-raising in working-class areas of London from the 1870s, and Croft's first appeal in pearly costume seems to have been for the London Temperance Hospital, Hampstead Road, in the following decade.

While there were theatrical ‘pearly kings’ from at least 1883, the earliest known printed reference to Croft in this guise is a letter and photograph in the Strand Magazine for February 1902, identifying 'Mr F. Croft' as the 'Pearlie King of Somers Town' and describing his suit of 4900 buttons (Strand Magazine, 23, 1902, 236). Over the next decade a London-wide network of pearly dynasties was established, so that by 1911 each of the capital's 28 boroughs boasted a pearly king, queen, and family—numbering in total about 300 individuals. Some drew on established local hierarchies of costermongers, though, as obituaries pointed out, Croft himself was never engaged in street trading. In 1911 Jim Marriott, the second pearly king of Finsbury, founded the Original Pearly Kings' and Queens' Association, which gathered at Britannia Street, King's Cross, while families south of the Thames were connected to the Pearly Kings' and Queens' Guild, established by the chimney sweep and Southwark king, Fred Tinsley (1892/3–1967).

To what extent, if any, Croft was involved in these organizations remains unclear. Subsequent newspaper references drew attention to his appearances at the sporting and social events with which pearlies became associated during the early 1900s. In June 1907, for example, Croft—'the Pearly King'—took part in the Horse of the Year show, Olympia, and, on such an occasion, was presented to Edward VII and Queen Alexandra by the earl of Lonsdale (Daily Express, 11 June 1907; St Pancras Chronicle, 10 Jan 1930). Croft returned to Olympia five years later in a demonstration of costermongers and their donkeys which featured 'at least half a dozen “Pearly Kings”' including 'the super-king … Mr Henry Croft, of Euston-road, who wore a frock coat literally covered with “pearlies”' (Daily Express, 29 June 1912). Other appearances were made at coster-organized events, among them the annual Crystal Palace donkey show at which, in 1910, Croft 'the Pearly King' proved 'one of the most picturesque figures' (London Journal, 13 Aug 1910, 381). Elsewhere he was identified for his participation in charity work. In June 1922, for example, 'Brother Croft'—'the pearly king of the world'—was one of several monarchs raising money for the ex-servicemen's charity St Dunstan's in Regent's Park (The Times, 16 June 1924). Other organizations supported by Croft included the Hospital Saturday Fund, the Sons of Phoenix temperance society, and a fund set up following the Thames floods of 1928 for which he raised £72 and received a medal from the lord mayor (St Pancras Chronicle, 10 Jan 1930). The giving of medals or ribbons in recognition of collections became commonplace and, after 'lifelong work for charity', he was said to have received 2000 such awards and to have raised between £4000 and £5000 (The Guardian, 4 Jan 1930).

Croft's reputation as the originator of the pearly tradition was evidently something he took seriously and sought to maintain. In July 1926 he made his only known public statement in order to rebuke would-be 'claimants to his title' and to assert that he was 'the only original Pearly-King in London'. With Croft then recovering from surgery at the London Temperance Hospital, it was his daughter Elizabeth who explained how her father had been 'much upset that his undisputed title has been questioned' since his 'life hobby' of 'pearlies and collecting' had raised 'more than £4000 for hospitals' (Daily Express, 13 July 1926). The nature of any challenge to Croft's title remains unclear, though several contemporary newspaper reports refer to others as being the ‘original’ pearly king. As the pearly tradition developed, it seems unlikely that Croft played much, if any, part in notable social events such as the costermongers' and pearlies' annual harvest festival, which was held at St Mary Magdalen, Bermondsey, between 1924 and 1956.

Henry Croft died from lung cancer on 1 January 1930 at his place of birth, St Pancras workhouse, 4 King's Road, London. He was buried on 8 January at St Pancras cemetery, East Finchley, after a funeral procession from Charles Street which comprised a horse-drawn hearse, Irish pipers, 400 pearly kings, queens, and family members, and representatives of Croft's chosen charities and organizations, with the proceedings captured by Pathé News. Local reports described a man 'well-known in every quarter of London' whose funeral cortège was, at nearly half a mile in length, 'one of the largest that London has seen for many years' (St Pancras Gazette, 10 Jan 1939). The hearse that carried Croft's coffin was subsequently used, at the singer's request, for the funeral of Ian Dury in April 2000.

In 1931 a full-size marble statue of Croft was commissioned by several of his favoured hospitals and collecting societies, though it remained with a Tottenham stonemason for more than two years while sufficient funds were collected. The statue depicts Croft (who stood no more than 5 feet in height) in a smother-style tail coat of 30,000 buttons, with top hat and cane, and bears the legend 'the original Pearly King of the world'. It was finally unveiled at St Pancras cemetery on 30 May 1934 at a ceremony attended by up to 500 people, many of them members of pearly royalty, and was dedicated by the Congregational minister, the Revd Albert D. Belden, who commemorated Croft's lifetime assistance to 'suffering humanity in London hospitals' (Pathé newsreel, 4 June 1934). Croft was survived by his wife and by eleven of his twelve children—his eldest son, Henry, had been killed in action in September 1917. Lily Croft died on 25 January 1940 and was buried with her husband on 1 February.

In 1974 one of Croft's seven pearl suits was rediscovered in an attic in Romford, Essex, though it remains in a private collection (Evening Standard, 27 April 1974). In 2002, after repeated acts of vandalism, his statue was restored and moved from St Pancras cemetery to the crypt of St Martin-in-the-Fields, Westminster, where members of the Original Pearly Kings and Queens Society have held their harvest festival since 1956. Similar festivals are held at St Paul's, Covent Garden, and St Mary-le-Bow, Cheapside, by the London Pearly Kings and Queens Society, in which association Henry Croft's great-granddaughter became queen of Somers Town in the early twenty-first century.