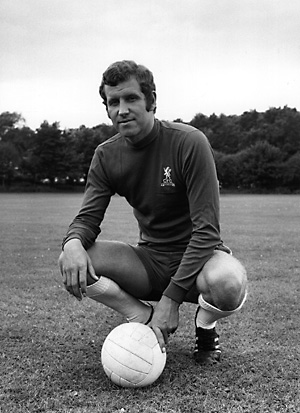 Osgood, Peter Leslie (1947–2006), footballer, was born on 20 February 1947 at 26 East Crescent, Clewer Without, near Windsor, Berkshire, the son of Leslie Frank Herbert Osgood, bricklayer, and Ivy Lillian Rose Ashley, née Cowley. He attended Clewer Green primary school in Hatch Lane, Windsor, and Dedworth secondary modern school. On leaving school he followed his father into the building trade. He had played schoolboy football for the Slough and district team and for the local youth club at Spital. He applied for a trial at Reading Football Club but heard nothing from them. When offered a trial by Arsenal FC he turned them down. His uncle Bob then wrote a letter about his nephew to Chelsea FC, who duly signed up the young Osgood as an amateur in 1964. Osgood scored a hatful of goals for the reserves and Chelsea's manager, Tommy Docherty, soon offered him a professional contract. His first team début followed on 16 December 1964 at Stamford Bridge, the Chelsea ground, in a fifth round tie of the league cup against Workington Town. Osgood scored both the Chelsea goals in that match, which they won 2–0, and his career was launched. Three days later he married his first wife, Rosemary Heather Snow, an eighteen-year-old bank clerk from Windsor, and daughter of Eric Randolph Snow, gardener. They had two sons, Anthony (b. 1965) and Mark (b. 1967).

Tall (at 6 feet 2 inches) and lean (he weighed only 12 stone), Osgood had remarkable control with both feet, strength, positional sense, and personal courage. In an era when football was a notably physical game and centre-forwards could expect to suffer for their skills, centre halves rarely got the better of him. Osgood—known to everyone as Ossie—moved with elegance and speed on the pitch; off it there was always something of a swagger to his style. Whether remonstrating with referees or conducting an interview with journalists, his face was always likely to break into a knowing, mischievous grin. He was admired almost as much for his jack-the-lad cheek and bravado around the pubs and boutiques of the King's Road in Chelsea as for his panache on the ball.

So impressive were his performances in his early matches that, though only nineteen, Osgood was named in the forty-man squad picked in April 1966 by Alf Ramsey, the England manager, for the forthcoming world cup. In the event Osgood was not a member of the final squad of twenty-two. He suffered a broken leg after a tackle from Emlyn Hughes, then playing for Blackpool, in October 1966, and missed the rest of the 1966–7 season, including Chelsea's FA cup final defeat by Tottenham Hotspur. When he returned to the first team he was probably slightly slower on the ball but also more guileful; what he had lost in pace he made up for in skill. There followed the best years of his career, when he was the spearhead of a Chelsea team of all the talents between 1967 and 1971. In 1969–70 he was the first division's top scorer, with thirty-one goals. Chelsea won the FA cup in that season, defeating their close rivals Leeds in the first final ever to have gone to a replay after a 2–2 draw at Wembley stadium. Osgood scored a brilliant diving header to equalize the scores at 1–1 in the second match at Old Trafford, which Chelsea eventually won 2–1. In the following year, again after a replay, Chelsea brought home the European cup winners' cup after defeating an ageing Real Madrid side 2–1 in Athens. Osgood scored in both matches.

Osgood's success as a player cannot be separated from the talents around him. Several Chelsea players of that era, including the goalkeeper Peter Bonetti, the defender and club captain Ron Harris, the midfielders John Hollins and Alan Hudson, and Osgood's partner in the Chelsea attack, Ian Hutchinson, were on the fringes of the England team. Two more, the full-back Eddie McCreadie and the midfielder Charlie Cooke, were regular choices for Scotland. Together the team played some of the most attractive football of the age, though their relatively modest achievements in the Football League were evidence of their inconsistency: Chelsea were a team for the big occasion rather than the weekly challenge of first division combat. They were also the team that most closely mirrored the style of the age: situated close to the fashionable parts of west London, the Chelsea team were the ‘kings of the King's Road’, celebrities who attracted the support of other celebrities in turn. Osgood apparently charmed Raquel Welch, the Hollywood film goddess then at the height of her fame, and she is said to have once run along the touchline waving to him. When he scored his hundredth goal for Chelsea he returned to the dressing room to find Steve McQueen, the most charismatic film actor of the era, awaiting him.

Osgood had played for England at youth and under-twenty-three level but he only won four caps as a full international and only started the match in the first and last of those games, against Belgium in February 1970 and Italy in November 1973. He was a member of the 1970 Mexico world cup squad and came off the bench in the games against Czechoslovakia and Romania. That Osgood was overlooked in this way has been put down to the caution and conservatism of Ramsey, who liked obedient, respectful, and hard-working players and was instinctively mistrustful of flair, especially when displayed fitfully and with a confident and defiant attitude. But it was also owing to the plethora of good forwards of different styles who graced the English game in the late 1960s and early 1970s: Geoff Hurst, Jeff Astle, Francis Lee, Martin Chivers, Allan Clarke, and later Malcolm Macdonald were a formidable clutch of competitors for the centre-forward's jersey.

Osgood scored in Chelsea's 2–1 defeat by Stoke City at Wembley in the 1972 league cup final. The match marked the beginning of Chelsea's decline. A series of disputes between several crucial players and the Chelsea manager, Dave Sexton, marred the next two years and eventually the team was broken up. Osgood was placed on the transfer list and sold to Southampton for £275,000, a club record, in March 1974. He spent three years there, scoring thirty-six goals in 157 games, and helped the Saints to victory in the 1976 FA cup final against Manchester United, the firm favourites. While at Southampton he enjoyed a brief stint on loan to Norwich City. He then played for the Philadelphia Furies in the United States, where he managed only a single goal in twenty-three matches. Finally, at the end of 1978 he returned to play ten more matches for Chelsea but neither he nor they were the forces they had once been and a year later he retired. In all he played 376 games for Chelsea and scored 152 goals for them.

Like many former footballers Osgood went into the pub business, teaming up with his former partner in the Chelsea attack, Ian Hutchinson, but was declared bankrupt in 1985. He then turned back to football and was variously youth team coach at Portsmouth, in public relations for Southampton FC, a match day host at Chelsea, and a popular after-dinner speaker who evoked the nostalgia of his audiences for the players and games of their youth. His first marriage having ended, on 17 October 1980 he married Philippa (Pippa) Cooke-Smith, a 29-year-old airport stewardess, and daughter of Richard Anthony Wellwood Cooke-Smith, civil aviation director. The marriage ended in divorce, and on 1 June 1987 Osgood married, as his third wife, Lynnette Ann Finlay, a 34-year-old airline receptionist, and daughter of Raymond Noël Thorogood, contracts engineer. They had one son, Darren (b. 1989). Osgood overcame alcoholism but died of a heart attack after collapsing at the funeral of a family member in Slough on 1 March 2006; he was declared dead at Wexham Park Hospital. A memorial service, including the band of the Coldstream Guards, was held for him at the Shed End of the Stamford Bridge stadium on 1 October 2006. His ashes were buried under the penalty spot. He was survived by his three sons and by his third wife, Lynnette, who served as the director of the Peter Osgood Trust, helping disadvantaged children to fulfil their potential through football.