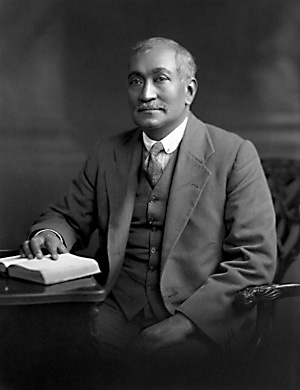 Ali, Abdullah Yusuf (1872–1953), Indian civil servant and Islamic scholar, was born on 4 April 1872 in Surat, Gujarat, India. His father, Yusuf Ali Allahbuksh, otherwise Khan Bahadur Yusuf Ali, a Shi'i in the Dawoodi Bohra tradition, had abandoned the traditional occupation of his community, business, and entered instead the police force, being presented on retirement with the title of Khan Bahadur for public service.

Abdullah Yusuf Ali was first educated at the Anjuman Himayat-ul-Islam school in Bombay, and subsequently at a missionary school there, Wilson College. Having graduated with a first-class mark, he won a scholarship to St John's College, Cambridge, in 1891. After graduation, he passed the Indian Civil Service examination in 1894 with flying colours, and was called to the bar by Lincoln's Inn two years later. His service in various districts of the United Provinces was interspersed with two short stints as acting under-secretary (1907) and then deputy secretary (1911–12) in the finance department of the government of India. On 18 September 1900, while on leave in England, he married, at St Peter's Church, Bournemouth, Teresa Mary Shalders (b. 1873), daughter of Isaac Noah Shalders, accountant. They had three sons and a daughter.

A man of very considerable intellect and wide interests, Yusuf Ali found bureaucratic routine frustrating and unfulfilling. He was allowed to retire with a comfortable pension in 1914 on grounds partly of health and partly of family anxieties. Retirement enabled him to devote time to writing and other pursuits close to his heart, dividing his time and travelling frequently between India and Britain.

Yusuf Ali belonged to the group of Indian Muslims from professional families who were concerned with rank and status. In pursuit of his aspiration for influence, deference, if not outright obsequiousness, became a central feature of his relationship with the British. During the formative phase of his life he mingled mainly in upper-class circles, assiduously cultivating relations with members of the English élite. He was particularly impressed by the apparently genteel behaviour and cordiality of those with whom he associated, and, as a result, became an incorrigible Anglophile. His marriage to Teresa Shalders according to the rites of the Church of England, his hosting of receptions for the good and the great, his taste for Hellenic artefacts and culture and fascination for its heroes, his admiration for freemasonry in India as a way of bridging the racial and social divide, and his advocacy of the dissemination of rationalist and modernist thought through secular education were all genuine attempts to assimilate into British society.

Yusuf Ali prized his membership of the British empire and was a loyal supporter of its sovereign. When the First World War broke out, in contrast to many Muslims in Britain who felt a great deal of unease in supporting the war effort against the Ottoman empire, he declared his unequivocal backing for Britain's cause in jingoistic articles, public speeches, and a lecture tour of Scandinavia. Likewise, during the Second World War, he reassured Britain of Indian Muslims' loyalty and wrote propaganda pieces in favour of the war effort.

In his personal conduct Yusuf Ali scrupulously adhered to the religious ritual of his faith, attending prayers and festivals as required. He maintained close ties with the small but growing British Muslim community in London, helping to give it organizational shape. A trustee of the Shah Jehan Mosque in Woking, he occasionally led congregational prayers there. He was elected a trustee of the London Mosque Fund in 1921, which later financed the purchase of the premises for the East London Mosque. In India he focused much of his energy on the educational challenges facing Muslims. He was twice principal of Islamia College, Lahore, from 1925 to 1927 and from 1935 to 1937. He was also a fellow and syndic of Punjab University (1925–8 and 1935–9) and a member of the Punjab University enquiry committee (1932–3). Among his publications were Muslim Educational Ideals (1923) and Moral Education: Aims and Methods (1930).

Yusuf Ali's scholarship of Islam, to which he brought his intimate knowledge of Arabic and a lifetime study of the principles and history of the religion, was widely recognized. Through both word and deed he attempted to change the widespread negative perceptions of Islam in the West. In a series of pamphlets entitled 'Progressive Islam' he attempted to demonstrate that Islam could make a useful contribution to Western civilization. Driven by his loyalty to the empire, he argued against pan-Islamism and in favour of the depoliticization of Islam. He sought to show that religion was essentially a personal and spiritual matter. That in 1936 he preached a sermon at the Unitarian Church in Cheltenham to a packed congregation is a testimony to his belief in the basic unity underlying all religions. Having been closely associated with interfaith dialogue, he was one of the key speakers at many of the World Congress of Faiths conferences. His books included Fundamentals of Islam (1929), Personality of Man in Islam (1931), and The Message of Islam (1940), but he was best known as a translator of the Qu'ran, his translation and commentary (1934–8; rev. edn, 1939–40) remaining, fifty and more years after his death, one of the two most widely used English versions (the other being the translation by Marmaduke Pickthall).

The British government much appreciated Yusuf Ali's services, especially as a publicist, and he was duly rewarded. Even before the First World War he received flattering notices in the press. The Times described him as 'a very talented member of the Indian Civil Service and a representative of the great Mahomedan community' (The Times, 24 Jan 1907). In 1917 he was appointed CBE for his services to the empire. He was appointed as an adviser to the Indian delegation at the Paris peace conference in 1919, while in 1928 he represented India at the assembly of the League of Nations in Geneva. In 1929, he was elected fellow of the Royal Empire Society. He was also a fellow of the Royal Society of Literature.

Yusuf Ali's pursuit of a harmonious union of East and West at a personal and intellectual level, however, proved unsuccessful. His first marriage ended in a difficult divorce. In 1920 he married Gertrude Annie (Masuma) Mawbey (1895–1984), daughter of Thomas Mawbey, a nonconformist Derbyshire printer, and they had one son, Rashid (who served with the Indian Army during the Second World War), but he and his second wife had drifted apart well before his death. For all the services he had rendered, he died estranged from both his family and a British establishment that, following Indian independence, no longer had any use for him. In his old age, with his mental faculties deteriorating and desperately in need of proper care, he lived in isolation. Of no fixed abode (his address was given as the Royal Empire Society, Northumberland Avenue), he spent most of the last decade of his life wandering about. Eventually, in December 1953, found on the streets in a bewildered condition by the police, he was taken to a home for the destitute, and he died, unnoticed, the following day (10 December) at St Stephen's Hospital, Fulham, of heart failure. His funeral and burial at the Brookwood cemetery close to the Woking mosque was arranged by the Pakistan high commission. He left an estate valued at £20,578 which, after various small legacies, he bequeathed to the University of London for the benefit of Indian students.