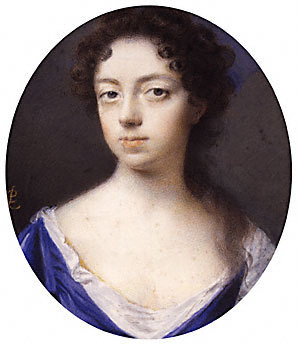 Finch [née Kingsmill], Anne, countess of Winchilsea (1661–1720), poet, was born in April 1661 at Sydmonton, Hampshire, the youngest of three children of Sir William Kingsmill (1613–1661), son of Sir Henry Kingsmill [see under Kingsmill family] and Bridget White, and Anne Haslewood (d. 1664), daughter of Sir Anthony Haslewood and his wife, Elizabeth Wilmer, of Maidwell, Northamptonshire. Her parents were descended on both sides from old and respected families. The Kingsmills had over four centuries of royal service and acquired valuable estates from Henry VIII, and Thomas Fuller's History of the Worthies of England (1662) refers to the Haslewoods as a 'very ancient' and 'worshipful family in Northamptonshire' (1.286).

Her mother, widowed just a few months after Anne's birth, a year later married Sir Thomas Ogle, and a half-sister was born. Following her mother's death in 1664, Anne and her two Kingsmill siblings became involved in complicated but successful litigation on their behalf against Ogle. Young Anne was raised in London with her paternal grandmother until the age of eleven, and then with her uncle, Sir William Haslewood, at Maidwell in Northamptonshire.

In 1682 Anne Kingsmill became a maid of honour to Princess Mary of Modena, and, in the environment of the famed Restoration court wits, began secretly to write poetry, fearing, as she was later to acknowledge in the preface to the privately circulated manuscript of her poems, that she might be ridiculed as a 'Versifying Maid of Honour' (Finch, Poems, ed. Reynolds, 7–8). On 15 May 1684 she married Heneage Finch (1657–1726), second son of Heneage Finch, third earl of Winchilsea. Her husband, gentleman of the bedchamber to the future James II, then duke of York, was a courtier and soldier with a promising public career. She resigned her court position, but the couple resided in Westminster Palace and, through her husband, she maintained her close ties with the court.

After her marriage Anne Finch took up writing more seriously. In addition to a number of love lyrics to her husband, she wrote songs and religious verses, as well as a tragicomedy entitled 'The Triumphs of Love and Innocence'. Her preoccupation with comedy and songwriting was cut short, however, by the revolution of 1688. With the flight of James II to France and the crowning of William and Mary early the following year, the couple's hopes for public life were ended. Remaining loyal to the Stuart cause, Heneage Finch and his wife fled London, and resided with various family members in the countryside. On 29 April 1690 Heneage was arrested while attempting to join James in France, and charged with Jacobitism. For the remainder of that year Anne Finch stayed in Kent at Godmersham, while her husband remained in London until the case was finally dismissed from the court of king's bench. During this period she wrote several poems of a political nature (for example, 'The Change', 'Caesar and Brutus', and her elegy 'On the Lord Dundee') or expressive of personal anguish (for example, 'The Losse', 'On Affliction', and 'A Song on Greife'). She also wrote a tragic play, 'Aristomenes, or, The Royal Shepherd'; this, she explains in the prose preface, was undertaken as a distraction, for otherwise 'such dejection of mind, cou'd not have been supported' (p. 12).

Once reunited the couple settled in Kent at the Eastwell estate of Heneage's nephew Charles, who had succeeded Heneage's father as the fourth earl of Winchilsea, and for several years at nearby Wye College. Finch's marriage, which was childless, proved advantageous to her poetry; her husband, who served as a lifelong editor and transcriber of her poems, strongly encouraged her in her writing. 'To Mr. F. now Earl of W', for example, is addressed to Heneage, who, 'going abroad, had desired Ardelia [Finch's poetic name for herself] to write some Verses upon whatever Subject she thought fit, against his Return in the Evening'. Her first publications (all appearing anonymously) were love lyrics, including two set to music: 'Tis strange this heart', set by R. Courteville and published in Vinculum societatis in 1691, and 'Love, thou art best of human joys', set by Henry Purcell and included in a popular collection of songs in 1694 (Comes amoris, or, The Companion of Love). Six of her religious poems were published in the Miscellanea sacra (1696).

Finch's poems cover a wide variety of genres and subject matter. In addition to religious verse and love lyrics, she wrote fables, nature poems, verse plays, odes, songs, pastorals, and occasional poems to friends and relatives. Women play a prominent role in her poetry, from satirical poems (such as 'The Unequal Fetters' and 'An Epilogue to the Tragedy of Jane Shore') that deal with gender issues and the inequality of women in contemporary society, to numerous poems that celebrate women's intelligence and resourcefulness.

Finch's best-known poem during her lifetime was 'The Spleen', published anonymously in 1701 in Charles Gildon's New Miscellany of Original Poems. This Pindaric ode examines the social and personal implications of spleen, or melancholy, a malady with which she was afflicted throughout her life and to which her poetry contains numerous references (from her early 'Ardelia to Melancholy' to 'A Suplication for the Joys of Heaven', written in her late fifties, just a couple of years before her death).

In 1708, after two decades of rural retirement, the Finches returned to London. As active nonjurors and Jacobites they continued to be political outcasts and under the threat of government reprisals, but the return to London brought with it some beneficial literary relationships, as well as significant publications. In 1709 Delariviere Manley included two of Finch's poems in The New Atalantis and Jacob Tonson's prestigious Poetical Miscellanies published three of her pastoral poems ('A Pastoral Dialogue between Two Shepherdesses', 'Adam Pos'd', and 'Alcidor') bracketed between two poems by Jonathan Swift and Alexander Pope's first publication, his 'Pastorals'. Richard Steele hailed the miscellany as 'a collection of the best pastorals that have hitherto appeared in England' (Tatler, no. 10).

With the death of his nephew Charles in 1712, Heneage Finch became fifth earl of Winchilsea and Anne became a countess. However, for the next eight years, until just a few months before her death, the Eastwell estate was involved in complex litigation and financial difficulties inherited from the former earl. Moreover, because Heneage Finch continued to refuse to take the oaths of allegiance, he was denied his seat in the House of Lords. Thus, despite the return to a more public life and the evident advantages of involvement with some of the most prominent writers of the day, Finch and her husband continued to remain political and, to an extent, social outcasts.

The year following her husband's accession to the peerage, Miscellany Poems, on Several Occasions, an anonymous collection containing eighty-six of Finch's poems and her play Aristomenes, was brought out by John Barber, also a Jacobite, and a friend of Swift. Subsequent title-pages that year identified the author as Lady Winchilsea. Various theories have been put forth to account for Finch's overcoming her earlier reluctance to publish: her new-found status as a countess (Messenger); the more favourable political climate that the brief tory return to power (1710–14) would have offered a known Jacobite sympathizer (Hinnant, Anne Finch and Jacobitism); and the encouragement and support of her new literary friends, especially Swift and Pope (McGovern, Finch, Pope, and Swift).

Both Swift and Pope wrote poems praising Finch as a poet. Swift's 'Apollo Outwitted' humorously portrays her as inflicted with modesty by the lustful Apollo, whose advances she has rebuffed, and encourages her to overcome his curse and publish. And Pope, who counted the Finches among his friends and for whom Finch wrote three poems, addressed to her his 'Impromptu, to Lady Winchilsea' in which he heaps praises upon Ardelia as the greatest of all women poets. The sincerity of his high regard for her poetry is also evident in his having included eight of her poems in the miscellany Poems on Several Occasions that he edited in 1717.

Finch continued writing poetry until the time of her death at the age of fifty-nine. After months of deteriorating health she died on 5 August 1720, at her Cleveland Row home in London. She was buried, at her request, in the small church on the Eastwell estate, on 9 August. Lord Winchilsea survived her by six years.

For nearly two centuries following her death, Finch's poetry fell into oblivion. Her reputation in the nineteenth century rested almost entirely upon a remark in Wordsworth's 1815 supplementary essay to his preface to the Lyrical Ballads, in which he praises her 'Nocturnal Reverie' for its new images 'of external nature' (Prose Works of William Wordsworth, ed. W. Owen and J. Smyser, 1974, 3.73). With a few exceptions, Finch's poems are all collected in one of three manuscripts—an octavo and a folio, both dating from the 1690s and the source of the 1903 edition, The Poems of Anne, Countess of Winchilsea, and the Wellesley manuscript, containing her most mature work and compiled about the time of her death, though not published until 1998.