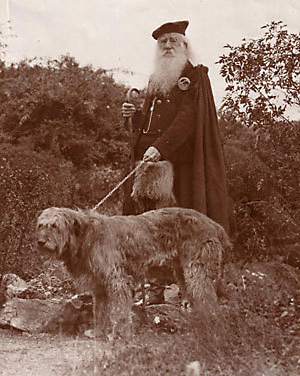 O'Mahony [formerly Mahony], Pierce Charles de Lacy (1850–1930), politician and philanthropist, was born in Dublin to a Church of Ireland family on 9 June 1850, the second surviving son of Peirce Kenifeck Mahony (1817–1850), a landlord and barrister, of Kilmorna, co. Kerry, and his wife, Jane (d. 1873), daughter of Robert Gun Cuninghame, deputy lieutenant for co. Wicklow, of Mount Kennedy, co. Wicklow. Shortly after Pierce's birth his father died; when he was six his mother married Colonel William Henry Vicars (d. 1869), and the family moved to Leamington in Warwickshire. The marriage provided Mahony with two half-siblings. Although Mahony claimed ancient lineage, his family's considerable affluence was due to the flourishing solicitor's practice of his grandfather Pierce Mahony (1792–1853). The latter had been a close associate and solicitor to Daniel O'Connell, standing successfully as a Liberal at Kinsale in the parliamentary election of 1837 but being unseated on petition.

After Rugby School, Mahony matriculated at Magdalen College, Oxford, in 1870 but did not take a degree. While at Oxford he formed an Irish home rule club; John Gordon Swift MacNeill, later one of the protestant members of the Irish Parliamentary Party, recalled their friendship at Oxford. He proceeded to the Royal Agricultural College, Cirencester, leaving in 1875 with the award of the Haygarth gold medal. His interest in agriculture later found practical and political outlets; also he was an enthusiastic botanist. On 24 April 1877 he married Helen Louise (d. 1899), daughter of Maurice Collis, a member of the Royal Irish Academy; they had two sons, Pierce Gun (1878–1914) and Dermot Gun (b. 1881).

In November 1881 Mahony was appointed assistant commissioner under the Irish Land Law Act of that year, resigning three years later in 1884. His experience as an assistant commissioner, in part, converted him into a supporter of the rising Irish Parliamentary Party and particularly its leader, Charles Stewart Parnell. He was rewarded with an unopposed return as the party's candidate for Meath North at the general election of 1886. Mahony belonged to the class of Irish Parliamentary Party MPs who could pay their own way and not place a burden on the party's coffers. However, he was not a silent back-bencher and from the outset played an active part in the affairs of the House of Commons, taking an interest in a range of topics, but most especially in land and constituency issues. Fittingly, his maiden parliamentary speech (24 August 1886) was on the land question. He additionally gave attention to standard nationalist nostrums such as the conduct of the police and the plight of political prisoners. He was a member of the Irish piers and roads commission and the board of guardians in Listowel, and was a royal commissioner of market rights and tolls. But for the Parnell divorce crisis of 1890–91 he would have been a long-serving and leading member of the party.

Mahony was one of the small group of Irish Parliamentary Party MPs who wrote to Parnell on 28 November 1890 urging him to retire. Subsequently Mahony threw in his lot with the minority who stood by Parnell, being one of the four protestant MPs who upheld Parnell's continued leadership during the party's deliberations in December 1890. For Mahony, who was distressed by the breach with Gladstone, 'Parnell was fighting for principle and not for self' (Callanan, 29). He was one of the few to defend publicly Parnell's marriage to Katharine O'Shea, saying they were now married 'according to the laws of the Church to which she and Mr Parnell belonged' (ibid., 127). Loyalty cost Mahony dearly at the general election of 1892 when Michael Davitt won Meath North as an anti-Parnellite. Mahony's election petition alleging undue clerical influence was successful, though Davitt's declaration of bankruptcy prevented Mahony from recovering the costs to which he was entitled. Mahony then narrowly lost the resulting by-election in February 1893. The costs of the petition bore heavily on his financial position. He was called to the Irish bar at King's Inns, Dublin, in 1898 and practised as a barrister. Defeated as a candidate for the St Stephen's Green division of Dublin as a Parnellite at a by-election in September 1895, for the Harbour division in Dublin in October 1915, and as Irish Parliamentary Party candidate against Sinn Féin for Wicklow West in 1918, he never resuscitated his parliamentary career. In 1900 Mahony's financial position was secured when he inherited the Grangecon estate in co. Wicklow from an uncle, David Mahony; he then abandoned legal practice. In 1901 he assumed the original family surname of O'Mahony and in 1912, on the death of his elder brother, assumed the style the O'Mahony of Kerry. A first cousin, Alice Jane (d. 1906), daughter of Lieutenant Colonel Francis William Johnstone, became his second wife on 17 December 1901.

O'Mahony's colourful life began a new phase in 1903 when he and Alice travelled to Sofia, Bulgaria, to undertake relief work among refugee orphans. Large numbers of refugees had fled to Bulgaria to escape Turkish massacres following the abortive uprisings in Macedonia and Thrace. On 30 March 1904 he opened St Patrick's orphanage, which continued functioning until closure during the war in 1915. He supervised and paid its costs, while also bringing at least four orphans to Ireland where he paid for their education. He seems to have lived in Bulgaria until 1909, and at some point became a member of the Bulgarian section of the Greek Orthodox church. In January 1915 he received the cross of the Civil Merit from King Ferdinand I for his work in Bulgaria. His last visit to Bulgaria was in 1915 when he tried unsuccessfully to avert its joining the central powers in the conflict. In the post-war settlement he argued for the exclusion of Bulgaria from the reparations imposed on the defeated powers.

Meanwhile O'Mahony remained active in Ireland's affairs. He appealed for unity at the national convention in 1907 held to consider the Irish Councils Bill and continued to speak for home rule. For a time his relations with John Redmond, a long-time ally, cooled as a consequence of the theft of the Irish crown jewels in 1907, which led to the dismissal of their custodian, Sir Arthur Vicars, who was O'Mahony's half-brother. O'Mahony believed that Vicars was made a scapegoat for the episode and that Redmond had been insufficiently supportive in the fight to vindicate him. In 1913 O'Mahony was married for a third time, to Grace (d. 1969), daughter of James Ledger Hill; they had a daughter. In 1913 he supported the workers during the Dublin lock-out, when a group of powerful employers spearheaded by William Martin Murphy sought to force employees to sign a pledge not to join the trade union led by James Larkin. During the First World War he aided Redmond, serving as a member of the Irish Recruiting Council. In 1920 he was made CBE for his work in promoting recruitment to the British armed forces during the First World War, but later in the year returned the award and also resigned as deputy lieutenant for Wicklow and from the magistracy of Kildare and Wicklow in protest against British policy in Ireland during the Anglo-Irish war.

From 1921 O'Mahony's son Dermot (who sat as a Cumann na nGaedheal member for co. Wicklow in the Irish Free State parliament, 1927–38) resided in the main house at the Grangecon estate. Pierce moved to a hunting lodge at Coolballintaggart, where he concentrated on his elaborate garden, bred Irish wolfhounds, and, as befitted an 'Irish chieftain', took to wearing an Irish saffron kilt and was accompanied by bagpipers. Although a member of the Orthodox church, he remained a communicant in the Church of Ireland until 1927 when a new rector refused him communion unless he renounced the Orthodox faith. Perhaps more from pique than conviction he became a Roman Catholic in 1929. He died at Coolballintaggart, co. Wicklow, on 31 October 1930.