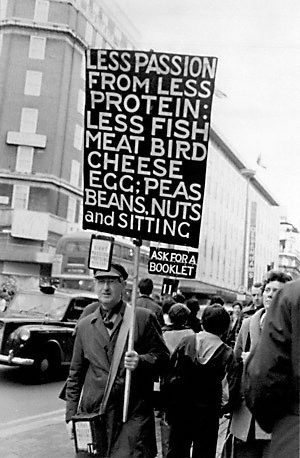 Green, Stanley Owen [known as Protein Man] (1915–1993), dietary reformer and author, was born on 22 February 1915 at Harringay, north London, the youngest of the four sons of Richard Green (d. 1966), a bottle-stopper maker's clerk, and his wife, May (d. 1967). He was educated at Wood Green School and may have worked as a clerk or draughtsman before joining the Royal Navy in August 1938. Following his demobilization in September 1945 Green undertook a series of jobs, beginning with the Fine Art Society, during which time (March 1946) he failed the entrance exam for London University. Thereafter he worked for Selfridges, the civil service (possibly at the Ministry of Works), and between 1956 and 1961 at Ealing borough council, where he was employed as a storeman and in the surveying and parks departments. In early 1962 he worked briefly for the General Post Office, after which he appears to have earned his living as a self-employed gardener. Throughout this period he lived with his parents until their deaths in the mid-1960s.

In later interviews and correspondence Green described himself as having 'always been a moral sort of person' who had been shocked during the war by the bawdiness or 'passion' of fellow sailors (Sunday Times Magazine). By about 1958 he claimed, through personal experience, to have equated this passion, in both men and women, with an excessive consumption of protein-rich foods (letter, 31 May 1981, Museum of London). The solution, which crystallized into a personal philosophy of ‘protein wisdom’, was a regime of moderation enshrined in the doctrine of 'less lust from less protein'. In June 1968 Green, aged fifty-three, began a public campaign of dietary and social reform among Saturday shoppers in south Harrow. After six months he dedicated himself full-time to the cause, which he now took to central London. Between 1969 and 1993 he became an almost daily sight for the office workers, shoppers, and tourists in and around Oxford Street. Saturday evenings were spent attempting to improve the habits of cinema-goers in Leicester Square.

Initially Green's principal means of communication was a board, carried above the crowd, on which he warned against passion and its eight key sources:

Central to his message was the need to moderate, rather than forgo, protein consumption. In childhood protein-rich foods were essential for growth and remained an important source for what Green termed the body's 'survival system'; however, adults required less protein, with the unnecessary excess being directed to the 'reproductive system' and so principally to sexual activity (Eight Passion Proteins with Care, 1968).

To the original eight 'passion proteins' Green later added sitting to warn of the link between sedentary living, enhanced protein build-up, and lust. But 'and sitting' was the only significant revision of the banner which he carried for twenty-five years and described in 1981 as 'the most important … part of my dedicated work'. This was supplemented by an 'oral message' which, as his diaries indicate, Green carefully refined to appeal to the passing crowd. On 12 November 1968, for example, he determined that 'my orals must be terse and printed for the 12 o clocks, and longer messages can be used when people are inclined to stand about; after lunching'. Later entries show Green's close observation of his effectiveness in new areas: 'People in the district behind Bayswater Road etc. are beginning to take notice of me' (diary, 16 June 1970, Museum of London). This publicity was furthered by the familiarity of Green's unchanging uniform of cap, overalls, satchel, and wire-rimmed glasses. During his campaign he was twice arrested, in 1980 and 1985, for public obstruction.

From the early 1970s Green began producing literature to distribute to passers-by. Two editions of his ‘protein wisdom’ pamphlet were printed commercially in 1973 after which he acquired a press and produced fifty revised editions from the front room of his council flat in Northolt, Middlesex. On average he sold twenty pamphlets on weekdays and up to fifty on Saturdays; by February 1993 he claimed to have sold 87,000 copies, always at the lowest possible price (for example, 11 pence in 1985). Green proved less successful with several fuller statements on ‘protein wisdom’ from which the shorter booklets derived. His novel, 'Behind the Veil: More than Just a Tale'—a colourful account of the danger of passion and the possibility of redemption—remains in manuscript, despite Green's best efforts with the country's leading publishing houses. A similar fate befell a 392 page version of 'Eight passion proteins' (rejected, among others, by Oxford University Press in October 1971), and a 67 page text, 'Passion and protein'. Unbowed by rejection, Green combined his street work with a letter-writing campaign which saw booklets sent to five British prime ministers (Ted Heath to John Major), numerous cabinet ministers, and MPs—especially those who spoke out on declining moral standards—as well as to the prince of Wales, the archbishop of Canterbury, the director-general of the BBC, the editor of The Times, the British Medical Association, the National Marriage Guidance Council, the newsagency W. H. Smith (who declined an offer to stock Green's work), the American government, and Pope Paul VI. An additional campaign during the early 1970s targeted British prison governors, who were urged to introduce dietary reform to reduce disturbances among inmates.

Green's interest in prison life demonstrates that the 'passions' he warned against took forms other than sexual activity. In his booklet Eight Passion Proteins with Care he argued that an excess of proteins left the elderly prone to corpulence, while mothers and fathers would suffer from bad temper and so deny 'our children, friendliness and conversation, compensating them, with dead things, like sweets and toys, merely pretending to be good parents'. None the less, sex remained Green's preoccupation as the principal manifestation of 'passion proteins'. Those consuming in excess would find it 'very hard to be well-behaved with a sexual friend, and to be headstrong in one's lonely bed, and difficult to keep to a responsible moral code, in the years before marriage'. Sexual intercourse, described by Green as 'married love', was to be the preserve of married couples and then only in moderation: 'Wives particularly, should not dress to seduce, all the time: single women never'.

Green's campaign for social reform was as remarkable for its durability and privations as it was for the idiosyncrasy of its message. Until qualifying for a free travel pass, he cycled twelve miles daily from Northolt to central London with his board and publications, a journey that took up to two hours in a headwind. On weekdays and Saturdays he campaigned until 6.30 p.m. and spent Saturday evenings in Leicester Square; Sundays were taken up with printing booklets for the following week. By 1985 he had reduced his visits to four days, but continued to make the journey three times a week until the age of seventy-eight. In line with his own teachings, Green limited his daily protein consumption to one egg and a concoction of milk powder and barley water. Otherwise he survived on oatmeal porridge, chopped dates, infusions of root vegetables, and home-made bread. In his dedication to the cause—together with his focus on the dangers of excess and indolence, and reform through self-regulation—Green is reminiscent of self-styled prophets of the seventeenth and eighteenth centuries. However, his motivation was less spiritual (Green was a declared agnostic) than philanthropic and civic. Hence ‘protein wisdom’ was developed to moderate the effects of excessive passion for the common good and to make 'better, kinder, happier people' (letter to the US government printing office, 1981, Museum of London). For Green his campaign was always 'a public service' (Sunday Times Magazine). Moreover, in its connection between diet, health, and social conduct, and on fathers' role in the raising of children, aspects of his message foreshadowed later mainstream commentators.

For some of his correspondents, Green's ‘protein wisdom’ offered a new direction; for others he was a charlatan or a potential menace, especially to young women. But to the majority he was tolerated and, over time, celebrated as an eccentricity of London street life. From the 1970s he gained wide publicity in the British and foreign press, acquired the nickname Protein Man, appeared on television and radio programmes, and featured as an 'Oxford Street character' on a tourist postcard. His principal message—'less passion, less protein'—was also used in a design range by the London fashion house Red or Dead, a move Green welcomed as a further opportunity to spread the word. Posthumously his printing press featured in an exhibition, ‘The Maybe’, at London's Serpentine Gallery in 1995. Stanley Owen Green died unmarried at his home, 34 Haydock Green, Northolt, Middlesex, on 4 December 1993. His message board, copies of his booklets, and other papers are now held by the Museum of London, with further artefacts at Gunnersbury Park Museum, London.