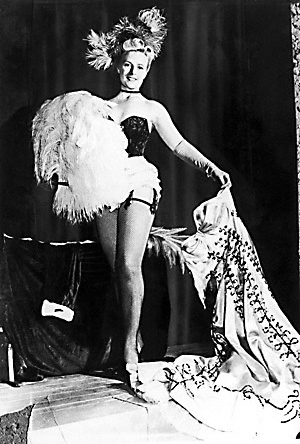 Dixey, Phyllis Selina (1914–1964), variety and striptease artiste, was born on 10 February 1914 at 330 Kingston Road, Merton, Surrey, the second child of Ernest Dixey (1891–1972), ship's steward and later railway attendant, from Sevenoaks, Kent, and his wife, (Phyllis) Selina (1891–1978), daughter of George Horsecroft, general labourer, of Kingston upon Thames, Surrey. It appears that her mother changed her name to Haycroft shortly before her marriage in July 1911; then employed as a dressmaker, Selina Dixey later worked at Fred Karno's Karsino on Tagg's Island in the Thames. Phyllis and her elder brother were educated at Fircroft Road primary school in Tooting before the family moved to Surbiton, Surrey. As a child Dixey took singing and dancing lessons paid for by her uncle, the textile manufacturer Nicoli (Nusli) Prestonji Whaddia (1879–1971), who had married her mother's sister and was known to Phyllis as Uncle Norman.

Dixey made her professional acting début aged fourteen. In 1929 she joined the chorus line of the theatre producer Wallace Russell Parnell (1894–1956) before moving on—under Parnell's supervision—to take leading roles in his stage tableaux. These comprised static ensembles of thinly veiled women who recreated scenes from classical art or adopted poses deemed of artistic merit, requirements then necessary to evade the censor. In July 1935 Dixey travelled to Australia with Parnell's Laughter Express, where she appeared on the Tivoli Theatre circuit, returning home in the following April when she was described on the ship's passenger lists as a ‘theatrical artiste’. She now rejoined the comedian Ernie Lotinga in his play The Means Test, in which she had previously performed, and also appeared in Lotinga's film Love up the Pole (1936). The ending of a relationship with Parnell was probably the motive for a failed suicide attempt in the same year. While in Australia Dixey had met the Irish-born comedian and musician John James (Jack) Tracy or Tracey (1897–1978), the son of John Tracey, a co. Wicklow lighthouse keeper, with whom she now began touring in a dual variety act. On 8 December 1938 they were married at Raynes Park register office, Merton. The couple, who had no children, lived at 10 Fairbourn Road, Brixton, and at Wentworth Court, Surbiton, before moving in the early 1940s to Strand Lodge, Epsom.

During the late 1930s Dixey and Tracy developed the stage routine that brought her fame and notoriety. In November 1939, at the Hull Tivioli Theatre, Dixey gave her first performance of Confessions of a Fan Dancer, a humorous interpretation of her earlier tableaux in which she removed her clothes behind the cover of feathered fans before revealing her nudity. Hers was not the first fan dance routine, the acrobatic dancer Denise Vane (Doreen Mason) having performed this in 1937, followed by a regular routine at London's Windmill Theatre from 1938. Initially Dixey's act caused little concern but in March 1940 a show in Sunderland was stopped by the police. This in turn prompted George Titman—in his capacity as theatrical censor in the lord chamberlain's office—to ban future performances on the grounds of public decency. However, Dixey's personal remonstration led to the lifting of the ban and, over the next two years, she and her husband toured nationally with the fan and striptease routines, including a show at the Phoenix Theatre, London (November 1941), for which Dixey purchased tickets for an audience of servicemen. Instances of her popularity in this period include two photographic collections, The Phyllis Dixon Album: the Goddess of Allure (1940?) and Phyllis in Censorland (1942), both by Horace Narbeth, and her depiction on the nose cone of a Lancaster bomber from 50 squadron (1944).

From July 1942 Dixey appeared at London's Whitehall Theatre in a series of popular revues, beginning with All's Fair (July 1942). In the following April, Tracy and Dixey leased the theatre to produce and star in Step out with Phyllis and Goodnight, Ladies! (March and December 1943), followed by Peek-a-Boo! and Peek-a-Boo Again! (May 1944 and July 1945). Billed as ‘England's popular pin-up girl’, Dixey also directed the Peek-a-Boo! revues, making her one of the first women to take on this role in the West End. Three shows were performed daily between 2 p.m. and 9 p.m. and comprised Tracy's comedy routine, conjuring, impersonations, and table tennis demonstrations, culminating in Dixey's striptease accompanied by her supporting dancers. In October 1944 Pathé News offered a day in the life of 'one of Britain's wartime stars'—beginning with Dixey's early morning outdoor bathe, and followed by supervision of new routines at the Whitehall Theatre, finale performance, and her evening return to surburban respectability. Commercially successful, Peek-a-Boo! was less appreciated by reviewers who wrote of songs 'unpleasantly suggestive' and jokes that were 'Stilton “blue”' and of 'the nudity of Miss Phyllis Dixey, the blue-eyed blond who brings a prim manner to the business of the “pin-up girl”' (The Times, 17 May 1944). Peek-a-Boo Again! fared no better as a show 'humourlessly built round the disrobing of Miss Phyllis Dixey, who treats her audience with the prim archness of a school-marm', while the revue's curious xylophone interlude 'outrages the devitalized atmosphere of the temple dedicated to the devotees of the Dixey cult' (The Times, 18 July 1945). In February 1944 the Conservative MP Edward Keeling questioned the war ministry's decision to take over the Scala Theatre (then hosting a Shakespeare season), urging the secretary of state 'if he has to requisition a theatre … [to] consider Phyllis Dixey rather than Shakespeare' (The Times, 23 Feb 1944).

In 1946 Dixey and Tracy moved from Epsom to 101 Albion Gate, Hyde Park Place, London, and in the following year Phyllis made a second film appearance in the thriller Dual Alibi, alongside Herbert Lom. The couple returned to touring with a version of the Peek-a-Boo! revue, produced by Tracy, with Dixey billed as 'the most talked about girl in England' (The Guardian, 18 June 1946). Acts who joined the show in this period included Morecambe and Wise, Michael Bentinck, and George Martin (Birmingham Hippodrome, 7 April 1952). Reactions to Dixey's performances remained mixed. To some her fan dance and dance of the seven veils, 'though daring' were 'scenes presented with a delicate subtlety of timing that prevents them from giving offence' (The Guardian, 26 Sept 1950). Others were sufficiently offended to bring charges for public indecency, and in June 1954 she was fined £5 by Scunthorpe magistrates.

After the war Phyllis Dixey also faced the challenge of rival troupes, some offering increasingly explicit shows, and the decline of the appeal of variety theatre. In 1949 she took her act to Scandinavia, repeating the tours until 1954 though with declining levels of success and financial return. Indeed, on the final tour the performers' return to England was possible only with a loan from the British consul in Oslo. In February 1957 she and Tracy were charged with failing to pay their performers during an earlier show and, though Dixey was cleared, her husband was fined for abandoning the cast (The Guardian, 15 March 1957). No longer able to stage her own revues, she appeared in summer 1956 in an early touring production by the future Soho impresario and publisher Paul Raymond, as The One and Only Phyllis Dixey. Now suffering ill health, she made only a few more appearances before her final show at the Palace Theatre, Burnley, on 19 April 1958. By the following February the couple faced bankruptcy. At the height of her career Dixey had earned £100 a week but in February 1959 she was reported to owe £1282 to the Inland Revenue with just £4 in assets. Now required to live with relatives near Billingshurst in Sussex, Dixey was eventually discharged from bankruptcy in October 1961. The couple's final employment was for James Molyneux on his dairy at Loseley Park, near Guildford, where Dixey cooked for the family. In November 1960 Phyllis moved, without her husband, to live at The Retreat, the home of her maternal uncle at 45 Downs Wood, Tattenham Corner, Epsom. Four months later she was diagnosed with breast cancer and, in the final months of her life, converted to Roman Catholicism.

Phyllis Dixey died at The Retreat, Tattenham Corner, on 2 June 1964 and was buried at Epsom cemetery. She was survived by her husband who, having found work as a golf course steward, remarried in 1966 and lived in Surbiton until his death on 11 October 1978. In the same month a television adaptation of her life, The One and Only Phyllis Dixey, was screened with Lesley-Anne Down in the title role. Dixey's grave was restored by the British Music Hall Society in 2005.