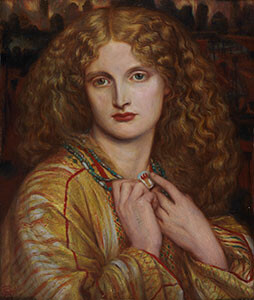 Miller [married name Thomson], Anne [Annie] (1834/5–1925), artist’s model, was born in Chelsea, London (though in later life she gave her birthplace as Oxford), the younger daughter of Henry Miller (b. 1780/81), an army pensioner, and his wife, whose name is not known, though she may have been the Mary Miller (b. 1797/8), charwoman, who was living in the household in 1841 (when Anne was aged six). After their mother’s death, Annie (as she was known by 1851) and her older sister Harriet were raised by their paternal uncle, Thomas Miller, a labourer, in the Chelsea area of London where veterans tended to cluster owing to its proximity to the Royal Military Hospital. The family was impoverished and unlettered, and it seems Annie received no formal schooling. In her teens she is thought to have been casually employed, minding children and serving beer in a district with many alehouses.

The young artist William Holman Hunt lived nearby in Prospect Place, Cheyne Walk, Chelsea, from 1850. A founder member of the Pre-Raphaelite Brotherhood, devoted to painting ‘from nature’ and from life, in 1853 he began work on his picture,The Awakening Conscience (1854, Tate Gallery), which shows a wealthy gentleman dallying with his companion, then known as a ‘kept woman’, maintained for sex outside marriage. Annie was employed to model for the woman, depicted at a moment of intense remorse.

It was a scene of art pre-empting life, for the artist regarded Annie Miller as a pretty working-class girl who, like the woman in his picture, would be easily seduced into an immoral life by offers of leisure and finery, a fate from which he proposed to rescue her. She may thus be described as having inspired the painting, which dramatized contemporary concerns about sexual behaviour. Early in 1854 Annie was installed in respectable lodgings at Hunt’s expense, to be educated and instructed in polite habits while Hunt was travelling overseas, with an implicit promise of marriage on his return. In succeeding months she earned some pin money as model to other artists, including John Everett Millais, George Boyce, and F. G. Stephens, who was charged with supervising Annie during Hunt’s absence.

The mixed reception of ‘The Awakening Conscience’ when exhibited at the Royal Academy in 1854 led Hunt to repaint the woman’s expression, and it is not considered a close likeness, although the facial features accord with Annie’s physiognomy. The theme of the ‘fallen woman’ and the double sexual standard that blamed the victim rather than the male seducer was a controversial topic, and the painting has retained its power to prompt analysis of Victorian moral codes.

After Hunt’s return to Britain in 1856, Annie Miller’s relationship with him continued amid some friction, as he criticized her for indolence and she remained uncertain about his intentions of marriage. Taking the opportunities for self-improvement, and rejecting his suggestions that she emigrate to Australia or earn her own living as a milliner, she transformed herself into a personable and refined young gentlewoman. In late 1859, ‘finding he could not get her to do what he wanted to make her a desirable wife’ (George Price Boyce, diary, 28 Dec 1859, in Bradbury, 2.1031), Hunt broke off the engagement and ended her maintenance. She approached other artists for modelling work; the results include a fine profile portrait by Dante Gabriel Rossetti, showing her luxuriant unbound hair (1860, National Museum Sweden), and the same artist’s figure study for Cassandra vainly warning the Trojans (1861, British Museum). Now addressed as ‘Miss Miller’, she had acquired the ladylike manners and fashion sense that are apparent in a single surviving photograph, in which she wears a full silk crinoline under a lace shawl, with her hair neatly dressed and netted.

By 1862 she had met Captain Thomas Ranelagh John George Thomson (1828–1916), an officer in the Royal East Middlesex Militia; he was the son of Thomas James Thomson of Windsor, Berkshire. Thomas Ranelagh Thomson was related to Thomas Heron Jones, seventh Viscount Ranelagh, a leader of the contemporary volunteer movement, to which Thomson’s regiment belonged. Introduced to him by Annie, Boyce and Millais described Thomson variously as ‘rather a swell’ (George Price Boyce, diary, 16 June 1862, in Bradbury, 2.1064) and ‘a good gentlemanly fellow’ (Holman-Hunt, 248). Shortly after meeting Thomson, she sat for Rossetti for ‘Helen of Troy’ (1863, Hamburg Kunsthalle). She and Thomson married on 23 July 1863 at St Pancras Church, London. In terms of prevailing social status, she thus achieved an ascent from the London slums to court circles, apparently outclassing Hunt. A daughter, Annie Helen Sturges Thomson, was born in October 1866, and a son, Thomas James Thomson, died within a month of birth in the following autumn of 1867.

The Thomsons lived firstly in Rosslyn Hill, Hampstead, next in Kensington, and later in Norfolk Square, Bognor Regis, where they were living when Thomas Ranelagh Thomson was declared bankrupt in August 1895. Annie Thomson was recorded as an active member of the Primrose League, a Conservative organization, in Bognor. They moved to Shoreham-on-Sea, Sussex, where her husband died in 1916. She died on 18 February 1925 at 6 Western Road, Shoreham-on-Sea, the home she shared with her daughter, who reported her mother’s age as eighty, though in reality she was nearer ninety.

Of the young female models associated with the artists of the Pre-Raphaelite movement, Annie Miller is the least recorded or known about. Her appearance, preserved in one photograph, a few portrait drawings, and a number of subject pictures for which she modelled, shows regular features, a slightly pointed nose, prominent chin, and a mass of blonde hair which could be crimped into fashionable cascades.