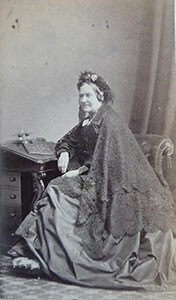 Treadwin [née Dobbs], Charlotte Elizabeth (1821–1890), lace manufacturer and dealer, was born on 7 May 1821 at Brompton Regis near Dulverton, Somerset, on Exmoor near the border with Devon, the second daughter of four daughters (there were also three sons) of James Dobbs (1797–1887), a farmer and later an irrigation and drainage engineer, and his wife, Joanna Terrell, née Shapland (1788–1870). She is believed to have taken up an apprenticeship with Mrs Passmore, a dressmaker and milliner at North Molton, Devon. Still a young woman, she may have run a lace school (a dame school where children were taught lace-making) in Woodbury, Devon, and by 1844 was in partnership with Ann Barns at 14 Bartholomew Street West, Exeter. Ann Barns went on to run the Regent Street, London, end of the business while Charlotte continued to trade in Exeter.

As Miss Dobbs, she was successful in business, with a showroom and manufactory in Cathedral Yard, Exeter, where in June 1848 she received an order from Queen Victoria for a lace handkerchief with the royal warrant as ‘manufacturer of Honiton Brussels Point Lace in Ordinary to Her Majesty’. On 28 January 1850, at the Gulliford Unitarian Chapel, Lympstone, Devon, she married John Treadwin (1820–1864), a clock- and watchmaker who had a shop in Exeter; he was the son of John Treadwin, a bookseller, and his wife, Mary. They had no children.

In the second half of the nineteenth century, when the business established by Mrs Treadwin (as she was generally known) flourished, Exeter was promoted as an ideal place from which to make excursions to the Devon coast and countryside. Guidebooks suggested tours of the surrounding country, pointing out villages where lace makers could be seen at work and lace purchased as a souvenir of their visit. Far from the image of the elderly villager working alone at her pillow outside a picturesque cottage, however, Charlotte Treadwin had a background in fashion and not a little ambition. She took great care over the designs executed by her workers (many of whom she had trained) to the extent of employing an artist to draw them. She did much to improve design and the reputation of Devon lace, which she considered essential to protect the industry in a period when rising demand led to the production of cheaper, inferior quality lace.

Bone lace (otherwise known as bobbin lace) was made in both Devon and Somerset from the late sixteenth century onwards, and employed large numbers in Honiton, East Devon, a coaching town, which gave its name to Honiton lace. By the early nineteenth century Honiton lace had evolved to include clothworks, raised work, and a wide range of decorative filling stitches known as leadworks. The lace was made on a rounded, straw-stuffed pillow by following a pricking (pattern). The lace maker grew the piece by weaving threads wound onto wooden bobbins around pins stuck into the outlines of the pricking. By the 1830s linen thread was replaced with cotton, often imported from America. Early examples included a hand-made net ground, but with the introduction of two twist bobbinet, a machine-made net, pioneered by John Heathcoat at Loughborough and Tiverton (from 1809 onwards), pillow-made motifs were stitched onto a machine-made ground. As well as this appliqué technique, Honiton guipure was made, where motifs were linked with hand-made ‘brides’ or bars. Treadwin’s ‘manufactory’ produced both pillow-made and needle-made lace, the latter often in imitation of antique laces.

At the Great Exhibition in 1851 Mrs Treadwin exhibited a Devonshire (or Honiton) lace flounce, made by thirty lace workers over several months, to a design produced by C. P. Slocombe, a student at the Government School of Design at Somerset House, London. She was awarded a bronze medal for the piece. Her work was praised as ‘equal to any foreign productions, and fully sustains Mrs Treadwin’s character as a manufacturer’ (‘Exhibition fancy and needle-work’, The Family Friend, 5, 1851). Seven Honiton lace manufacturers exhibited at the Great Exhibition in 1851, which has been taken as evidence of a mid-century boom for lace made in east Devon following the production of Queen Victoria’s wedding lace about 1838–40. Treadwin herself dated the revival of the manufacture to the queen’s order, which made the lace an object of fashionable demand. Treadwin’s prize at the Great Exhibition was followed by medals at the exhibitions of the Royal Cornwall Polytechnic Society in 1852 and 1875, and the universal exhibitions in Paris in 1855 and 1867, the latter for a half shawl made by twenty employees and designed by a student at the Nottingham School of Design.

Treadwin was concerned that lace makers were not trained to draw or design, and that lace designing was not much understood at schools of art. To encourage a greater understanding of the needs of the industry, she and her husband established a connection to the Exeter School of Art as benefactors to the fledgling institution in 1854. After the school moved to new premises at the Royal Albert Memorial Museum in Exeter in 1868, she donated a lace collection for study, and also donated sixteen pieces of lace to the South Kensington Museum. She regularly registered her lace designs which she sometimes referred to as ‘Exeter lace’, including ‘Fleurette’, and also published patterns in periodicals for women readers. She moved to producing copies of the best foreign laces, and also reproductions of historic laces from the seventeenth and eighteenth centuries. Repair and restoration of antique laces became a major part of the business. In 1873 she published a manual of patterns and techniques, Antique Point and Honiton Lace (1873). Her reputation was enhanced by the regular commissions that she received from Queen Victoria and other members of the royal family. Latterly, on the occasion of royal marriages, these included orders from Victoria for reproductions of antique point, in 1875, and in 1881 and 1885. It was a measure of her success, and her passion for the industry, that she was invited to lecture on the subject at the Devon and Exeter Institution in 1883.

As an astute businesswoman, Charlotte Treadwin imported millinery as well as promoting locally made work at a time when lace was an important element of élite fashion. Her husband joined her in the business, as did one of her sisters; another sister, Harriett Woodruff, had a successful lace business in Leamington Spa, Warwickshire. Treadwin ran her manufactory on modern lines, compared to the traditional rural system of outworkers and middlemen, maintaining quality by constant supervision and by producing standard pieces which her lacemakers worked to. In May and again in June 1887 she was visited and interviewed by Alan Cole, a commissioner from the South Kensington Museum, as part of his inquiry into the state and prospects of the Honiton lace industry, which was then in decline. She feared that the industry was ‘dying and doomed’ (Honiton Lace Industry, 6) unless some means could be found to train a new generation of skilled workers capable of producing the fine products on which its future depended. Those skills had formerly been taught in the lace schools, which had since been displaced by elementary schools. She told Cole that ‘a well-made lace from a good design can always sell at a good price’, and he noted her that she paid her workers in cash, rather than in tokens and groceries. ‘She pays a fair rate of wages … youngest … 5s and 6s a week, whilst the best workers may earn from 2s to 2s 6d a day’ (ibid. 2, 8).

Charlotte Treadwin died at her home, in Cathedral Yard, Exeter, Devon, on 6 December 1890, five days after being paralysed by a stroke, and was buried in the Higher cemetery, Exeter. Her will made bequests to Exeter charities, including the Devon and Exeter Female Penitentiary and the West of England Blind Institute, and she left her prize medals to the Royal Albert Memorial Museum. She was evidently well regarded, being described as ‘a woman of culture and taste who had the best interests of the trade at heart’ (Snell, Memorials, 249). The business passed to her assistant, Ellen Herbert, who continued to make, sell, and restore lace on the premises in Cathedral Yard until her death in 1929.

Charlotte Treadwin was one of Devon’s most important lace manufacturers. Her legacy was not only her skilled work and achievements as a lace maker, designer, teacher, and author, but also a historian and collector of lace. In addition to the samples that she originally donated to the fledgling Royal Albert Memorial Museum, an album of English and continental lace samples bequeathed in 1929 to the museum by Ellen Herbert is notable for the pieces designed and made by Treadwin, some of which were experimental.