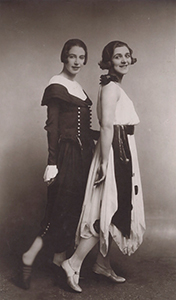 Norah Blaney was born at 30 Godolphin Road, Shepherd’s Bush, London, on 16 July 1893, and was baptized at St Thomas Roman Catholic Church, Fulham, the only child of Walter Henry Cordwell (1864–1952), a bassoonist and founding principal in 1905 of the New Symphony Orchestra, and his wife Mary Jane (Molly), née Thatcher (1866–1962). In October 1906, at the age of thirteen, Norah Cordwell won the Erard pianoforte scholarship to the Royal Academy of Music where she studied under Oscar Beringer. Four years later she won a foundation scholarship to the Royal College of Music where Sir Charles Stanford taught her composition and she won the Challen gold medal, Hopkinson silver medal, and the Dannreuther prize for piano playing. She took the name Blaney from her maternal grandmother, using it as a stage name from 1910. On 10 October 1914, at the Thanet register office, she married Albert Charles Lyne (1889–1918), a pianist; he was the son of Edward William Lyne, mechanical engineer. She remained independent of her husband, who died in France on 31 October 1918 from wounds sustained in action while a private in the London Scottish regiment.

By 1917 Blaney had already proved her versatility as a pianist, singer, monologuist, and composer. She had appeared in concert parties and pantomimes throughout England, played concertos under the baton of Sir Dan Godfrey with the Bournemouth Symphony Orchestra, and published her own song compositions including ‘Are You There Mr Bear?’ as well as piano settings of poems by Robert Louis Stevenson.

Gwendoline Farrar was born at 108 Park Street, London, on 14 July 1897, the third daughter of Sir George Herbert Farrar (1859–1915), politician and mining magnate, and his wife Ella, née Waylen (1869–1922). She briefly attended Heathfield School before training as a classical cellist under Herbert Walenn, and received her LRAM in 1917. Her sisters were presented at court but Gwen refused to conform, telling her mother that if she were forced to appear, she would walk up to the dais like Charlie Chaplin or do a headstand.

Blaney and Farrar were included as individual classical artists in Lena Ashwell’s touring parties in France, but came together to entertain the troops in a more light-hearted fashion, duetting in ragtime style in July 1917. Their act caught on and they appeared at the first of the regular royal variety performances at the London Hippodrome in November 1921. They were described as ‘the premier British double turn at the piano’ (Sunday Post, 6 Nov 1921), and in the 1920s became household names, touring throughout the UK alongside such acts as Vesta Tilley, the Ballets Russes, and George Robey. Farrar was ‘an eccentric, deep-voiced, a really funny comedienne with a turn for doing the unexpected such as suddenly playing the cello with perfect artistry’ (MacQueen-Pope, 112). Blaney, who was often thought of as simply the lively accompanist of Farrar, emerged as both a singer and dancer on her own account, and as a composer, arranging much of the music for their revues.

About November 1917 Farrar and Blaney set up home at 217 King’s Road, Chelsea, a beautiful Queen Anne townhouse, entertaining, among many others, the prince of Wales, Anthony Eden, Lloyd George, Noël Coward, Ivor Novello, Tallulah Bankhead, Radclyffe Hall, and Djuna Barnes. Their next-door neighbour, Ellen Terry, helped their careers, recommending to her public ‘that uncommon pair of entertainers Miss Norah Blaney and Miss Gwen Farrar’ and calling them ‘her protégées’ (Western Daily Press, 12 March 1921). The songwriters Robert Weston and Bert Lee wrote topical songs for them which they recorded for the HMV label, including ‘Shall I Have it Bobbed or Shingled?’ and ‘Percy’s Posh Plus Fours are Priceless’. Blaney married, in a Roman Catholic ceremony in Cheyne Row, on 7 September 1922, Philip Barron Bruce Durham (1899–1959), manager of the Midnight Follies; he was the son of William Campbell Durham, stockbroker. There were no children and the marriage was of little significance to her life or career, though she supported Durham financially.

Blaney and Farrar performed in André Charlot’s West End revues at the Vaudeville Theatre, Pot Luck (1922), Rats! (1923), and Yes! (1923), and were the stars of the long-running satirical revue The Punch Bowl (1924–5) at the Duke of York’s Theatre. The young Daphne Du Maurier sent Farrar fan mail in 1924. Radclyffe Hall went three times to The Punch Bowl, entertained Farrar at home, and invited her to join her and her partner Una, Lady Troubridge, to help celebrate her forty-fourth birthday. Pamela Travers, working as a journalist before becoming famous as the author of Mary Poppins, wrote a detailed profile of Farrar, saying of the double act, ‘The house rose at their turn, demanded more and more, would not let them leave the platform … Now they are head liners on every bill in which they appear’ (South African Pictorial, 21 Feb 1925). The motor-boat racing champion Joe Carstairs named her high-speed vessel (in which she won the Duke of York’s trophy) Newg after Gwen (Newg being ‘Gwen’ backwards). John Logie Baird chose Gwen, for her distinctive looks (horn-rimmed spectacles and large cowlick wisp of black hair showing up against her pale skin on her expressive face), for an early demonstration of a television broadcast in 1928, noting in his autobiography that the prince of Wales ‘looked at the little flickering image and recognized Miss Farrar’ (Baird, 86).

In 1925 Florenz Ziegfeld took Blaney and Farrar to the United States where they were hailed as ‘England’s Greatest Entertainers’. They appeared on Broadway in Louis XIV (1925) and in Palm Beach, Florida, in a lavish production, Ziegfeld Nights (1925–6). As well as topical comedy numbers, they sang the popular love songs of the day to each other and enjoyed a romantic partnership offstage as well as on. They recorded over 300 songs together and individually, including ‘Ukelele Lady’, ‘The Moon is Low’, ‘We’ll Cling Together’, ‘Runnin’ Wild’, and ‘It Ain’t Gonna Rain No More’.

In 1926 Farrar took the decision to leave Blaney in America, breaking up their partnership. They became professional rivals for several years. Farrar found a highly capable new accompanist in the pianist and composer Billy Mayerl. She encouraged him to sing and they became a very popular double act, touring all over the UK and making dozens of radio broadcasts and records for the Columbia label. Blaney meanwhile returned to England where she performed solo and starred in a long-running production of Rudolph Friml’s The Vagabond King (1927–8) in the West End. She then took over from Gertrude Lawrence in Irving Berlin’s musical Oh Kay! (1929), and appeared in Leeds as principal boy, Colin, in Mother Goose for the producer Francis Laidler (‘King of Pantomime’).

In 1930 Tallulah Bankhead was instrumental in arranging a reconciliation, both personal and professional, between Blaney and Farrar. They resumed their relationship offstage and on, appearing in The House That Jack Built (1930) with Cicely Courtneidge and Jack Hulbert and then Wonder Bar (1930–31) with Carl Brisson at the Savoy Theatre and on tour. Soon after the opening of Wonder Bar Blaney was obliged to return to Yorkshire where she had contracted with Laidler to perform a second season in pantomime. She became ill and her life was saved by a surgeon, Basil Hughes, who asked her to marry him. Blaney and Farrar gave a farewell performance at the London Palladium on 13 February 1932.

On 20 February 1932, in London, Norah Blaney, who had divorced Philip Durham in June 1931, married Basil Hughes (1878–1953), who was also divorced; he was the son of John Edward Hughes, vicar of Cheswardine, Shropshire. She retired from the stage to live near Bradford, Yorkshire, where she stood for election as a local Conservative councillor, but continued her friendship with Farrar. The pair made occasional radio broadcasts and, in 1935, a record for HMV at their Abbey Road studios.

Farrar devised a modern revue with a largely female cast, After Dinner (1932). Later she acted in three British feature films, She Shall Have Music (1935), Take a Chance (1936), and Beloved Imposter (1936). In 1934 Gallaher featured her in a series of cigarette cards, Champions of Screen and Stage, which included, among others, Greta Garbo, Katharine Hepburn, Clark Gable, and Marlene Dietrich. Between 1934 and 1938 she rented Grove Paddock in Effingham, Surrey, but retained the home on the King’s Road, Chelsea. Gwen Farrar died of a stroke at St Mary’s Hospital, Paddington, London, on 25 December 1944 and was cremated at Golders Green crematorium. The painter Augustus John wrote, ‘She was the up-rooted one, the changeling … the play-girl of the moon, the proud pilgarlic, perverse and adorable being’ (John, 382).

After Farrar’s death Blaney made no more broadcasts or public appearances for a decade. She and her husband moved to Par in Cornwall where they ran a farm and Norah directed shows for the St Austell Players. After Basil Hughes died in 1953 Blaney worked hard to revive her career. In 1960 her old friend Noël Coward cast her in his play, Waiting in the Wings (1960), which enjoyed a West End run and UK tour directed by Margaret Webster. Dame Sibyl Thorndike was also in the cast and she and Blaney performed piano duets together on BBC radio. Blaney was a member of the Royal Shakespeare Company in their 1961 Stratford season alongside Sir Ian Richardson and a young Judi Dench and Diana Rigg. By contrast she appeared in comedian Benny Hill’s first film, Who Done It? (1956), and in the television soap opera Crossroads (1966) as well as the prison drama Within These Walls (1976). When the BBC dramatized Rumer Godden’s children’s novel Kizzy in 1976, she appeared in several episodes with Miriam Margolyes. In 1981 Blaney became an honorary member of the Royal College of Music in a ceremony conducted by Queen Elizabeth, the queen mother, who remembered seeing her often on stage in her heyday with Gwen Farrar. Norah Blaney died in the Actors’ Retirement Home, Denville Hall, Northwood, London, on 7 December 1983. After a requiem mass at St Matthew’s Church, Northwood, she was cremated at the Breakspear crematorium, Ruislip.

Because of the ephemeral, topical nature of the material the Blaney and Farrar act has not endured long in cultural memory. However theirs was a remarkable and unique partnership, the first great English female musical comedy double act. In singing the popular love songs of their day, to each other, Gwen and Norah barely disguised the truth of their lesbian relationship in a manner that was ahead of its time. ‘Their appearance together provided as faithful a replication of a heterosexual dyad as their audiences would accept from a same sex couple’ (Lobenthal, 75).