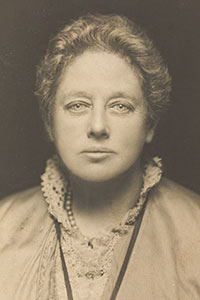 Having inherited significant wealth from his grandfather, Samuel Lees should have been able to provide his daughter with a comfortable upbringing. However, Edith experienced a difficult childhood, characterized by a turbulent and hostile relationship with both her father and stepmother, exacerbated by her father’s poor financial decisions. She felt both materially and emotionally deprived. She was educated at a convent school, but when she expressed an attraction to Catholicism her father hastily sent her to a more progressive school in London. She was a governess for a brief spell, and at the age of twenty-one, when she inherited £100, she decided to start her own school, moving south to Sydenham. A combination of debt and poor health prompted a breakdown within a few years.

While recovering, Lees moved in with her friend Honor Brooke, falling under the care and influence of the latter’s father, the Christian socialist Stopford Brooke. She began to encounter some of the significant progressive thinkers of the period, active in artistic and cultural fields as well as politics. While engaged in social work in the East End of London under Brooke’s guidance, she became disillusioned with the limitations of philanthropy and the way it maintained class hierarchies. She was eager to pursue both more radical ways of individual living and possibilities for social change.

As a result, in 1887 Edith Lees joined the Fellowship of the New Life, founded earlier in the decade by Thomas Davidson. She was soon serving as secretary, a role she briefly shared with the future prime minister Ramsay MacDonald. This group had already undergone a split, with members who wanted to concentrate on planning for the future through social reform going on to found the Fabian Society. Those who remained had a more immediate focus and wanted to cultivate the conditions in which individuals could flourish through interdependence and co-operation, ensuring that socialism encouraged, rather than eradicated, individuality. Their journal Seed-Time contains some of Lees’s earliest published works, such as ‘Woman and the New Life’ (no. 3, 1890).

One of the fellowship’s best-known initiatives was an experiment in ethical and communal living at Fellowship House, 29 Doughty Street, London. Edith Lees was a driving force in this effort. However, her 1908 work Attainment satirized their efforts, especially the middle-class men who relied on but did not acknowledge the invisible female labour needed to keep the house in order. The novel wryly concludes that ‘fellowship is hell’. However, she remained a great admirer of, and close friends with, key thinkers and participants in the fellowship, notably Edward Carpenter.

Edith Lees spoke on issues relating to class and workers’ rights to groups like the Ancoats Brotherhood and at places such as William Morris’s Kelmscott House. Her socialist ideals always reflected her acute awareness of the particularities of women’s lives. Unlike many of her fellow idealists who focused on the industrial working class, she was especially interested in the challenges faced by domestic servants. Her own servant, Ellen Taylor, was invited to join the fellowship as a gesture towards the dismantling of class hierarchies, but, as Attainment indicates, this was not a success. Like her friend Olive Schreiner, Lees was one of the ‘New Women’ of this period who were challenging ideas about women’s roles and responsibilities. She emphasized the need for women to reject conventional domesticity and femininity and embrace independence, especially economically. This combination of idealism and feminism meant that she was drawn to eugenic thinking, which emphasized the possibilities for individual, racial, and social perfection. Her interest was not in eliminating those thought to be ‘unfit’, but rather in tackling the root causes of poverty and suffering through science, rationality, and education.

Edith Lees was already aware of the early work of (Henry) Havelock Ellis (1859–1939), but instinctively disliked him when they initially met through the Fellowship of the New Life. However, a chance encounter in Lamorna, Cornwall, in August 1890 gave them the opportunity to explore their mutual beliefs, interests, and values, and they gained a greater respect for one another. This eventually developed into love, though never erotic desire. Alarmed by the experience of their friend Eleanor Marx, they decided not to embark on a free union. Their marriage nevertheless reflected their commitment to rejecting conventionality in favour of preserving their own individual identities and independence. The Ellises spent the night before their wedding, which took place at Paddington register office on 19 December 1891, preparing the proofs for Edith’s first published pamphlet, The Masses and the Classes: a Plea.

On return from honeymoon Edith Ellis initially returned to living at Fellowship House and by mutual consent she and Havelock frequently lived apart, occupied independent spaces within one another’s homes, and underwent long separations. This suited their temperaments, as she was naturally gregarious and sociable whereas he craved solitude. In A Noviciate for Marriage (privately printed, 1894) she argued for the importance of trial marriages, later developing a concept of what she called in an essay ‘semi-detached marriage’ (posthumously published in The New Horizon in Love and Life (1921)). The earliest years of their marriage were divided between Cornwall and London, and Edith spent much of her time farming and renovating houses. She moved frequently throughout her life, often spontaneously and sometimes disastrously, but maintained a particular fondness for Cornwall.

In his autobiography Havelock Ellis claimed that it was only after their marriage that Edith confessed to him that she had been involved in a romantic relationship with a former childhood friend named Claire. It seems likely, however, that her love and desire for women was already known to him. Her revelation gave him licence to pursue his own intimate affairs with women and the pair reached a new accommodation and understanding which endured for many years. Her most significant relationship was with an artist named Lily Kirkpatrick at the turn of the century. While their relationship had ended by the time of Lily’s death from Bright’s disease in 1902, this loss had a lasting effect on Edith Ellis who attempted to maintain contact with Lily through spiritualism. Her 1912 publication The Lover’s Calendar is a collection of poetry for each day which traces the course of a relationship and is a tribute to Lily. She had a number of long-standing and important relationships with other, unnamed, women.

Havelock Ellis’s observation and interpretation of his wife’s feelings for, and relationships with, other women were crucial influences on his theories of sexuality in general and homosexuality in particular. Scholars generally agree that she appears as a case study—‘Miss H’—in Sexual Inversion which became the first controversial volume of the landmark work in sexology, Studies in the Psychology of Sex. Havelock Ellis saw homosexuality as an essential, biological category, and as such emphasized the importance of tolerance and acceptance towards homosexuality.

Although Edith Ellis shared some of his thinking, and used his language of ‘inversion’ and ‘abnormality’, her ideas differed in important respects. They were also shaped by her own long-standing interest in eugenics and belief in the important role that individuals could play in furthering social change. Drawing on contemporary avant-garde ideas about the significance of genius, she argued that ‘inverts’ might play a critical role in advancing and perfecting society through creativity and artistic output. She termed this ‘spiritual parenthood’, even going so far as to call ‘inverts’ potential ‘reedemers of the race’—in ‘Eugenic and Spiritual Parenthood’ which was first delivered as a lecture and published posthumously (E. Ellis, 63). Nevertheless, she did not directly discuss her own sexuality in public.

Edith Ellis’s ideas on socialism, class, feminism, eugenics, and sexuality were worked out in her fiction as well as expounded in her lectures and political writing. Her first novel, Seaweed, initially came out in 1898 but became entangled in the legal furore surrounding Sexual Inversion, was suppressed, and eventually republished as Kit’s Woman in 1907. Her short stories, which often explore issues around class and gender, were initially published by Fred Pethick-Lawrence in The Echo and collected in My Cornish Neighbours in 1906. She rewrote one, Kezia, into a successful short play. Another, The Idealist, has been read as an exploration of her views on homosexuality. Her 1910 publication, Three Modern Seers, analysed three of her foremost intellectual and political influences, Frederick Nietzsche, James Hinton, and Edward Carpenter. Other works include the 1911 collection, The Imperishable Wing, the 1914 novel, Love-Acre, and the 1915 collection of three plays, Love in Danger. She also wrote regularly for newspapers and journals. She was an active member of the literary and artistic community of women centred on the Lyceum Club. The relationships she forged here—together with a posthumous suggestion from Lily, brokered through a medium—prompted her into several successful public speaking tours in the United States in 1914 and 1915, during which she met well-known social reformers such as Jane Addams.

Edith Ellis had long suffered from poor physical and mental health, and both deteriorated significantly in her later years. She was also suffering from diabetes, which was then untreatable. Her vulnerability meant that she felt increasingly threatened by the relationship between her husband and the American birth control activist Margaret Sanger. She made a suicide attempt immediately upon returning to Britain in May 1915, and her husband encouraged her to enter a nursing home. According to Havelock Ellis, she then became concerned that he might commit her to an asylum, and initiated a legal separation. She died soon afterwards, of diabetes and pneumonia, at their home in 28 Sandringham Court, Maida Vale, London, on 14 September 1916, and was cremated at Golders Green crematorium. She had asked that Edward Carpenter speak at her funeral but he was too ill to attend. Further work on James Hinton and a collection of her most significant essays, The New Horizon in Love and Life, was published posthumously in 1921, together with memorial reflections by a number of her associates.

Rather than occupying a central place in a particular political or social movement, Edith Ellis’s interests crossed the boundaries of modernism, feminism, socialism, and sexology. As a consequence her contribution to the theory and practice of these developments has often been overlooked—not least because of her gender—and she is more often known through her relationships to others. She also left very little private and unpublished material, often immediately burning letters, and so much of what can be known about her life and views must be derived from her printed works or gathered from the recollections of her friends. The major source for Edith’s early life is her husband’s apparently candid but undoubtedly selective autobiography. Nevertheless, she was an important intellectual, artist, and activist in her own right. Recent interest in lesbian histories and pioneers has brought renewed attention to her life at the same time as scholars have been reassessing her critical legacy and work. Her writing helped to expand and define the possibilities for progressive women at the fin de siècle. Her argument that homosexuality should not be merely accepted or tolerated but could be positively celebrated was particularly radical.