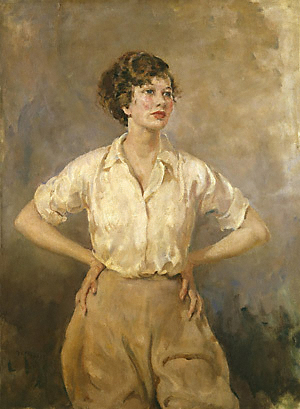 Hiller, Dame Wendy Margaret (1912–2003), actress, was born at Heathwaite, Bramhall Lane, Hazel Grove-cum-Bramhall, Cheshire, on 15 August 1912, the only daughter among the four children of Frank Watkin Hiller, a manager at a cotton mill, and his wife, Mary Elizabeth (Marie), née Stone. She was sent away to school, to Winceby House in Bexhill, Sussex, her father having decided that she stood no chance of marrying unless she lost her Lancashire accent.

Hiller had longed to be an actress from childhood and at eighteen joined the Manchester Repertory Theatre as a student. She was happy just to be there, whether it meant making the tea, sweeping the stage, understudying, or playing small parts. She made her début as the maid in George Pleydell Bancroft's The Ware Case in September 1930, and in 1931 became an assistant stage manager. After four years' service she was sacked and left the company. But when the theatre produced Love on the Dole, adapted from Walter Greenwood's novel by Ronald Gow (1897–1993), the leading role of Sally Hardcastle needed an actress with an authentic Lancastrian accent, and they remembered the girl they had just fired. Hiller was recalled and after a long northern tour Love on the Dole reached the Garrick Theatre, London, in 1935, and the Shubert Theater, New York, in 1936. James Agate thought her 'magnificent … the play moved me terribly and must move anybody who still has about him that old-fashioned thing—a heart' (The Guardian, 16 May 2003). It made Hiller's reputation, and brought her to the attention of George Bernard Shaw, who invited her to the Malvern festival in 1936, in a season celebrating his eightieth birthday. With only six rehearsals for each show, she played Eliza Doolittle in Pygmalion, and the title role in Saint Joan. 'I thought Shaw asked all young actresses to do those parts', said Hiller, 'It never occurred to me he thought I was something special' (Evening Standard, 25 June 1992).

After the success of Love on the Dole both Ronald Gow and Hiller excited the interest of the film studios, and in 1937 she made her film début in Lancashire Luck, a 'quota quickie' written by Gow, whom she married on 25 February that year. He was the son of Anthony Hepburn Murray Gow, a bank manager. He had trained as a chemist and for some years was a teacher at his old school, Altrincham grammar. Writing occupied his spare time and during the 1910s and 1920s he made several short educational films. His first success as a playwright came in 1933 with Gallows Glorious, a play about the American slavery abolitionist John Brown. Theirs was a famously happy marriage. They had two children, Anthony and Ann, and lived for many years in Beaconsfield, Buckinghamshire. Hiller (who continued to appear under her maiden name after her marriage) was fiercely private, and was determined that her career would interfere as little as possible with their domestic life.

Hiller was primarily a stage actress, making relatively few films during a fifty-year career, but she left an indelible impression in many of them, starting with the enormous success of her second feature film. Shaw adored her, and had been delighted with her performances at Malvern. He insisted that she play Eliza in the film version of Pygmalion (1938), predicting she would be 'the film sensation of the next five years' (Holroyd, 390). Leslie Howard was Henry Higgins, the film was directed expertly by Anthony Asquith, and Hiller was nominated for an Oscar. A projected film of Saint Joan fell through, but Hiller's success as Eliza and her desire to play Barbara Undershaft led to Shaw himself investing £20,000 in the film of Major Barbara (1941). The director was the inexperienced and temperamental expatriate Hungarian Gabriel Pascal, who had produced Pygmalion. Major Barbara was filmed at the height of the blitz, and between air raids the film was shot by the then untried David Lean, and by Harold French, who rehearsed the actors. Cuts demanded by the distributors left the film with much of the play's religious irreverence and social criticism weakened. 'I saw the finished film once only—I wept with disappointment', wrote Hiller (ibid., 437). Her only other film in the 1940s was Michael Powell and Emeric Pressburger's charming Scottish love story, I Know Where I'm Going! (1945), in which she gave a radiant performance as the headstrong heroine who discovers that love is more important than money.

Hiller returned to the theatre in 1943, touring wartime factories as Viola in Twelfth Night, and to the West End in 1944 as Sister Joanna in John Gielgud's revival of Cradle Song by Gregorio Martinez Sierra. Gielgud later described her as 'modest to a fault, punctual, reliable, deeply professional [and] loyal' (The Independent, 9 Aug 1992). She then played Princess Charlotte to Robert Morley's Prince Regent in Norman Ginsbury's The First Gentleman at the New Theatre in 1945; and at the Bristol Old Vic in 1946 she was Portia in The Merchant of Venice and Pegeen Mike in The Playboy of the Western World. She had a huge success in her husband's adaptation of Thomas Hardy's Tess of the d'Urbervilles (1946), which transferred to London, although their later collaboration on H. G. Wells's Ann Veronica (1949) was less successful. She had returned to New York in 1947 as Catherine Sloper in The Heiress (Ruth and Augustus Goetz's adaptation of Henry James's Washington Square), appearing alongside Basil Rathbone, and succeeded Peggy Ashcroft in the role in London in 1950. She then accepted a supporting role in Norman Hunter's self-consciously Chekhovian Waters of the Moon (1951) for the opportunity of working with Edith Evans and Sybil Thorndike.

Hiller was never aligned to any of the major classical theatre companies, and perhaps the idiosyncrasies of her vocal delivery, sometimes over-emphatic and disjointed, prevented her from scaling the heights in Shakespeare. Her Shakespearian performances were rare, but she joined the Old Vic Company for the 1955–6 season, playing Portia in Julius Caesar, Mistress Page, a vapid piano-playing Helen of Troy in Tyrone Guthrie's Edwardian Troilus and Cressida, an outstanding Emilia to the alternating Othello and Iago of Richard Burton and John Neville, and a moving Hermione in The Winter's Tale.

On Broadway in 1957 Hiller was nominated for a Tony award for her Josie Hogan in Eugene O'Neill's A Moon for the Misbegotten, and in London the following year she succeeded Celia Johnson as Isobel Cherry in Robert Bolt's West End début, Flowering Cherry, repeating the role in New York in 1959. In the early 1960s she appeared in two more adaptations from Henry James, as Miss Tina in The Aspern Papers (1962) in New York and as Susan Shepherd in The Wings of the Dove (1963) in London.

Hiller had returned to the screen as Mrs Almayer, the drab, resigned wife of Robert Morley's Almayer, in Outcast of the Islands (1952), directed by Carol Reed, and she won an Oscar for best supporting actress as Miss Cooper, the lonely hotel manager, in the film of Terence Rattigan's Separate Tables (1958). She was especially memorable as Mrs Morel in Sons and Lovers (1960), and heartbreaking as Alice More in A Man for All Seasons (1966), gaining another Oscar nomination. Later films tended to be as part of all-star ensembles, but she shone as Mrs Micawber to Ralph Richardson's Micawber in David Copperfield (1969) and as the imperious Princess Dragomiroff in Agatha Christie's Murder on the Orient Express (1974).

Hiller had made her television début in 1939, as Grace Darling, but thereafter made few appearances until the 1960s, when she appeared in an episode of Z Cars and read the stories of Alison Uttley on Jackanory. During the 1970s she played Miss Moffat in The Corn is Green, Aase in Peer Gynt, the puritanical Mme Putet in Clochemerle, and the Duchess of York in Richard II. In 1986 she scored a huge success as Lady Slane in All Passion Spent, from the novel by Vita Sackville-West, for which she gained a BAFTA award nomination and the best actress award from the Broadcasting Press Guild.

Hiller's later theatre successes included three appearances in Ibsen: as Irene in When We Dead Awaken (1968) for the 69 Theatre Company in Manchester, directed by Michael Elliott, as Mrs Alving in Ghosts (1972) at the Arts Theatre, Cambridge, and a powerful performance as Gunhild, the icy and miserable wife of Ralph Richardson's John Gabriel Borkman, in Peter Hall's National Theatre revival of the play of the same name at the Old Vic in 1975 and in the Lyttelton in 1976. In the West End she was both splendidly ramrod and fragile as Queen Mary in Crown Matrimonial (1972), Royce Ryton's recreation of the abdication crisis; and as Mrs Whyte, Sybil Thorndike's old role, she expressed much with a disapproving sniff and a click of a knitting needle in a revival of Waters of the Moon with Ingrid Bergman at Chichester in 1977. During the 1980s she played a formidable Lady Bracknell (1982, 1987, and on television), the Old Lady in a revival of The Aspern Papers (1984) with Vanessa Redgrave and Christopher Reeve, and the American lady from the deep south in Alfred Uhry's Driving Miss Daisy (1988). She said:

Luckily, West End audiences seem to rather like very old people. They think, ‘My God, we saw her acting in the war and there she is still doing it,’ and mentally they give you a sort of prize for sheer survival, as long as you turn up every night and remember most of the lines. Not that it ever gets any easier to do.

Hiller was 'the least self- or career-obsessed of great actresses' (McFarlane, British Cinema), preferring to spend time with her family, gardening, or playing golf to enjoying the trappings of stardom. Her great quality as an actress was a spiritual radiance, an emotional integrity and sincerity, whether as a cockney flower girl or an English queen. She was unconventionally beautiful, 'with those marvellous cheekbones and slanting eyes', wrote Mollie Panter-Downes, 'that give her the strong look of a Holbein woman' (New Yorker). She had a unique voice, at once crisp and quavering. Appointed OBE in 1971 and DBE in 1975, she died of bronchopneumonia at her home, 9 Stratton Road, Beaconsfield, Buckinghamshire, on 14 May 2003, and was buried at St Mary's parish church, Radnage, Buckinghamshire. She was survived by her two children.