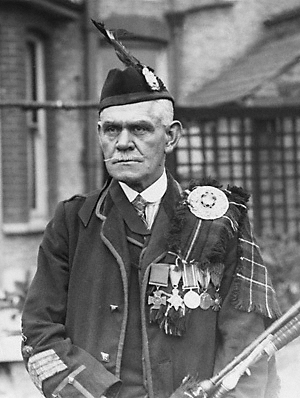 Laidlaw, Daniel Logan (1875–1950), soldier and piper, was born in Little Swinton, near Berwick-upon-Tweed, Berwickshire, on 26 July 1875, one of the three sons of Robert Laidlaw, a quarryman and later engine driver, of Coldingham, Berwickshire, and his wife, Margaret, daughter of Robert Logan of Jedburgh. Educated at Berwick-upon-Tweed national schools and Lesbury, Northumberland, where he was a miller's apprentice, he joined the army on 11 April 1896, serving in India in the 2nd battalion, Durham light infantry. Claimed out by his eldest brother, he joined the King's Own Scottish Borderers and served in that regiment as a piper until 11 April 1912. On 11 April 1906 he married Georgina Mary (d. 1947), daughter of Robert Harvie, of Kilburnie, Ayrshire, at the Baptist Church, Alnwick, Northumberland. They had three sons (Andrew, John, and Victor) and three daughters (Margaret, Georgina, and May). After his Indian service, in which he took part in plague duty in Bombay from 22 March to 1 May 1908, Laidlaw entered the reserve on 11 April 1912, finding employment as a canteen manager at Alexandria, Alnwick Co-operative Stores, and with Messrs D. and D. H. Porter of South Doddington, a firm of horse-breeders. In Alnwick he was also an assistant scoutmaster.

At the outbreak of the First World War Piper Laidlaw re-enlisted in the 7th battalion, King's Own Scottish Borderers, on 1 September 1914 and went to France in the following June. He earned lasting renown on the first morning of the battle of Loos, 25 September 1915. At 6.30 a.m., as his battalion stalled in the trenches after heavy artillery fire from the German guns, and as gas wafted back from British cylinders, Lieutenant Young cried out 'For God's sake, Laidlaw, pipe them together!' Laidlaw promptly scaled the parapets and marched up and down, playing the regimental march, 'Blue Bonnets over the Border'. Suitably inspired, the battalion dashed out of the trenches and Laidlaw followed. Wounded by shrapnel in the left ankle and leg, he hobbled onwards, changing the tune to 'The Standard on the Braes of Mar'. Once the battalion had made its way to the third line of German trenches, Laidlaw scrambled back to his lines amid the dropping shells. Promoted corporal for distinguished service in the field (25 September 1915), he was dubbed the ‘Piper of Loos’ in the Scottish press and his feat of arms was compared with that of Piper George Findlater VC, who had piped the Gordon Highlanders onwards, despite being wounded at the battle of Dargai (20 October 1897).

On 18 November 1915 Laidlaw's citation for the award of the Victoria Cross appeared in the London Gazette, commending his 'absolute coolness and disregard of danger' in the battle. Interviewed in Lord Derby's hospital at Winwick, near Warrington, he was photographed extensively and his portrait painted for the illustrated press. Modestly he received an address from the citizens of Alnwick, and a gold-mounted walking stick, a cheque for £5, and war stock to the value of £60 from a fund raised by the Berwick Journal and the Berwickshire News. After George V decorated Laidlaw with his Victoria Cross at Buckingham Palace on 3 February 1916 he received a gold watch from the Worshipful Company of Musicians at the Mansion House on 28 February 1916, and played the pipes at various wartime concerts. He also received the French Croix de Guerre (with palm), the 1914–15 star, British war medal (1914–20), victory medal with oak leaf for mention in dispatches (1914–19), and later the King George VI coronation medal (1937) and the defence medal (1939–45). Promoted sergeant-piper on 12 October 1917, he was demobilized on 3 April 1919.

If never quite the celebrity that Findlater became, Laidlaw gained more publicity than many contemporary winners of the Victoria Cross, with his portrait appearing in paintings, book illustrations, and the endorsement of tobacco products. He appeared at various formal gatherings for holders of the Victoria Cross: a garden party at Buckingham Palace (26 June 1920), dinner in the royal gallery at the House of Lords (9 November 1929), and the Second World War victory parade in Whitehall and subsequent dinner at the Dorchester hotel (8 June 1946). He also piped at the head of marches to the Cenotaph in the 1930s, notably on 25 September 1932, when he marched alongside Findlater VC and Pipe-Major D. Anderson (Croix de Guerre) to commemorate the battle of Loos.

However, Laidlaw struggled to find work after the war, enduring long periods of unemployment. He sought assistance from the King's Own Scottish Borderers Association and received support from a public fund to educate his youngest son. Laidlaw piped in two films, the Guns of Loos (1929) and Forgotten Men (1933), accompanied a troupe of highland dancers on a tour of Norway in 1934, and piped for the Scottish Country Dancing Club in London. Just before the Second World War he became the sub-postmaster of Shoresdean and then head warden of the ARP in Norham and Islandshires district. Laidlaw died at Shoresdean, near Berwick-upon-Tweed, on 2 June 1950, and was buried in St Cuthbert's churchyard, Norham, Northumberland, where a memorial headstone, organized by the King's Own Scottish Borderers Museum and members of the Laidlaw family, was placed over his grave on 2 June 2002. At a ceremony at the Loos Museum, Belgium, on the ninetieth anniversary of Laidlaw's action, his grandson, Victor, donated his Victoria Cross and other medals to Scotland's National War Museum in Edinburgh Castle.