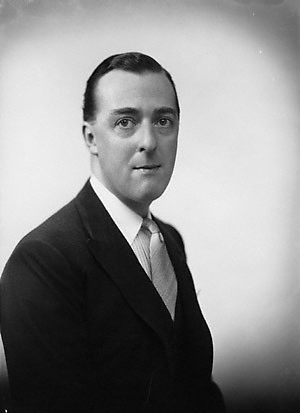 Allan, Sir Anthony James Allan Havelock-, fourth baronet (1904–2003), film producer, was born on 28 February 1904 at Blackwell Manor, Blackwell, Darlington, co. Durham, the third son of Allan Havelock-Allan (1874–1949), army officer and landowner, and his first wife, Anne Julia, née Chaytor (d. 1953), daughter of Sir William Chaytor, third baronet. The Havelock-Allan family bore a distinguished tradition in the army and Liberal politics. His great-grandfather, Sir Henry Havelock, who led the relief of Cawnpore and Lucknow during the Indian mutiny of 1857, died before being made (as intended) a baronet; the honour then fell on his son (Havelock-Allan's grandfather), Sir Henry Marshman Havelock [see under Allan, Sir Henry Marshman Havelock-], who had already been awarded a VC for his role in the mutiny, and who later served as MP for Sunderland and then South-East Durham, and in 1880 changed his surname to Havelock-Allan, under the terms of the will of his cousin, Robert Henry Allan, of Blackwell Grange. Havelock-Allan's uncle, Sir Henry Spencer Moreton Havelock-Allan, second baronet, was Liberal MP for Bishop Auckland from 1910 to 1918.

Havelock-Allan was educated at Mr Gibbs's School in Sloane Street, North Hall preparatory school in Hertfordshire, Charterhouse, and in Switzerland. He was expected to follow family tradition and enter the army, but his eldest brother, Henry, had remained in the Scots Guards after the war (the second brother, Clervaux, died an infant), and Havelock-Allan decided that relieved him of the responsibility and pursued his own inclinations. He worked initially at Garrards, the crown jewellers, and later in the gramophone business, first at Brunswick in London and then in 1927–8 for Vox AG, Berlin. He returned to London as a stockbroker, worked on the classified advertising section of the Evening Standard, and for a time booked the acts for Ciro's cabaret club.

Havelock-Allan had developed a passion for the theatre at an early age, was briefly involved in amateur dramatics, and was happy working in the entertainment business. He therefore enthusiastically accepted the offer of his friend Richard Norton in 1933 to become a casting director at the British and Dominions Film Corporation, working mainly on the low-budget films of Jack Raymond. In 1935 he took over production of 'Quota Quickies' made at the company. These were financed by Paramount and produced at low cost to enable the American company to distribute its own films in Britain in accordance with the Cinematograph Films Act of 1927. Havelock-Allan produced over thirty of these in three years, and though the form was generally maligned as shoddy, such productions were an invaluable training ground for new and inexperienced talent. It was in his character to make the films as well as finances allowed, and he later claimed that they produced an overall profit and solicited better reviews in the trade press than the company's earlier efforts. In films such as Gentlemen's Agreement (1935), The Scarab Murder Case (1936), Missing, Believed Married (1937), and Lancashire Luck (1937) he cast aspiring actors of the calibre of Vivien Leigh, Wilfrid Hyde-White, Margaret Rutherford, and Wendy Hiller, and he later recalled this hectic period as the most enjoyable of his professional life.

In 1936 Elstree Studios burned down and British and Dominions moved its productions to the newly built Pinewood Studios. Havelock-Allan joined a new company there, Pinebrook, which had been established to keep the studios busy and staff employed—producing modest films at times when the studio was underemployed. He produced six films there up to 1940; the first, This Man is News (1938), modelled on fast-moving Hollywood-style crime films such as The Thin Man series, was produced for £14,000 and made ten times that amount at the box office. It featured Barry K. Barnes as a reporter who becomes embroiled in a murder mystery, and also, in a supporting role, the young actress (Babette Louisa) Valerie Hobson (1917–1998). It was Havelock-Allan's first substantial commercial and critical success and spawned a sequel in This Man in Paris (1939). Havelock-Allan and Hobson married on 12 April 1939, and had two children, Simon (1944–1991) and Mark (b. 1951). Simon suffered from Down's syndrome.

During the Second World War, Havelock-Allan contributed the production From the Four Corners (1941), a propaganda short for the Ministry of Information which he also directed. As Pinewood had been requisitioned by the government he joined Two Cities Films, a production company formed in 1937 by a flamboyant Italian lawyer, Filippo del Giudice. Havelock-Allan's first production was Unpublished Story (1942), a routine wartime thriller, starring Richard Greene and Valerie Hobson, about journalists uncovering fifth columnists. His next film was of much greater importance. Del Giudice wanted to finance a big, patriotic picture, and Havelock-Allan through his social connections introduced him to Noël Coward, who responded with the idea about a naval film based on the recent exploits of his friend Lord Louis Mountbatten on HMS Kelly. In Which We Serve (1942), on which Coward was unfairly granted producer credit and Havelock-Allan was named associate producer, was one of the most successful and admired British films of the war, a substantial commercial and propaganda success in America and the film that brought together the acclaimed production team of Havelock-Allan, David Lean, and Ronald Neame. Lean, one of the most brilliant editors in British cinema, was thought necessary to help Coward, the nominal director, on technical matters and gained co-director credit, and Coward suggested Neame as cameraman.

Three further adaptations of the playwright followed. Coward produced in Technicolor for Two Cities both This Happy Breed (1944) and the less successful Blithe Spirit (1945). Havelock-Allan contributed to the scripts and acted as executive in overall control of the productions. The latter film was co-produced by Cineguild, a new production company formed by Havelock-Allan, Lean, and Neame, with production finance and distribution through the Rank Organization. This type of arrangement provided considerable creative freedom and was central to the artistic success of British cinema in this period, supporting other successful independent producers such as Frank Launder and Sidney Gilliat, and Michael Powell and Emeric Pressburger. The professional relationship with Coward ended with a modest black and white melodrama, Brief Encounter (1945), produced by Cineguild. Havelock-Allan's favourite among his productions, it was a major critical and commercial success and remains one of the most loved of all British films.

After four Coward pictures, the Cineguild partners felt it was time to do something different and opted for Lean's ambition to film Great Expectations (1946). Havelock-Allan contributed to the script and acted as executive producer, with main responsibility for the finances and budget. The film was another triumph and was considered by many critics the definitive film adaptation of Dickens. The costume films made at Gainsborough were wildly popular in the 1940s, and it was Havelock-Allan's idea to produce a historical melodrama next, but with a greater fidelity to history. Blanche Fury (1948) was a problematic production with an unhappy male lead in Stewart Granger and a French director, Marc Allégret, with marital problems. While the film looked splendid—a trademark of Cineguild productions—it was harsh, featured unpleasant characters, and offered little opportunity for audience identification. The title character was played by Valerie Hobson, who had featured in Great Expectations and also starred in the lesser Cineguild productions, The Small Voice (1948) and The Interrupted Journey (1949). By this time Havelock-Allan was drifting away from the company, and he worked uncredited on Oliver Twist (1948), an adaptation that failed to reach the critical heights of Great Expectations and drew some censorship difficulties in America.

In 1948 Havelock-Allan formed his own company, Constellation Films, but completed only a handful of productions through the 1950s. These included a charming Italian co-production released in England as Never Take No for an Answer (1951), which reputedly was the first commercial film to receive permission to shoot in the Vatican, and two films with director Anthony Asquith, The Young Lovers (1954) and Orders to Kill (1958). Havelock-Allan had known Asquith, the son of the former Liberal prime minister, at Mr Gibbs's School. In the late 1950s he became convinced of the future of pay television and formed British Home Entertainment with Lord Brabourne and Daniel Angel. The emphasis was on quality productions for a discerning audience, such as An Evening with the Royal Ballet (1963), co-directed by Havelock-Allan and Asquith, and featuring principal dancers Margot Fonteyn and Rudolf Nureyev. Some productions were also released into cinemas, such as the film record of Laurence Olivier's National Theatre production of Othello (1965), and Franco Zeffirelli's Romeo and Juliet (1968), a worldwide smash hit, which perfectly accorded with the youthful Zeitgeist of the time and provided Havelock-Allan with an Oscar nomination for best picture. Ultimately, the government could not be persuaded of the necessity of pay television and as the company was not granted the necessary licences it was sold in 1969. Havelock-Allan's final production reunited him with David Lean on the ill-fated Ryan's Daughter (1970). The family motto of (Fortiter gerit crucem (‘He bears the cross bravely’)) was an apt description of the producer's troubles on an unhappy shoot that went over budget after bad weather and long production delays. When it was eventually released it was mauled by the critics, but later won over a considerable audience.

Havelock-Allan made innumerable contributions to the film industry's professional bodies, which included serving as chairman of the British Film Academy (1952) and chairman of the Society of Film and Television Arts (1962–3). In retirement he continued to take an interest in the film industry, and his advice was often sought. He became the fourth baronet on the death of his unmarried brother Henry in 1975 (their uncle having also died childless, despite three marriages). His first marriage, to Valerie Hobson, had ended in 1952 (she subsequently married the politician John Profumo). On 26 June 1979 he married Maria Theresa Consuela (Sara) Ruiz de Villafranca, daughter of Carlos Ruiz de Villafranca, the former Spanish ambassador to Chile and Brazil.

It is often difficult to discern the specific contribution a producer makes to a film. However, it is generally acknowledged that Havelock-Allan was a producer of taste and distinction, and in the period with Two Cities and Cineguild he was pivotal in producing some of the most accomplished films in a period of outstanding achievement. These films were characterized by superb scripts, immaculate casting, and the highest production values. Havelock-Allan was a ‘creative’ producer, suggesting ideas, shooting some scenes, contributing to scripts, and recruiting the ideal artists and technicians. He received Oscar nominations for his work on the scripts of Brief Encounter and Great Expectations as well as for producing Romeo and Juliet. A 'thoughtful man, conscientious and indeed fastidious in the things he undertakes' (Kinematograph Weekly, 8 April 1948), he was widely liked and admired and always ready to help researchers, historians, and programme makers. He died of bronchopneumonia at the London Clinic, 20 Devonshire Place, Westminster, on 11 January 2003, and was survived by his wife, Sara, and son Mark, who succeeded him as fifth baronet. At the time of his death he had been working on his autobiography.