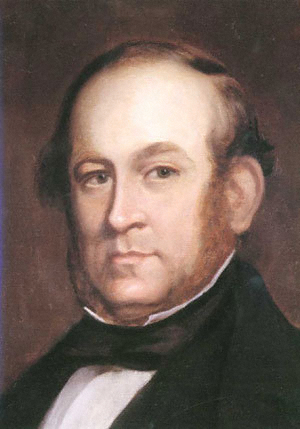 Lyle, Abram (1820–1891), shipowner and sugar refiner, was born in Greenock, Renfrewshire, on 14 December 1820, the sixth of the seven children of Abram Lyle (1783–1849), cooper and shipowner, and his wife, Mary Campbell. The young Abram was educated at the locally prestigious Murray's School; at the age of twelve he was apprenticed to a lawyer, James W. Turner (at a salary of £3 per annum), but two years later joined his father as an apprentice cooper. In the period before his father's death in 1849 the business had declined and the elder Lyle had taken to drink. This might have been the reason for Abram's life-long commitment to temperance. He also took it on himself to clear his father's debts out of a sense of honour. The young Lyle had to make his own way and did so through an informal business arrangement with John Kerr while continuing as a cooper. The two men, whose business was based entirely on friendship, built up a fleet of ships which grew from 161 tons in 1849 to 22,000 tons in 1870; formally all belonged to Kerr. On 14 December 1846 Lyle was able to marry Mary Park (c.1824–1881), the daughter of a local building contractor; the couple had two daughters and seven sons. As demand for sugar grew so did the market for casks to carry sugar and molasses from the Caribbean, as a return cargo for coal and textiles, in Kerr's ships. Greenock became one of the major sugar-refining centres in Britain in the 1860s.

In 1865 Lyle and Kerr (together with Charles Hunter and James and Walter Grieve) purchased a refinery which they named the Glebe Sugar Refining Co. Lyle transformed it into the largest in Greenock. On Kerr's death in 1872 Lyle inherited a share in four ships, buying them outright a year later, whereupon he set up his own line: the Cape Line. By 1880 he had ten (sailing) ships, and bought a steamer, the Cape Clear, in the following year. He had made an earlier move to independence in 1879 when, with the intention of building a larger refinery, he sold his interest in the Glebe company to the other partners. Denied permission for a private berth in Greenock harbour, he sought out an alternative site on the River Thames at Plaistow to the east of London. Building began in 1881 and the following year Abram Lyle & Sons was established. The refinery was managed by four of his sons, Charles, Abram, William, and John, and 400 families moved from Greenock to provide a skilled workforce. Lyle himself did not move to London. His wife, Mary, died suddenly on 24 June 1881, and Lyle married again on 29 November 1882; his second wife was Elizabeth Gordon Cumming.

It was at this time that Lyle's business underwent a change. In 1883, following a large European beet harvest, the price of raw sugar collapsed while all the company's assets were in cargoes at sea, including Lyle's Javanese sugar which lost £100,000 when it was sold. The new refinery, which had begun operating in January 1883, was kept going only by persuading the Bank of Scotland to extend its credit, and by selling the cooperage business in Greenock and the Cape Line's only steamer. The major boon to the company, however, was golden syrup, the product that provided most profit and one with which the company name was forever to be associated. Lyle's was not the only company to produce syrup but, using a secret formula, theirs was of higher quality and could command a premium price. It had probably been made, along with other sugar products, in Greenock, but from 1885 the Plaistow refinery began to sell it in tins bearing the now famous trade mark of a lion surrounded by bees. Lyle's shipping line (which was run by two other sons, Alexander and Robert) was, however, deprived of capital for the sake of the refinery. By 1890, with the fleet reduced to only four ships, the two businesses were divided into private limited companies.

During the 1870s Abram Lyle gradually withdrew from business and left management of the companies to his sons. He now took an active interest in Greenock public affairs. A town councillor from 1858, he became a magistrate in 1860 (retiring in 1885), and was elected provost from 1876 to 1879. It was during these years that the Lyle Road was built in the town as a work creation scheme. In 1880 he paid for the construction of a fountain in the town's Cathcart Square. Lyle was also a director of the Glasgow and South West Railway Co., of the Greenock Infirmary, and of the North British and Mercantile Insurance Co.; he was chairman of the local marine board and had an interest in several local charities. Lyle was a bearer and elder of St Michael's Presbyterian Church, Greenock, and his strong religious beliefs prompted him to lead an ascetic life; though he played the flute and was a good singer and an effective platform speaker, business dominated to the extent that he resisted sport and other amusements. Lyle's faith may also explain his choice of the lion and bees as the trademark for the company's golden syrup. The image is taken from Judges 14, in which Samson, having killed a lion, returns to find bees producing honey in its carcase; Samson later used the image as a riddle: 'Out of the eater came forth meat, and out of the strong came forth sweetness' (Judges 14: 13), of which the second part was reproduced on Lyle's syrup tins.

By the 1860s Lyle was sufficiently wealthy to build a large house, Oakley, in Gourock, overlooking the Clyde, and to have a summer house at Innellan, Argyll. He left only a small estate (£42,540) at his death but made generous gifts to his sons (£230,000) during his lifetime. Lyle died at Oakley from pneumonia on 30 April 1891 and was buried in Greenock. Although the funeral was a family occasion, several thousand Greenock residents lined the streets in tribute. Lyle was survived by his second wife. Control of Abram Lyle & Sons passed to his sons Abram, Charles, William, Robert, and John, and then to his grandsons, among whom the most prominent was Leonard Lyle (1882–1954); it was under Leonard's directorship that the company amalgamated with another refiner, Henry Tate & Sons, to form Tate and Lyle in 1921.