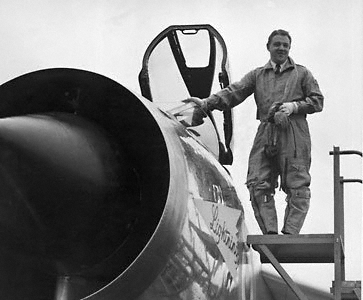 by William Vanderson, 1958 [with the English Electric P1B Lightning at Farnborough]

Beamont, Roland Prosper (1920–2001), air force officer and aviator, was born on 10 August 1920 at 8 Private Road, Enfield, Middlesex, the son of Lieutenant-Colonel Ernest Clement Beamont, a trade officer with the Foreign Office, and his wife, Dorothy Mary, née Haynes. Educated at Eastbourne College (1934–7), he took his school certificate in 1938 after private tuition, for he was determined to be accepted into the RAF. Though rejected for Cranwell he gained flying experience at the civil flying school, White Waltham. Awarded a short service commission in April 1939, he was posted to 13 flying training school, Drem, flying Hawker Hart biplanes and then Hurricanes. In November he was sent to France to join 87 squadron, with the British expeditionary force, gaining his first experience of air combat during the blitzkrieg of May 1940. Withdrawn and then re-formed, 87 squadron took part in the battle of Britain, then in October 1940 was put on night-fighter duties, for which its Hurricanes were ill-suited. It was taken off this role in May 1941, when Bee Beamont (as he was known) was posted to another Hurricane squadron (79) as a flight commander. In June he was awarded the DFC.

An attachment to Hawker Aircraft Company from December 1941 as a production test pilot was to have dramatic consequences for Beamont's RAF career, for he became involved in the development of the Typhoon fighter, which had engine and airframe problems, and with which he was to become operationally acquainted when posted as a flight commander to 609 squadron in June 1942. The Typhoon's problems, and its failure to fulfil expectations as an intercepter, nearly led to its withdrawal from service. Beamont's personal courage and determination helped to save it, and it became a devastating ground-attack weapon in operation Overlord, the allied invasion of Europe.

On 13 October 1942, Beamont married a WAAF officer, Shirley Dagmar Adams (1921/2–1945), daughter of Bernard Robert Adams, painter, and on the 17th was given command of 609 squadron. In January 1943 he was awarded a bar to his DFC and in mid-May was again seconded to Hawker Aircraft as a test pilot, when an even more powerful fighter—the Tempest—was being developed. On 25 May he was awarded the DSO.

With this firsthand experience, Beamont was charged in February 1944 with forming the first wing (three squadrons) of Tempests. It became operational in May and played significant roles in supporting the Normandy landings, destroying 638 V1 flying bombs, attacking V2 launch sites, and—based in the Netherlands—giving air cover for the advance into Germany. On 25 July he was awarded a bar to his DSO. Early in October 1944 he had a brief leave with his wife and their baby daughter, Carol; Shirley watched from the Dunsfold control tower when he took off to return to the wing's base at Volkel. This was the last time they saw each other, for three days later his Tempest was shot down by ground fire and he spent the rest of the war as a prisoner of war. When liberated by the Red Army in May 1945 and flown back to the UK in June he telephoned his father, to be told that Shirley had died in hospital two weeks previously.

In July 1945 Beamont was posted to the Central Fighter Establishment, his application for a permanent commission having been accepted. But he decided that his future lay in test flying and in 1947 he joined English Electric, which after producing bombers during the war and then Vampire jet fighters had embarked on developing a twin-jet bomber of its own design, which became the Canberra—an aircraft with which Beamont was indelibly associated. On 14 March 1947 he married again, his new wife, Patricia (1922/3–1999), the daughter of Richard Galpine Raworth, solicitor, and divorced wife of Philip Whitehead, having a young son from her previous marriage. Theirs was an outstandingly happy partnership, and they had two daughters.

With his sound domestic background, firsthand experience of combat aircraft, and well-proved courageous determination, Beamont was at the leading edge of British military aviation for thirty-two years, making the first flights of the Canberra, Lightning, and TSR2. He first flew supersonically in a prototype P86 Sabre in the USA in 1948. On 13 May 1949 he made the first flight of the Canberra and in September demonstrated it superbly at the Society of British Aerospace Companies Farnborough air display. On 23 February 1951 he showed it off so effectively to US Department of Defense officials that in April they signed a contract for Canberras to be built under licence by the Glenn L. Martin Company. On 26 August 1952, with Peter Hillwood as co-pilot and Denis Watson as navigator, he made a double Atlantic crossing—from Belfast to Gander, Newfoundland, and back in 7 hrs, 59 mins.' flying time, setting a world record and being awarded the Britannia trophy by the Royal Aero Club. He was made OBE in 1953.

With the P1, named Lightning by the RAF, which he first flew on 4 August 1954, Beamont became the first British pilot to fly supersonically in level flight. This twin-engined Mach 2 fighter entered Fighter Command service in 1960. From 1961 he was involved in the development of the TSR2 (tactical strike / reconnaissance) aircraft, a joint project by English Electric and Vickers, merged to become British Aircraft Corporation. He made the first flight from Boscombe Down on 27 September 1964, but on 6 April 1965 the Labour government cancelled the project, causing dismay and bitterness in the UK aircraft industry—expressed by Beamont in his book Phoenix into Ashes (1968). He was director of flight operations, British Aircraft Corporation, from 1965 to 1978, being seconded in 1971 to Panavia, the three-nation company set up to develop the fighter which became the Tornado. In the 1969 new year honours he was made a CBE.

Beamont retired in 1979, writing ten books (two of them co-authored) about his flying experiences. He died of chronic lymphocytic leukaemia on 19 November 2001 in Salisbury District Hospital, widely honoured and admired for his outstanding contribution to British military aviation. His wife, Patricia, had predeceased him; he was survived by his stepson and three daughters.