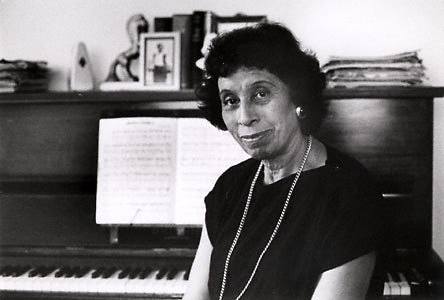 Cann, Rita Evelyn [performing name Rita Lawrence] (1911–2001), pianist and singer, was born on 24 January 1911 at Heathfield, Box Ridge Avenue, Beddington, Surrey, the elder daughter and eldest of three children of Albert Sam Cann (1871–1930×34), an import–export merchant, and his wife, Emma Elizabeth, née Dowsett (1886–1967), a teacher. Her father was a Fanti from the Gold Coast, whose mother was partly Egyptian; her mother was English. On her father's side she came from a family which belonged to a significant group of African entrepreneurs operating in the Edwardian world of commerce. Her father, originally a goldsmith and hunter, became successful exporting mahogany, tobacco, and cocoa, and it was while he was in England searching for accommodation for his student nephews that he learned of a Dulwich-based community formed to assist Africans with lodgings. Hannah Dowsett (née Lawrence), who was originally from Essex, was a member of this body, and it was through her enlightened encouragement that Albert Cann and her daughter Emma married in 1909.

Rita Cann was brought up in Streatham, south London, where she had a nursemaid before attending a local school. Her general education and musical studies continued in Germany, where her father's business interests lay and where the family moved about 1918. As a black child in Germany she had to fight her corner from the start. She encountered scepticism on taking piano lessons, but impressed her rigid woman teacher—a friend of Wagner's widow—with her knowledge of the Ring cycle. About 1925 the family moved to Vienna. She continued her musical studies while her father's business reputation deteriorated. When he was arrested for fraud, Rita Cann showed the mettle that characterized her life by forcing her way into the judge's chambers and, in fluent German, successfully pleading her father's case for a hearing. Her musical studies continued in Amsterdam, probably at Kaiser Wilhelm Schule, and she also trained and worked there as a dancer.

Following her father's death Cann moved to London about 1934. There she met the African-American singer John Payne and joined the circle of black intellectuals and artists who met regularly at his Regent's Park flat. As a member of Payne's choir she accompanied Paul Robeson on film and record and in concert. She returned to the Netherlands about 1936 or 1937, but with war looking increasingly likely she returned to England in 1938. As one of the few visible black women in London society she was in demand as a singer and dancer for nightclubs and stage-shows, although neither was the true métier for an academically trained pianist and singer. She sang with the band formed by the Jamaican trumpeter Leslie Thompson after the dissolution of his venture with Ken ‘Snake-Hips’ Johnson and in 1938 she joined the chorus at the Drury Lane Theatre as a dancer and singer, accompanying Adelaide Hall in The Sun Never Sets. At Hall's Florida Club in Mayfair she danced and was accompanied by the American pianist Fats Waller, with resident bandleader Fela Ṣowande playing organ. Ṣowande, a formidable Nigerian, gave her the confidence to sing with his Jubilee Singers. After changing her professional name to Rita Lawrence (taking the maiden name of her maternal grandmother) she sang with the Guyanese clarinettist Rudolph Dunbar.

The Second World War saw Cann working in Soho at unlicensed 'bottle-parties' such as the Nest and Smokey Joe's which relied on jobbing musicians for entertainment. She enjoyed singing, shaking maraccas, and deputizing for other pianists, but she did not entirely identify with that raffish world. This changed when she met the flamboyant Cuban pianist Don Marino Barreto (1907–1995), with whom she began a relationship in 1943. Although she had already been captivated by Latin-American rhythms through hearing the Lecuona Cuban Boys in Amsterdam, Barreto encouraged her latent interest. He agreed to teach her the idiom if she would return to her studies at the Guildhall School of Music. She played second piano and maraccas with his band for engagements at society nightclubs and troop concerts, including one on the eve of the Arnhem landings.

In 1946 Cann formed her Havana Sextet to play at an exclusive Thameside hotel. Her brother Lawrence Cann wrote the group's musical arrangements and was its double-bassist, and for a period she had Eddie Calvert as her trumpeter. In 1953 she joined Fela Ṣowande's re-formed choir with which she appeared on BBC television's Club Ebony; then, as pianist, she formed a double-act with his barrister brother, Tunji Ṣowande, a baritone singer. An accomplished pianist, she was the first black British woman to lead an instrumental group in society circles. Politicized by her early experiences, she was committed to the idea of raising both the profile and expectations of people of African descent, and her west African connections retained lifelong importance for her: she attended gatherings concerned with the anticolonial struggle and moved socially among African professionals, journalists, civil servants, and politicians. She recognized the importance of personal presentation and always cut a dignified figure, dressed in chic, well-tailored clothes. She retained elegant pre-war manners and speech, and had a fine sense of humour: on recalling the day that she and Robeson put the world to rights, she commented 'I was very Red!' (personal knowledge).

Cann left music to work as a telephonist at the British Museum. In her later years she visited west Africa, but she never reached Ghana (formerly the Gold Coast) and her surviving family members. Although they separated in the early 1950s, she and Marino Barreto remained close. She moved to Stockholm to live with him briefly in the 1970s, and for several years afterwards they exchanged sheet music and musical ideas. She continued to play the piano for her own pleasure and, accompanying Tunji Ṣowande, at concerts and charity dates for the elderly. She died on 4 May 2001 at Burges House, 77–85 Newport Road, Cardiff; her body was cremated in Cardiff.