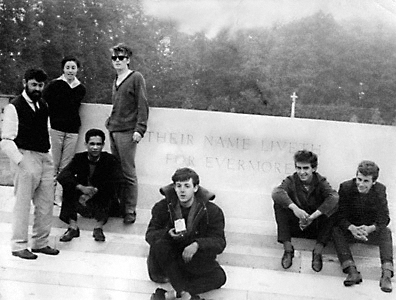 by unknown photographer, 1961 [Phillips, sitting on left, with members of The Beatles]

Phillips, Harold Adolphus [known as Lord Woodbine] (1929–2000), calypsonian and music promoter, was born on 15 January 1929 in Laventille, Trinidad, the fifth of the seven children of James Phillips, a Venezuelan-born butcher, and his wife, Edna, who was originally from Grenada. Phillips was raised and educated in Laventille but with few available opportunities he lied about his age and enlisted in the RAF in 1943, aged just fourteen. After training at Burtonwood, Lancashire, Phillips returned to Trinidad in 1947. In Laventille he began performing calypso on street corners; with few locals able to afford newspapers, his songs provided commentaries on topical events. In June 1948 Phillips returned to England on the Empire Windrush. Two older Trinidadians on board were also calypsonians: Egbert Moore (known as Lord Beginner) and Phillips's friend Aldwyn Roberts (known as Lord Kitchener), both of whom became popular calypso musicians in post-war Britain. Phillips's own sobriquet derived from one of his songs, which included characters named after cigarette brands (including Woodbines), and like lords Beginner and Kitchener marked his distinction as a calypsonian.

In London, Phillips stayed initially with fellow Windrush migrants at the deep shelter, Clapham South, before finding work as a machinist at the Wellington Industrial Hostel, Wellington, Shropshire. He formed a band, Lord Woodbine and his Trinidadians, and was among the first calypsonians to tour England. At a talent show he met Helen (known as Ena) Agoro (1928–2000), the daughter of Thomas Agoro, a Liverpool steamship fireman. Ena performed jazz songs and became the vocalist for Phillips's next band, the Cream of Trinidad. They were married on 19 November 1949 at St Michael in the City Church, Liverpool, and settled in the Toxteth area where they raised a son and seven daughters.

During the 1950s Phillips worked as a railway engineer, carpenter, decorator, gardener, builder, electrician, and lorry driver. He also opened a drinking venue in Liverpool, the New Colony Club. In the evenings he sang calypso and played the guitar in local clubs, and in 1955 formed one of Britain's earliest steel bands, the All Caribbean Steel Band. An occasional member was Winston ‘Spree’ Simon (1930–1976), who in 1951 had introduced steel pan to Britain with the Trinidad All-Stars Percussion Orchestra. Woodbine played tenor pan and made steel pans from oil drums and bamboo wood. In 1958 the band took up nightly residence at Liverpool's Jacaranda coffee bar, owned by the entrepreneur Allan Williams.

Phillips was an early promoter of the Beatles, who, as teenagers, attended performances by the All Caribbean Steel Band. John Lennon and Paul McCartney also socialized with Lord Woodbine, the first singer-songwriter that the young musicians had met, and such was their interest that they were briefly dubbed 'Woodbine's Boys'. The Beatles, then performing as the Silver Beetles, occasionally played the Jacaranda on Mondays, the night on which Woodbine's band did not perform. In 1960 Phillips and Williams opened a strip-club, the New Cabaret Artists' Club, where the Beatles, among others, provided musical entertainment. In the same year the All Caribbean Steel Band broke up and Phillips followed them with a new group, the Rhythm Calypso Boys, who innovatively combined steel pan with electric guitars.

With the Trinidadian pannist Gerald Gobin, Phillips initiated, and helped oversee, the Beatles' first trip to Hamburg, where Gobin had performed. Then a four-piece guitar group, also featuring George Harrison and Stuart Sutcliffe, the Beatles believed that guitars alone provided sufficient rhythm for their music. As a percussionist Woodbine disagreed and urged them to recruit a drummer, which led to the arrival of Pete Best in August 1960. Debates have since centred on the contribution, or otherwise, of Liverpool's black musical scene—relative to American rhythm and blues—for the Beatles' emerging sound. Hopeful of finding a German audience for English beat music, Williams and Phillips booked the Beatles to perform at Hamburg's Indra and Kaiserkeller clubs. Accompanied by Allan Williams, Phillips drove the band to Hamburg, stopping for a group photograph at the Arnhem military cemetery, Oosterbeek. Lord Woodbine also shared the stage on their first night in Hamburg where, between August and December 1960, the Beatles developed markedly as live performers.

In 1961 Phillips became the manager of another of Williams's Liverpool clubs, the Blue Angel. Following a dispute over fees owed to Williams the Beatles severed their ties with their former agent, and in November signed Brian Epstein as their new manager. About 1962 the band's members also lost contact with Lord Woodbine. Phillips was reluctant to profit from his involvement with the group, and his role in their development—like his own musicianship—has been largely neglected in Beatles literature, though his contribution was recognized by McCartney in Geoff Wonfor's 1997 documentary film of the Beatle. In 1992 Phillips was offended to discover that he (and Williams) had been airbrushed out of a version of the Arnhem photograph, then on display at the Liverpool Playhouse. The omission later prompted Phillips to speculate whether 'the great Beatle publicity machine didn't want any black man associated with their boys' (The Observer, 2 Aug 1998).

In the early 1960s Lord Woodbine continued to perform as a pannist and calypsonian, and in July 1965 he led the All Caribbean Steel Band on the ITV television talent show Opportunity Knocks. In 1969 he posed as the model for Arthur Dooley's sculpture The Resurrection of Christ, which adorns Princes Park Methodist church, Toxteth. Until the 1990s Woodbine ran a second-hand shop, repaired clocks, and taught carpentry. Although he ceased performing in clubs about 1980, he occasionally performed calypso at Pee Wee's Barber's Shop, Liverpool 8. In 1998, to mark the fiftieth anniversary of the Windrush voyage, Phillips returned to Trinidad with the journalist Tony Henry, who recorded a radio documentary of his life story. Henry's interviews with Phillips and his circle, which were also published in The Observer, brought him to a wider audience. Unlike his fellow Windrush calypsonians, lords Egbert and Kitchener, Lord Woodbine did not record his music. However, his influence has been recognized by later musicians, among them Brother Valentino, whose historical calypso 'Where Kaiso Went' (2006) distinguishes Woodbine as a calypsonian, steel pan player, and mentor to the Beatles. Harold Phillips died, with his wife, in a fire at their home, 3 Carlingford Close, Toxteth, Liverpool, on 5 July 2000. He was buried at the city's Allerton cemetery.