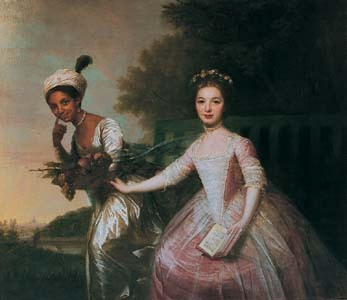 from the collection of the Earl of Mansfield, Scone Palace, Perth

Belle [married name Davinier], Dido Elizabeth (1761?–1804), protégée of the first earl of Mansfield, was the illegitimate daughter of Sir John Lindsay (1737–1788), a captain in the Royal Navy. Her mother was a black slave of African origin, Maria Belle, whom Lindsay had taken prisoner from a Spanish vessel in the West Indies and brought to England, where Dido was born, possibly in June 1761. Dido’s baptism took place on 20 November 1766 at St George's, Bloomsbury, London (the parish church of Lord Mansfield’s London house), when she was five years old. The archives allow us to trace a little of Maria Belle’s later life. An indenture document dated 1774 transferred land Lindsay owned in Pensacola, Florida (‘Lot Six in the Navy Ground’), to Maria, who was then described as ‘a Negro woman of Pensacola … residing in London’ (CO5/615:128–135). It also shows that she had been freed by Lindsay. Spanish records postdating the 1781 battle of Pensacola also refer to a ‘Mrs Bell, widow’ (Feldman), who was most probably Dido’s mother, but following this she disappears from the record.

Dido Belle's historical significance relates to her unusual position as a black girl taken into the care of William Murray, first earl of Mansfield (1705–1793). Mansfield was the uncle of Sir John Lindsay and he seems to have welcomed Dido into his household as a playmate and later companion for his great-niece, Lady Elizabeth Murray (c.1763–1823), whom Lord and Lady Mansfield had adopted. Dido lived with the family at their house in Bloomsbury Square until 1780 and then at Kenwood House. She held a position balanced between family member and servant and was in charge of the dairy and poultry yard. Her familiarity with Lady Elizabeth Murray shocked Thomas Hutchinson when he attended a family dinner in 1779: 'A Black came in after dinner and sat with the ladies and after coffee, walked with the company in the gardens, one of the young ladies having her arm within the other' (Adams, 10). Mansfield was fond of Dido and provided her with an education, an allowance, and gifts.

A portrait of Dido Belle with Lady Elizabeth Murray, attributed variously to Johan Zoffany or David Martin, shows an attractive woman with dark skin, a long, straight nose, and large, dark eyes. Dido wears outmoded masquerade dress associated with black servants and the exotic while Elizabeth is shown in contemporary fashion. Thus the artist has suggested the relative ambiguity of status between the two sitters in the portrait. Hutchinson's description of Dido was biased by his racial opinions: 'her wool was much frizzled in her neck, but not enough to answer the large curls now in fashion. She is neither handsome nor genteel—pert enough' (Adams, 10).

As lord chief justice from 1756 to 1788 Mansfield had jurisdiction over cases involving slaves and the presence of Dido Belle as his ward made some planters sceptical about his judgments. Indeed, Mansfield's judgment of the case of James Somerset (22 June 1772) was popularly and erroneously believed to emancipate slaves in England. Mansfield himself was aware that the Somerset case merely prevented planters from forcibly returning slaves resident in England to the West Indies. Acknowledging the continued legality of slavery in England, Mansfield carefully stated Dido's freedom in his will of 17 April 1782.

Dido Belle was well looked after by the Mansfield family and was financially secure, though it appears she received nothing from her father following his death. Sir John had no legitimate heir and in 1788 left his son John Lindsay (b. 1767) £1000 in trust. A second child was also bequeathed £1000: this was previously thought to be Dido, but has since been identified as Elizabeth Lindsay (1766–1842), Sir John's other illegitimate daughter (two further illegitimate children died in infancy). After Lord Mansfield's death in 1793, Dido received an annuity of at least £100 and a lump sum of £500. Lady Margery Murray also left her £100.

On 5 December 1793 Belle married John Davinier (1768–1847), a steward, at St George's, Hanover Square, London; both were resident in the parish. The couple had at least three sons (the twins Charles and John, and William Thomas) who were also baptized at St George's on 8 May 1795 and 26 January 1802 respectively. Of these, Charles entered the Madras infantry, rising from captain to major in 1841, and becoming a lieutenant colonel in the Indian army in 1855. Meanwhile, William Thomas worked as a clerk in London in the accountant general’s department of the new government of India, later becoming company secretary of the Hendre-Ddu Slate and Slab Quarry Company. Dido Belle died in 1804 and was buried in July that year at St George's Fields, a burial-ground for St George's, Hanover Square, near the modern Bayswater Road; her grave was moved in the 1970s during development of the site. She was survived by her husband, who later remarried, had two more children, and returned to his native France. A period drama film Belle, loosely inspired by Dido’s life, appeared in 2014 (theatrical release).