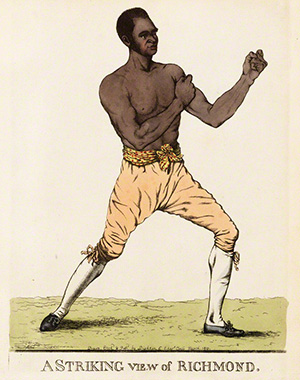 Richmond, Bill (1763–1829), pugilist, was born on 5 August 1763 on Staten Island, New York. Either his enslaved Georgia-born black parents or their master, the Revd Richard Charlton, rector of St Andrew's Anglican Church, named him Richmond after the capital of Staten Island. During the American War of Independence St Andrew's continued to hold services but was also used as a hospital for the British sick and wounded, and Charlton acted as the chaplain of Lieutenant-Colonel Christopher Billopp's battalion of Staten Island loyalists. Whether through Charlton, or on his own initiative, the adolescent Richmond came to the attention and into the service of one of the British officers in occupied New York city. Hugh, Earl Percy (later the second duke of Northumberland), in 1777 took him to England, where he sent him to school in Yorkshire and later apprenticed him to a cabinet-maker in York. However, his career soon took a different turn.

The young Richmond attracted attention in York because he always prided himself on dressing smartly and cleanly after work. Insulted at a racetrack by a knife-grinder, George Moore, a 14 stone local bully, the shorter Richmond (at 10 stone 12 lbs) accepted a challenge from Moore; in the fight he blinded Moore. Soon thereafter Richmond beat two other soldiers who challenged him at the races. After being insulted and kicked by a 13 stone blacksmith, Richmond beat him as well. His next recorded victory was over a York brothel-keeper, who had called him a 'black devil' when he saw him walking down the street with a white female companion.

Richmond became a professional boxer when he moved to London at the beginning of the nineteenth century. Although he was beaten by George Maddox in three rounds at Wimbledon Common on 23 January 1804, the left-handed Richmond went on to a series of victories in 1805: over a whip-maker named Green in ten minutes at Islington Green on 12 April; the Jewish boxer Youssop in six rounds for a 10 guinea purse at Blackheath on 21 May; and Jack Holmes, known as the Coachman, in twenty-six rounds at Cricklewood Green, near Kilburn Wells, on 8 July. But Richmond was defeated by the 14 stone 3 lb future heavyweight champion Tom Cribb in a ninety-minute fight at Hailsham, Sussex, for a 25 guinea purse.

Having temporarily retired from the ring, Richmond did not fight again until he beat Jack Carter at Epsom Wells in 29 minutes on 14 April 1808 for 15 guineas. He defeated Isaac Atkinson, a waterman, in 23 minutes for a subscription purse at Combe Wood on 9 April 1809. In a 100 guinea rematch with George Maddox near Margate on 9 August 1809, Richmond took his revenge in 52 minutes. He went on to beat Jack Power in 15 minutes for a £20 purse at Bob's chophouse, Holborn, in London on 1 May 1810.

Some time after his defeat of Power, Richmond became the popular publican of the Horse and Dolphin tavern on St Martin's Street, Westminster, from which he dispensed boxing advice as well as alcohol to aspiring fighters and celebrities, including Lord Byron and William Hazlitt. Richmond treated the young American-born former slave Tom Molineaux as his protégé, but was repaid with ingratitude. Richmond was known for his even temper in the face of taunts, though at least once he tossed out a young loudmouth. Besides occasionally giving exhibition fights in London theatres, he sometimes still fought professionally. For example, before a crowd of 10,000 spectators at Mousley Hurst, he beat Tom Shelton, half his age, for a £25 purse, after having threatened to withdraw if Shelton continued to refuse to shake his hand before the fight.

When he was fifty Richmond was said to look fifteen years younger because of his temperate lifestyle. He was a talkative man with a sense of humour. Aside from his talent for boxing, he was also a fine cricketer, despite a bad knee. He died in his house on Titchbourne Street, Haymarket, on 28 December 1829. According to his obituary, he spent his last evening, as he had many before, in the company of Tom Cribb, and although apparently in perfect health died in bed suddenly, after a coughing fit.