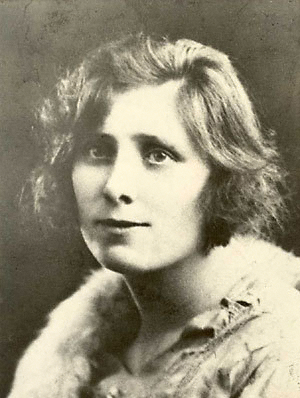 Sinclair, Margaret Anne [name in religion Sister Mary Francis of the Five Wounds] (1900–1925), Poor Clare nun, was born at 24 Middle Arthur Place, Edinburgh, on 29 March 1900, the second daughter and third of six surviving children of Andrew Sinclair (1872–1924), a street-sweeper employed by the city corporation, and his wife, Elizabeth, née Kelly (1871–1956), of Dundee. Originally a member of the Church of Scotland, Andrew Sinclair converted to Roman Catholicism in the autumn of 1895, before his marriage to Elizabeth on 1 January 1896. They were a tight-knit, devout family. Margaret was brought up in their three-roomed flat at 13 Blackfriars Street, Edinburgh, and from the age of about five attended St Anne's Roman Catholic school, run by the Sisters of Mercy, in Edinburgh's Cowgate. She was a satisfactory pupil, barely remembered by her teachers; fellow classmates described her as lively and fun. Later she took dressmaking and cookery classes at Atholl Crescent School for Domestic Economy. Although prone to sickness, she was said to have been a considerable support to her mother, who suffered from depression. During her youth she was regular in her religious observance, a quality she shared with her elder sister, Isabella: even as a worker, she attended mass daily.

In 1914 Sinclair began full-time factory employment as an apprentice french polisher at the Waverley Cabinet Works, where she remained until 1918; from then until 1923 she worked for Sheerwinter, the Civil Service Stores, and the biscuit manufacturers McVitie and Price. Her earnings eased the family's financial hardship and permitted her and her sister Isabella to take summer holidays, two of which had a profound influence on her life. During the first, at Rosewell, she spent much of her time in prayer; in the second, at Bo'ness in 1919, she started a relationship with a former serviceman and lapsed Catholic, Patrick Lynch, which became complicated when his affections grew stronger than hers. Biographers have suggested that she only became involved with him to bring him back to the church, but the couple had been engaged for a time before she finally forced herself to break off the relationship in 1922. After this she began seriously to consider becoming a nun, following Isabella who entered Edinburgh's congregation of the Little Sisters of the Poor in June 1923.

Margaret Sinclair entered the Poor Clare Colettine order, in Notting Hill, London, on 21 July 1923, was clothed as an extern sister and given the religious name Sister Mary Francis of the Five Wounds on 11 February 1924, and was professed on 14 February 1925. Reputedly the most physically and mentally intense religious order, the Poor Clare Colettines lived a rigorous daily schedule of poverty, prayer, and penance. They relied, as an enclosed order, upon the extern sisters as their link to the world, and their absolute poverty required them to subsist on what they themselves could obtain through donations, gardening, and begging, the latter being the exclusive responsibility of the extern sisters. Margaret Sinclair's experience in the convent was similar to that of many other women religious: personality clashes and cultural differences caused friction, and at times, she was regarded as disobedient, languid, and even annoying. Soon after her profession she was found to be suffering from tuberculosis, and was admitted to a sanatorium run by the Sisters of Charity at Warley, Essex, on 9 April 1925. She remained there until her death on 24 November 1925. She was buried at Kensal Green cemetery, London, but on 22 December 1927 her remains were reinterred at Mount Vernon cemetery, Edinburgh. On 6 October 2003 they were finally placed in the side chapel of St Patrick's, Edinburgh, the church of her childhood.

The campaign for Sinclair's beatification and canonization unofficially began in 1926 when prayer cards and biographical publications started surfacing in a variety of languages, including English, French, Italian, Spanish, and Dutch. A Scottish National Margaret Sinclair Committee, with clerical representatives from Edinburgh, Bearsden, Glasgow, and North Berwick, was established by her longstanding confessor, Thomas J. Agius SJ. In August and September 1930 her cause officially began with the informative process when her virtues were examined and the findings sent to Rome. The next official step came in 1939 when her writings were approved by theologians. In 1942 Pius XII signed the introduction of her cause into the Sacred Congregation of Rites, in 1952 the apostolic process in the cause of beatification began, and on 6 February 1978, the centenary year of the restoration of Scotland's Roman Catholic hierarchy, she was officially declared venerable by Paul VI.

Margaret Sinclair had become a household name in Scotland, and her popularity also extended across Britain, North America, and Europe. Her following in Holland became significant enough to merit the publication of a Margaret Sinclair quarterly magazine in the 1950s. Her spirituality had a unique innocence and people were drawn to her ordinariness: she had regular physical features, was not outstanding in school, enjoyed herself at dances and parties, followed fashion trends, worked as a tradesperson, and had even been engaged. She lived and worked during a period of intense industrial unrest and militant trade unionism in Scotland, and there seems to have been a desire by the church to contain the more radical elements by promoting piety and obedience, qualities Sinclair possessed. Championed as Edinburgh's ‘factory girl’, an image promoted in illustrated postcards, pamphlets, and newspaper articles, her designation as both a trade unionist and proponent of equal pay for women is perhaps an exaggeration, as little evidence exists to support such claims. It is likely that her membership of a trade union was discreet; her elder brother, John, had been a shoemaker, and although a union member, he had not been politically active. Nevertheless, the factory girl image won her a sizeable and devout following because, for many, her life had been real. People were drawn to her because she had experienced their suffering, and she was not intimidating. This may explain why she came to be more commonly referred to as Margaret Sinclair than by her religious name. She provided the Catholic church in Scotland with someone it could commend as an obedient and pious Scottish Catholic and feel comfortable promoting as a truly Scottish saint.