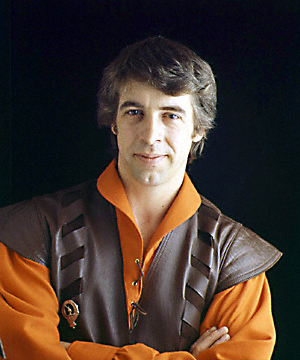 © by kind permission of Ronnie Browne

Williamson, Roy Murdoch Buchanan (1936–1990), musician and songwriter, was born at 4 Royal Circus, in Edinburgh's New Town, on 25 June 1936, the younger of the two sons of Archibald Moir Macrae Williamson (1899–1944), advocate, and his wife, (Agnes) Ethel Stewart Cumming (b. 1903). Originally from Haddington, East Lothian, Williamson's mother was a talented pianist who had acting aspirations as a young woman. His father came from Aberdeen, with farming roots further north in Morayshire. As an advocate Archie Williamson was highly regarded among Scottish legal circles, with colleagues convinced that he was destined for the bench (The Scotsman, 24 Nov 1944). Yet there was ultimately a contradiction between his professional and private life, as in 1944 he committed suicide by coal gas poisoning. The catalyst for this trauma was likely to have been marital difficulties.

For the eight-year-old Roy Williamson his father's sudden death and mother's subsequent breakdown initiated a period of profound dislocation. Equilibrium was restored to some extent when he was sent to boarding school: Wester Elchies and then Aberlour House, both preparatory schools for Gordonstoun, where he joined the senior school in September 1950. Gordonstoun was located in an estate at Duffus, Morayshire, which was family territory for Williamson; his paternal grandfather had been born there in 1867. A personal bond was thus established with the area, which strengthened as the years progressed. Gordonstoun's distinctive emphasis on physical as well as scholarly achievement also benefited Williamson, not least by mitigating the affects of chronic asthma. He showed particular proficiency on the rugby field as well as developing skills at seamanship, a key part of the Gordonstoun curriculum. His love of ships and sailing was to endure; asthma was said to have thwarted his ambitions for a naval career after leaving school in 1954 (Henderson, 209).

Instead Williamson turned to another of his talents when he enrolled at Edinburgh College of Art in 1955. With painted seascapes a speciality and a style later described as robustly 'no-nonsense' (The Scotsman, 30 Dec 1960), his four years at art school expanded his creative imagination. This related both to social and student activities, as from this time onwards he began to take music seriously. Although Williamson had scant formal training and never fully got to grips with reading music, as a child he had shown an intuitive ability to play certain instruments, while his mother had avidly attended orchestral concerts with her two sons in tow. Learning to play the guitar in the mid-1950s also owed much to trends in popular music. Like many of his generation he was beguiled by skiffle, a pared-down, rhythmic folk-blues genre whose best-known practitioners included the Glasgow-born Lonnie Donegan, Chas McDevitt, and Nancy Whiskey. Williamson's first forays as a public performer were therefore with an art school skiffle group.

During these early years Williamson absorbed an eclectic range of musical influences, including jazz, blues, and Spanish flamenco. From the United States singers like Burl Ives and Josh White contributed to his expanding repertoire. Significantly Edinburgh was a focal point for the folk-music revival, a phenomenon that had taken off during the post-war period on both sides of the Atlantic. In 1958 Hamish Henderson helped to set up the Edinburgh University Folk Club, its aim to disseminate traditional music and encourage new talent. Henderson, a researcher at the university's School of Scottish Studies, was widely regarded as 'the authority on traditional Scots music' (Neat, 127). Williamson began to cultivate this indefatigable collector of folk-songs, notably ballads. At the same time he was exposed to Scottish and Irish music through his friendship with Bill Smith, a contemporary at Edinburgh College of Art. Smith, whose family performed ceilidh and other dance band music, helped Williamson to refine his guitar skills.

Other important relationships were established at art school, not necessarily in the musical sphere. Ronnie Browne was a fellow student whose connection with Williamson initially revolved around a shared passion for rugby; the former played for Boroughmuir, the latter for Edinburgh Wanderers. Williamson also met and married his first wife when they were both still students. Violet Isabella (Vi) Thomson (b. 1935) was the eldest daughter of Willie Thomson, a British Railways ticket inspector. The wedding, on 25 March 1958, was not attended by Ethel Williamson, revealing the distant emotional attachment between mother and son. Roy and Vi Williamson went on to have two daughters, Karen and Sheena, and the family continued to live in Edinburgh. In order to qualify as an art teacher Williamson attended the city's Moray House College of Education over the 1959–60 session. Ronnie Browne embarked on the same course, and the two consolidated their friendship.

The idea of forming a folk group, to be called the Corrie Voices, originated around 1961 with Bill Smith. Although Williamson and Browne were not part of Smith's first line-up, by the 1962 Edinburgh Festival he had recruited them to the renamed Corrie Folk Trio and Paddie Bell. Inspiration came from the thriving Irish folk music scene, dominated at that time by the internationally successful quartet of the Clancy Brothers and Tommy Makem. Conviviality and the landscape were enshrined in the new Corrie brand; the name derived from the Scottish Gaelic coire, which meant both a cooking pot and a hollow in a hill. Smith and Williamson provided vocals and guitar accompaniment, Browne's tenor voice rounded out the harmonies, while Belfast-born Paddie (Patricia) Bell added 'a haunting, song-bird quality' to the ensemble (The Scotsman, 9 Aug 2005). Their repertoire embraced a range of material, from rumbustious drinking songs and sea shanties to traditional ballads from the highlands, lowlands, and Ireland. Quickly recognized as charismatic performers, the Corrie Folk Trio and Paddie Bell began recording in 1963. Popular demand was such that Williamson left his day job as an art teacher at Edinburgh's Liberton High School and became a full-time musician.

Although the group remained intact for little over three years, during this period they retained a high public profile thanks to a resident slot in the BBC's weekly television series The Hoot'nanny Show. However, in 1965 Paddie Bell left to have a baby and on new year's day 1966 Bill Smith literally walked away from the group after a bitter disagreement with Williamson and Browne. At least one subsequent attempt was made to resurrect the Corrie Folk Trio, but the reconciliation failed and Williamson and Browne went on to forge a distinctive identity as the Corries. Their contrasting abilities and personalities helped to sustain this new direction, as Browne was especially shrewd in dealing with bookings, finance, and promotion, while Williamson built up the Corries' musical credentials. To define their image the duo created a flamboyant performing alter ego; one music critic summed them up as 'Rob Roy figures in wide-sleeved shirts' (Stevenson, The Listener, 25 Sept 1969). While not to the taste of many folk purists, the sartorial style made the Corries immediately recognizable, and helped Williamson and Browne to compartmentalize their private and public lives.

During the 1960s Williamson developed into an accomplished multi-instrumentalist, eventually mastering the bodhran, concertina, flute, tin whistle, Northumbrian pipes, and a range of stringed instruments. Indeed, in 1969 a fascination with the potential of strings had stimulated his inventiveness. Over the summer of that year he designed and constructed two ‘combolins’, beautifully crafted hybrid instruments resembling oversized lutes or mandolins. Given their first commercial airing on the 1970 album Strings and Things, the intricate combolins added a novel dimension to the Corries' sound. The musicianship, together with a striking stage presence and solid television exposure, created a devoted fan base. This extended beyond Scotland, with the duo's first North American tour taking place in 1971. As the decade progressed they established a schedule of twice-yearly concert tours, organized under their own management. Control extended into recording, with the Corries Music Limited acquiring studios in Edinburgh. Their first album on the company's Dara/Pan-Audio label, a live concert, was released in 1974.

Although traditional Scottish music remained the mainstay of their repertoire Williamson increasingly turned his energies to composition. He collaborated with the lyricist George Weir to produce songs with historic themes, such as 'Liberty' and 'The Black Douglas'. However, he was wholly responsible for the song that generated the most enthusiastic audience response at Corries' concerts, 'The Flower of Scotland'. According to Williamson's daughter Karen, a draft had been composed as early as 1964 (Williamson, 64). The final polished version was first performed in 1967, eventually appearing on a 1969 live concert album. Invariably known as 'Flower of Scotland', the song's popularity directly paralleled the rise in electoral fortunes of the Scottish National Party (SNP). While Williamson's original sentiments were more patriotic than overtly political, his rousing rallying call for renewed nationhood struck a chord with SNP activists. That Williamson and Browne were unswerving SNP supporters reinforced the widespread view during the 1970s that the song was a party anthem.

What ultimately directed 'Flower of Scotland' towards mainstream acceptance was its adoption by Scotland's rugby team. The 'flower' of the title referred to combatants who had fought against the English in the Scottish wars of independence, an allusion that Williamson had taken from the ballad tradition. Modern rugby 'warriors' identified with those distant heroes who against the odds had overcome a formidable adversary. Crucially for the rugby fraternity, the simplicity of Williamson's lyrics, which some critics attacked as crude, made 'Flower of Scotland' easy to remember. The song's moment came in 1990 when the Scottish Rugby Union was forced to seek a new official anthem, to quell crowd hostility when 'God Save the Queen' was played at home internationals. Public demand for something unequivocally Scottish prompted the Scottish Rugby Union to take the bold step of opting for 'Flower of Scotland'. Scotland's celebrated victory that year over England at Murrayfield, which secured the grand slam in the five nations' tournament, seemed to vindicate the choice.

Tragically the song's breakthrough came as Williamson was dying from cancer, brought on by a malignant brain tumour. The diagnosis was all the more shocking because he had seemed ageless, retaining the athletic good looks of his early years. And his decline was sudden, as the Corries were still performing together in 1989, recognized by this time as not just musicians but ‘folk entertainers’, a term coined by Browne. There was irony here, as the contrast between Williamson's outgoing stage persona and reserved private life had become marked. From 1981 he was living in the relative seclusion of Forres in Morayshire, where he reignited his interests in painting and sailing. Divorced in the early 1970s, he was accompanied north by his new partner, Nicolette Maria (Nicky) van Hurck, whom he eventually married in 1990. Not long after the wedding he died at his Forres home, Mayfield, on 12 August 1990. His funeral, which was private, took place at Mortonhall crematorium in Edinburgh.

In an appreciation his early mentor Hamish Henderson countered criticism that the Corries' style was 'more music hall than folk song', arguing that the music hall was an honourable part of the Scottish folk tradition (Henderson, 209). Implicit in these remarks was the divided opinion about the merits of 'Flower of Scotland'. Yet the song's momentum during the 1990s showed no sign of slowing down. It became the definitive Scottish sporting anthem, embraced by the national football team in 1997 and Team Scotland in the 2010 Commonwealth games. In the debate about choosing an official national anthem, which took off when the Scottish parliament opened in 1999, 'Flower of Scotland' remains one of the leading contenders.