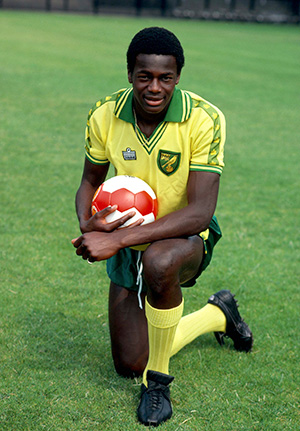 Fashanu, Justinus Soni [Justin] (1961–1998), footballer, was born at Hackney Hospital, London, on 19 February 1961, the son of Patrick Ayo Fashanu, a Nigerian law student, and his wife, Pearl Ophelia, née Lawrence, a nurse from British Guiana. At the time of his birth his parents lived at 3 Shellgrove Road, Stoke Newington. He was one of four children (Justin, his younger brother John, and their half-brother Philip and half-sister Dawn) who were eventually placed in care when their mother's relationship with Patrick Fashanu ended. Justin and John spent time in a Dr Barnardo's children's home before being fostered in the summer of 1965 by Betty and Alf Jackson, Londoners then domiciled in Attleborough, Norfolk.

As an adolescent, Fashanu's first love was boxing. Unable to apply for a professional licence until he was seventeen, at sixteen—working briefly as steel erector—he accepted an offer of a football apprenticeship from Norwich City after starring in schoolboy soccer, intending to use it as a temporary fitness platform for a career in the ring. He was later self-deprecatory about his football skills: 'The reason I became a footballer was simple: I could run faster than anybody else, that's about it. I didn't have any skill whatsoever, but I could run with the ball and hold it' (Cashmore, 57). The tall, teenaged Fashanu soon punched his way into the first team. If the dream of a boxing career had been subsumed by the reality of success on the football pitch, his muscular, lion-hearted style represented the nearest there was to a fusion of the two sports.

Fashanu literally shot his way into football's national consciousness when he won Match of the Day's ‘goal of the season’ in 1980, for a spectacular goal against Liverpool. An England Under-21 call-up came the same year, and he went on to make eleven appearances for the England Under-21 team, scoring five goals. After ninety appearances and thirty-five goals for Norwich, a move to Nottingham Forest, as the first black footballer to command a £1 million transfer fee, followed in 1981. However, Forest manager Brian Clough soon expressed a lack of confidence in the twenty-year-old; Fashanu's biographer believes Clough may have been influenced by persistent rumours of Fashanu's alleged frequent presence at a Nottingham gay club. This seriously affected his form. An average of a goal nearly every other game at Norwich was reduced to one in ten (three goals in thirty-two appearances) at Forest. Banned from the training ground by Clough, he once tried to take part, resulting in Clough calling the police to eject him. Clough later admitted, 'I should have dealt with Fashanu differently, certainly with a little more compassion and understanding' (Read, 76). After being loaned out, eventually rivals Notts County paid £150,000 for him. His goal average improved dramatically to nearly one in three (twenty goals in sixty-four appearances). It was at this time that he became a born-again Christian. He also became engaged, while rumours of his homosexuality continued in the press and football industry. Following his three seasons (1982–5) at County and two (1985–7) at Brighton and Hove Albion came an unsettled meandering that took him around England, Scotland, Australia, the USA, Canada, Sweden, and New Zealand: a search for form and consistency with the hope that, on return, some kind of general stability would also result. It never happened.

In 1990 Fashanu announced publicly via a tabloid newspaper interview that he was gay. This created a rift with his brother John, now also a professional footballer, who felt his openness would affect his career detrimentally: 'No football club will touch him now' (Read, 115). While John Fashanu's prediction was not accurate—his brother's football career continued for another seven years, including two years (1991–3) at Torquay United, for whom he scored fifteen goals in forty-one appearances—his prediction of an intolerant, hostile reaction from the football industry had an element of truth. It was a brave highlight in a tumultuous career that promised much more than was delivered.

In 1994 Fashanu (then playing for Heart of Midlothian) was the subject of much tabloid attention when he tried to sell stories of sexual liaisons with a married Conservative MP (allegations which he subsequently retracted). Sacked by Heart of Midlothian, he spent two years playing for Atlanta Ruckus in the USA and one season playing for Miramar Rangers in New Zealand before announcing his retirement from the game. In 1997 he moved to Ellicott City, Maryland, to coach Maryland Mania, a newly established team. In March 1998 a seventeen-year-old claimed to police in Maryland that he had been sexually assaulted by Fashanu. Fashanu, who admitted having sexual relations with the young man but always claimed that the sex was consensual, was questioned by the police but not formally charged. Nevertheless he fled to England, fearing that he was the target of blackmail. On 2 May 1998 he hanged himself in a lock-up garage he had broken into, in Fairchild Place, Shoreditch, leaving a note protesting his innocence of any charge of assault. At his inquest, it was revealed that the Maryland police had already dropped the investigation, owing to a lack of evidence. Sadly, Fashanu's courage as Britain's first openly gay male British professional footballer (which was still the case at the time of his death) had not led to a more sexually tolerant environment in male professional football in the UK. In 2009 a football team, the Justin Fashanu All-Stars, was formed in his honour in Brighton.