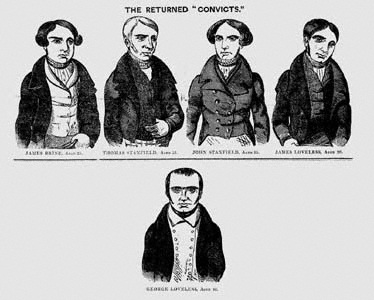 Tolpuddle Martyrs (act. 1834–c. 1845), agricultural labourers and trade unionists from the village of Tolpuddle in Dorset, became famous as victims of injustice, whose sentences of transportation caused a public outcry in 1834.

Arrested in Tolpuddle on the morning of 24 February 1834 the men were marched in chains to Dorchester on charges of being present at an initiation ceremony where illegal oaths were administered during a meeting of a friendly society of agricultural labourers. This trade union had been formed in 1833, largely on George Loveless's initiative, in an attempt to resist wage cuts by local farmers. Evidence against the trade unionists was gathered by a spy who attended a meeting of the society in Thomas Standfield's cottage in December 1833, and the six men were made an example of to deter the further spread of union activity in the area. James Hammett was not present on the occasion in question, and seems to have been arrested in place of his brother John. The family connections within the group were such that one woman in the village, Diana Standfield, was wife of one of those arrested (Thomas Standfield), mother of another (John Standfield), and a sister of two of the others (the brothers George and James Loveless). Brine and Hammett were Anglicans, but the other four martyrs were all Methodists. George and James Loveless were local preachers, and George believed that he had been victimized as much for his Methodism as for his trade unionism.

The men were held in Dorchester gaol until the opening of the spring assizes, and were tried in the county court at Dorchester on 17 March 1834, where the jury found them guilty; they were subsequently sentenced to transportation for seven years. After their conviction, the group was split up: George Loveless was taken ill and moved to a prison hospital, while the others were transferred to Portsmouth, and thence to Plymouth, before setting sail for Australia on 11 April. After four months at sea, they reached Sydney in August 1834, and were assigned as convict labour to various employers in New South Wales, walking long distances to reach the farms where they were to work. Meanwhile, George Loveless was finally judged well enough to travel in early April, and was kept in a prison hulk at Portsmouth for six weeks before boarding a ship bound for Van Diemen's Land, where he landed on 4 September and was put to work on a government farm.

In England, agitation against the sentences began almost as soon as they were pronounced, and the outcry over the injustice of the case won the support of high-profile radical figures, including Daniel O'Connell, Fergus O'Connor, and William Cobbett. Less than a month after the trial the men were already being referred to as 'martyrs'. Petitions and demonstrations were organized, notably a mass gathering at Copenhagen Fields, from where thousands of protesters marched peacefully across London to Whitehall. Under the pressure of this campaign, the home secretary, Lord John Russell, granted the men conditional pardons in June 1835, followed by full pardons in March 1836. News of the full pardons reached Sydney at the end of August 1836, but the men were not informed directly and found out about them only by chance, remaining in assigned labour long after they should have been freed. George Loveless obtained a free passage at the end of January 1837, and was the first of the martyrs to return to England. He had already been back in England for two months by the time his brother, James Brine, and the two Standfields left Sydney in September, finally reaching Plymouth in March 1838, two full years after they had been granted free pardons. James Hammett remained in Australia until March 1839, having been on an assault charge when the others left Sydney; he was thus the last to return to England, in August 1839.

The men were greeted with heroes' receptions on their return, attending processions, public dinners, and speaker meetings. A committee had been formed to support the men's families in their absence, and the London Dorchester Committee continued to raise funds to help establish the martyrs on farms of their own. In September 1837 George Loveless published a pamphlet, The Victims of Whiggery, which became an important text at Chartist meetings. Following the success of The Victims of Whiggery, the Dorchester Committee brought out A narrative of the sufferings of Jas. Loveless, Jas. Brine, and Thomas and John Standfield … displaying the horrors of transportation, written by themselves, which was published in 1838, with the profits going towards the fund.

The Dorchester Committee raised enough money to obtain leaseholds on two farms in Essex, at Tilegate Green and Greensted, and the families moved there in August 1838, though their infamy assured them an unfriendly welcome from much of the local community. None of the men seems to have had much record of radical politics before the arrests, but following their return to England they took more political stances, establishing a Chartist association in Greensted, meetings of which were held in the Lovelesses' home, and which were the subject of complaints to the magistrate. The martyrs remained in Essex for several years, during which time the family connections were strengthened. James Brine married Thomas Standfield's daughter Elizabeth (1818–1906) at Greensted parish church on 20 June 1839. When Hammett at last arrived back in England, he and his wife and son moved to the Greensted farm, though in 1841 they returned to settle in Tolpuddle, where Hammett took up work in the building trade.

In the mid-1840s the remaining five martyrs and their families emigrated to the province of Ontario, Canada, escaping the prejudice which they had encountered in Essex. The Brines left England in 1844, and began farming in Huron county. The Lovelesses settled near London, where George Loveless took out a mortgage on a farm of 100 acres and his brother James became the sexton of North Street Methodist Church. George Loveless later moved to another farm in Siloam and helped to build the Methodist church there. The Standfields emigrated in 1846 and also settled in London township. John Standfield, who had married Elizabeth Thurgood (1821–1883), daughter of John Thurgood, farmer, at Southwark on 4 July 1841, built a home called Dorset Hall and had a successful career as a storekeeper and hotelier, holding local public office and establishing a choir. In their new lives in Canada the men were determined to make a fresh start, and the story of their transportation remained a secret which they kept even from their younger children.

All five men survived into old age, and all except James Loveless owned land in Canada. Thomas Standfield spent his later years living with his daughter Elizabeth, and died at Middlesex, Ontario, on 18 February 1864. James Loveless had three children, was widowed and later remarried, and died at Siloam, Ontario, on 16 February 1873 and was buried in the Methodist cemetery there. George Loveless died in 1874, six years after the death of his wife; they had five children. The couples Thomas and Diana Standfield and George and Betsy Loveless were buried in adjoining plots in Siloam cemetery. John Standfield died at London East, Ontario, on 28 September 1898, at the age of eighty-five, surviving his wife who had died fifteen years before; the couple had seven children, and were buried at Mount Pleasant cemetery in London, Ontario. The last survivor of the group was James Brine, who died at Blanshard township, Perth county, Ontario, on 11 August 1902. He had eleven children, eight of whom were born in Canada. He was buried in St Mary's cemetery in Blanshard township.

James Hammett, the only one of the martyrs to return to Tolpuddle, was widowed three times. After the death of his first wife, he married second, in Tolpuddle on 6 September 1862, Charlotte (1832–1870), daughter of William Daniel, labourer. They had a daughter who died in infancy and a son. He married third, at Dorchester on 11 September 1875, a widow, Ann Frampton (1816/17–1877), daughter of Joseph Green, carpenter. She predeceased him. In 1875 he found himself briefly in the limelight once more, when the National Agricultural Labourers' Union presented him with an illuminated address and a gold watch to commemorate his service to the cause of trade unionism. His final years were less happy, as his sight deteriorated, and he chose to go into the workhouse at Fordington, Dorchester, so as not to be a burden on his family. He died there, of cerebral softening, on 21 November 1891, and was buried in the churchyard at Tolpuddle, where a headstone engraved by Eric Gill was erected in 1934.

The case of the Dorchester Labourers, who in the early twentieth century were increasingly referred to as the Tolpuddle Martyrs, acquired an important place in the mythology of the trade-union movement, within Britain and on an international level. There were various schemes to commemorate the episode from the early years of the twentieth century onwards. Memorials were erected in Tolpuddle itself in the form of an arch outside the Methodist church (1912), a commemorative seat (1934), and a row of six cottages for retired agricultural workers, built and maintained by the Trades Union Congress (TUC) and each bearing the name of one of the martyrs (1934). A Labor Memorial Park was dedicated to the memory of the martyrs in London, Ontario, in 1969. The men's story was dramatized on stage and on radio in the 1930s, and the TUC organized a major commemoration in 1934 for the hundredth anniversary of the trial. The labour movement in Britain has held annual rallies in Tolpuddle since 1934 to celebrate these most famous of its early pioneers, who are also commemorated in a museum in the village.