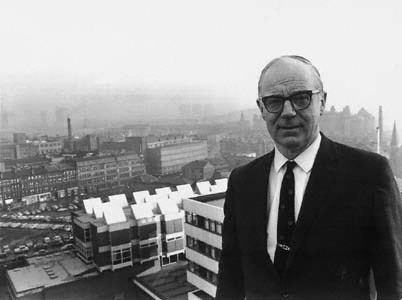 Curran, Sir Samuel Crowe [Sam] (1912–1998), physicist and university administrator, was born in Ballymena, co. Antrim, on 23 May 1912, the second of four sons of John Curran (1885–1959), a steelworks foreman, and his wife, Sarah Owens, née Crowe (1886–1968). His mother had gone to her ancestral home a few weeks before his birth so that he could be born in Northern Ireland. Soon afterwards she returned with him to her husband and family in Wishaw, Lanarkshire, where Sam spent the remainder of his childhood and youth. He was essentially, in both speech and outlook, a west of Scotland man.

In 1929, after attending Wishaw high school, Curran entered Glasgow University, where he gained first class honours in mathematics and natural philosophy. He joined the physics department as a PhD research student in 1934, proposing to work on the diffraction of beta rays of radium. He found that he had to modify and reconstruct Geiger counters which had long lain idle, and he showed how versatile Geiger counters were when associated with a good pulse amplifier. It was in this field that he later made a major impact. After completing his Glasgow thesis, 'Diffraction of beta rays by thin films', in 1937, he moved to St John's College, Cambridge, to study for a further PhD. At the Cavendish Laboratory (where there was a new 1 million volt particle accelerator) he introduced his improved Geiger counters, and also explored new methods of proportional counting. One of his assistants, studying for her PhD in physics, was his future wife, Joan Strothers [Joan Elizabeth Curran Lady Curran (1916–1999)], daughter of Charles William Strothers, an optician, and his wife, Margaret Beatrice, née Millington. Joan was born in Swansea on 26 February 1916, and was educated at Swansea Girls' High School before entering Newnham College, Cambridge, with an open scholarship in 1934. Encouraged by her Newnham tutor A. C. Davies, she joined the Cavendish Laboratory after graduation in 1937. It was said of her that 'she had the scientific equivalent of gardening green fingers', and 'had the reputation of extreme dexterity and being outstandingly neat and skilful in the deployment of equipment' (Independent, 19 Feb 1999).

On 1 September 1939 Curran's and Strothers's supervisor, Philip Dee, took his team to spend a month at the Royal Aircraft Establishment, Farnborough. Two days later war with Germany was declared. They never returned to the Cavendish; instead, they moved to Exeter, where Curran and Strothers joined a small team developing the proximity fuse, based on transport-receive miniature radio. This was later an important weapon in destroying enemy planes, and was largely responsible for the destruction of over ninety per cent of the V1 flying bombs launched against southern England in 1944. From Exeter Curran and Strothers—who married on 7 December 1940—moved to join Dee, Bernard Lovell, Alan Hodgkin, Herbert Skinner, Bill Burcham, and others at the Telecommunications Research Establishment at Leeson House, Langton Matravers, in the development of centimetre radar for installation in aircraft. Curran had worked on pulse amplifiers before the war and with the development of a spark plug modulator devised by him, he was soon handling 50 kilowatts of pulse power at repetition rates of over 2000 per second. Curran (with Hodgkin and Burcham) was responsible for the detailed contacts with firms manufacturing the radar system. Soon all aircraft were being fitted with it. It was used in night fighters; it enabled bombers to carry out precision targeting; and it became a vital factor in enhancing the ability of planes to protect merchant shipping from U-boat attack, and thus played a large part in winning the battle of the Atlantic. Meanwhile Joan Curran, as part of the countermeasures group in an adjoining laboratory, was cutting up strips of tinfoil and developing the idea which led to operation Window, the scattering of clouds of these strips as a way of misleading enemy radar. From 1942, Bomber Command regularly employed this deception in order to provide the equivalent of radar smoke screens. Perhaps its greatest success came on D-day, 6 June 1944, when clouds of foil dropped by bombers of 617 squadron simulated an invasion force of ships heading towards the Pas de Calais, and persuaded the Germans to concentrate vital forces there rather than in Normandy.

Early in 1944 Curran, accompanied by his wife, was transferred to the University of California, Berkeley, to work under the direction of Ernest Lawrence on the separation of isotopes of uranium as an important part of the Manhattan project (the development of the atomic bomb). While there, in his spare time, Curran invented the scintillation counter for the detection and counting of radiation sources. This was later used in almost every scientific laboratory in the world, though Curran made no monetary gain from it. It was during their stay at Berkeley that the Currans' eldest child and only daughter, Sheena, was born, severely mentally handicapped. They also had three sons, each of whom went on to complete a PhD.

After the war, Curran joined the staff of Glasgow University, where Philip Dee was now professor of natural philosophy. During this period he invented a proportional counter to measure a number of different radiations. He was elected a fellow of the Royal Society in 1953. In March 1955 he was invited to join Sir William Penney at the Atomic Weapons Research Establishment, Aldermaston, to help develop a hydrogen bomb for Britain, a project completed by 1957. In all, Curran spent four and a half very successful years at Aldermaston, and represented the UK Atomic Energy Authority in highly technical visits to Berkeley, Livermore, Los Angeles, Oak Ridge, and other major US and European centres.

In 1959 Curran was invited to become principal of the prestigious Royal College of Science and Technology (RCST) in Glasgow, and to steer it through to university status. He readily accepted. He was keen to continue and expand the college's tradition of useful learning, and in the process to create a completely new kind of university. He pointed out to Sir Keith Murray (chairman of the University Grants Committee) that in 1960 the RCST was producing more than ten per cent of all the graduates with university-level technology qualifications in the United Kingdom, and more graduates in technology than all four Scottish universities put together. In the spring of 1961 Murray informed Curran that his committee had reached the unanimous conclusion that they should recommend to government that the RCST should merge with the Scottish College of Commerce to become a university. In March 1962 a statement was made to this effect in the House of Commons, and Murray agreed to Curran's suggestion that the new university should be named Strathclyde, after the ancient Scottish kingdom. Thus the University of Strathclyde, with Curran as its first principal and vice-chancellor, the first new university in Scotland for 381 years and the first technological university in Britain, came into being. Lord Todd of Trumpington, a distinguished scientist and Nobel laureate, and himself a native of Glasgow, was appointed chancellor.

In order to maintain a suitable balance, Curran resolved that the ratio of science and technology students to arts and business students should be maintained at two to one. He blamed much of the industrial and manufacturing decay in the UK on the failure of governments and universities to recognize the importance of technological education at the highest level. He was adamant about the role that his university should play: it would be, as John Anderson, the founder of the college, had envisaged some 170 years previously, 'a place of useful learning'. Curran also insisted that it should be located, as the Royal College had been, in the heart of industrial Glasgow. Expansion on a massive scale was necessary. By the time Curran retired in 1980, more than twenty major buildings, including accommodation for 1220 students out of a total student population of 6700, had been erected on about 24 acres of the city centre. Student playing fields covering about 270 acres were laid out a few miles from the city, and a staff recreational centre of 50 acres was established, including Ross Priory, a magnificent house on the banks of Loch Lomond. Its walled garden was named in Joan Curran's honour and a summer house was later erected in her memory.

Remembering his wartime days, Curran set in train co-operation with industry at a time when it was not fashionable for universities to do so. He encouraged departments to appoint visiting professors from industry and he appointed top industrialists (as well as academics and students) to the university court. With the help of Anthony Wedgwood Benn, the energy minister, he built, in 1966, a Centre for Industrial Innovation, a forerunner of science parks, where academics and industrialists could co-operate in fruitful research. He encouraged members of staff to accept consultancies in industry, and he also encouraged departments to appoint promising members of staff to personal professorships. Only later did such things become commonplace.

Curran could also be outward-looking. With the increasing interest in teaching and research in the nuclear field, he chaired a committee of the Scottish universities which persuaded the Department of Scientific and Industrial Research to provide a 100 kW reactor (later upgraded to 300 kW) at the national engineering laboratory, East Kilbride, together with associated staff, buildings, equipment, and running costs for the first five years. This facility was available to all the Scottish universities (and later Queen's University of Belfast was also included). In 1966 he established a close academic link between Strathclyde and the technical University of Łódź, Poland. This was at a time when Poland was part of the Soviet bloc and communication between the people of Poland and of the UK was difficult. The initiative was enormously successful, leading to a two-way exchange of students and staff, to shared degrees, and to close and lasting friendships. Curran was appointed commander of the order of Polonia Restituta by the Polish government in 1976.

Two things especially angered Curran: the very low salaries paid to scientists by comparison with businessmen, and the failure to recognize how science and technology had helped to win the Second World War. As he pointed out, there were no scientists in the parades to mark the fiftieth anniversaries of VE-day and VJ-day, yet it was the discoveries and developments by scientists and engineers—radar, the proximity fuse, operation Window, and the atomic and hydrogen bombs, to mention only a few—that made victory possible.

Curran served on innumerable government, public, and private bodies influencing science policy throughout the country, chaired the advisory committee on medical research (1962–75), and was chief scientific adviser to the secretary of state for Scotland (1967–77). He was knighted in 1970. He received many honorary degrees—including, on his retirement, the first fellowship of the university that he had founded. Joan Curran also received an honorary doctorate of laws from the university in her own right, in 1987. The Curran building, housing various departments of the University of Strathclyde, was named after them. Curran's main recreations were clock making (he had a number of patents) and golf. He was very proud of having published an article on 'The physics of the golf swing' in Business Scotland.

After the birth of their daughter Sheena, the Currans threw themselves into work for the disabled, and continued to do so until their deaths. In 1954 they helped to organize the public meeting which led to the foundation of the Scottish Association of Parents of Handicapped Children (later the Scottish Society for the Mentally Handicapped, and later still ENABLE), which by the time of their deaths had more than 5000 members and over seventy branches across Scotland. Curran served as president of the organization from 1954 until 1991. In 1964 the Glasgow branch named its office and leisure facilities Curran House in his honour.

Sam Curran died of cardiorespiratory arrest at the Nuffield McAlpine Hospital, Glasgow, on 25 February 1998, a few days after a prostate operation. His wife Joan died in Glasgow of cancer on 10 February 1999. They were both cremated at Daldowie crematorium, Glasgow, and were survived by their daughter and three sons.

Close
(1920–)
Biographical Memoirs of Fellows of the Royal Society