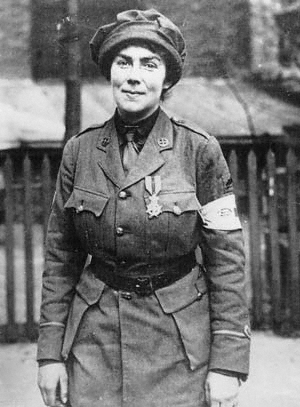 Thompson, Muriel Annie (1875–1939), volunteer ambulance driver and member of the FANY, was born on 10 June 1875 at 17 Albyn Place, Aberdeen, the fifth of the eight children of Cornelius Thompson (1843–1894), shipowner and marine architect, and the only daughter of his second marriage, to Agnes Marion Williamson (1846–1926). Her grandfather was George Thompson junior (1804–1895), laird of Pitmeddon, deputy lieutenant of Aberdeenshire, provost of Aberdeen, member of parliament for Aberdeen (1852), and founder of the George Thompson Shipping Company, later the Aberdeen White Star Line. She was educated at Blackheath high school and Hacking College, north London. After the death of her father she lived with her mother at 48 Queensgate, London.

Muriel and her two full brothers, Walter and Oscar, were early and keen motor vehicle drivers. They were involved in the foundation of the Brooklands Automobile Racing Club, and on 4 July 1908 Muriel Thompson won the Ladies Bracelet Handicap at Brooklands, the first race held there for women drivers. She was driving Oscar's Austin racing car, nicknamed Pobble. Her speed over 3 miles was 50 m.p.h.

At the outbreak of the First World War Oscar joined one of the several volunteer ambulance convoys raised to help the French, taking Pobble, splendidly converted into an ambulance, with him. Women were not welcomed so Thompson turned to the First Aid Nursing Yeomanry corps (FANY). This was founded in 1907 by a former cavalry sergeant-major, Edward Baker, as an all-female mounted ambulance unit. By 1914 the FANY had moved to mechanized transport and on 27 October 1914 was the first women's organization to go to France. Their services having been firmly refused by the British authorities, they drove ambulances and ran hospitals and casualty clearing stations for the Belgian and French armies all along the western front. On 1 January 1916 British resistance was finally overcome and the members of FANY Calais convoy became the first women to drive officially for the British army.

Thompson joined the FANY as a driver in January 1915. On 8 February she crossed to Calais to a Belgian military hospital called Lamarck which the corps was running. On 29 March she was personally decorated by King Albert with the chevalier of the order of Leopold II for evacuating wounded Belgian soldiers under fire near Dixmude. She served as second in command to Lilian Franklin on the Calais convoy, and was mentioned in dispatches on 9 April 1917. On 1 January 1918 she was appointed officer commanding of a new joint FANY–VAD (Voluntary Aid Detachment) convoy based at St Omer near the front line. The St Omer convoy became officially part of the Second Army on 4 May, choosing a perky-looking red fish as its official insignia in memory of the surgeon-general's description of the corps in 1915, then in battle with British officialdom, as 'neither fish, flesh nor fowl … but damned good red herrings'.

During the prolonged German spring counter-offensive in 1918 the St Omer convoy worked day and night under heavy bombardment evacuating the dead and wounded. On 18 May they were called out following a bombing raid on Arques, including one on an ammunition dump. A second raid came over and, with shells exploding all around, they were ordered to take cover. The women worked on regardless, moving the injured to safety. For their coolness and courage under fire they were awarded a total of sixteen military medals and three Croix de Guerre. According to an unpublished memoir by Beryl Hutchinson, all the decorations were questioned, as there were too many for such a small unit; but each one was so strongly supported by the British and French officers on the scene that all were allowed. Muriel Thompson was decorated with her Military Medal in the field by the general officer commanding, Second Army, General Sir Herbert Plumer, and with her Croix de Guerre in the main square of St Omer by General de la Guiche. Her medals were subsequently given to the National Army Museum.

Muriel Thompson was a tall, dark-haired woman as evidenced by the photograph showing her towering over General de la Guiche as she received her medal. Handsome rather than beautiful, other photographs capture her looking out of the many cars she drove over the years, Pobble the Austin racing car, Flossie the Ford ambulance, and Kangaroo, her own Cadillac. Badly affected by the death at Passchendaele in 1917 of her nephew Logie Colin Leggatt, a lieutenant in the Coldstream Guards, and exhausted after nearly four years of continuous service, she returned to England on 2 September 1918. After a month's recuperation, she joined the Women's Royal Air Force as a recruiting officer. She was demobilized on 1 October 1919. She resigned from the FANY in 1922 in a policy disagreement over the corps' post-war role. Muriel Thompson, who never married, spent the next two decades at her London home, 30 The Grove, Boltons, Kensington, where she died on 3 March 1939 of encephalitis lethargica, an epidemic form of inflammation of the brain, of which there were several outbreaks between the wars. She was buried in Brompton cemetery, London.