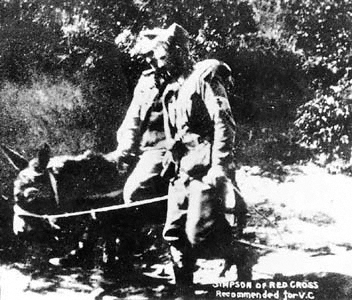 by unknown photographer, c. 1915 [in Shrapnel Gully, Gallipoli, with a wounded soldier on his donkey]

Kirkpatrick, John Simpson (1892–1915), war hero, was born at South Shields, co. Durham, on 6 July 1892, the son of Robert Kirkpatrick and his wife, Sarah Simpson. Robert Kirkpatrick was a merchant captain until in 1904 an accident ended his working life. His surviving children, one son baptized John Simpson and three daughters, were still young. Three other sons had died of scarlet fever. The boy attended two local state schools, Barnes Road School and Mortimer Road School in South Shields, but his surviving letters demonstrate that his education was severely limited. From the age of ten or eleven, John made some contribution to the family's small income. A surviving letter to his mother recalled an early escapade in which he had stolen a duck to add to the family's diet. He soon showed a gift for working with animals, first in helping with the riding donkeys on the local beach, and then with a horse-drawn milk cart.

In 1909, aged seventeen, Kirkpatrick joined a local Territorial Army unit, but when his father died in October the same year he decided to emigrate to Australia. Unable to afford a passage, he joined a Tyne-based coaster and then enlisted on another ship at Leith, intending to desert when she reached Australia. In July 1910 he jumped ship at Newcastle, New South Wales. To avoid legal consequences he dropped his surname and took the name John Simpson. For the next few years he had various jobs, working in a colliery and a cane field, but mostly employed in local shipping. Whenever he could he sent money home to support his mother and sisters. By 1914 he was homesick and when the First World War began he enlisted in the Australian Army Medical Corps in the belief that this would lead to his being posted to Britain. Instead, the 3rd Australian field ambulance was sent to Egypt and then, in April 1915, to Gallipoli. While his transport was moored at Mudros, Simpson broke into the ship's stores to obtain extra food.

As a medical orderly during the Gallipoli campaign, Simpson's main duty was to convey wounded soldiers (principally those suffering from leg wounds) from the immediate fighting area down to the field hospital in the area of the disembarkation beaches, often under enemy fire, along a route that included Sniper's Alley and Shrapnel Gully. Shortly after the landings he found a stray donkey in a nearby gully and appropriated it. For the next three weeks he continued his rescue work with the donkey, careless of danger and usually whistling cheerfully en route. On 19 May 1915 he was shot by a Turkish sniper, the donkey continuing on its way to the field hospital with its mortally wounded patient. He was buried on the beach at Hell Spit, Gallipoli.

Subsequently John Simpson Kirkpatrick became an important symbol of Anzac heroism at Gallipoli, his story much exploited for propaganda purposes during the First World War and even revived for similar purposes during the Vietnam war. He is much better known in Australia than in Britain, and Australian pride in his heroism is associated with resentment that it received such inadequate recognition—only a mention in dispatches—from the British military authorities. A modern monograph has discussed the mechanism whereby his last weeks acquired such significant and widespread symbolic importance in Australia. Attempts to argue that he was a convinced political radical and an enemy of imperialism, using some unsophisticated expressions attacking wealth and privilege in surviving letters, are less convincing (Cochrane). In Australia monuments to ‘the Man with the Donkey’ include a full-size bronze statue in the shrine of remembrance at Australia's national war memorial and other statues in at least five cities. A similar statue was erected in South Shields only in 1988, financed by public subscription after the local council refused any subsidy from public funds. Kirkpatrick also appears prominently in a memorial frieze at Gallipoli. In 1965 he was the centrepiece of three Australian postage stamps celebrating the fiftieth anniversary of the Gallipoli landings. Annual celebrations in Australia still commemorate his last heroic weeks.