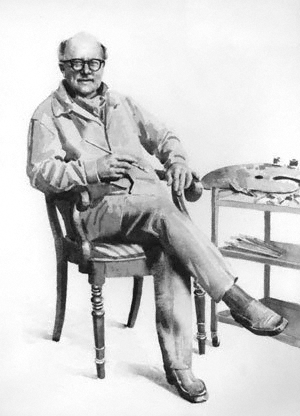 Gilroy, John Thomas Young (1898–1985), graphic artist and portrait painter, was born on 20 May 1898 at 4 Crawhall Terrace, Newcastle upon Tyne, the second son and the fourth of eight children of John William Gilroy, marine artist and technical draughtsman, and his wife, Elizabeth, née Young. He was educated in Newcastle at Sandyford School (1903–9), Heaton Park Road upper school (1909–12), and King Edward VII School, where he gained a scholarship to Armstrong College art school, Durham University. His studies were interrupted by war. In 1916 Gilroy enlisted in the Royal Field Artillery, serving in France and Palestine. He gained a scholarship in 1919 to the Royal College of Art (RCA) in London, where he won prizes for composition, decorative painting, and drawing; he received the board of education certificate in 1920, a travelling scholarship in mural painting in 1922, and graduated in the following year.

As a child Gilroy had copied cartoons from Punch and, aged fifteen, was employed as a caricaturist by the Newcastle Evening Chronicle. While at the RCA he produced commercial leaflets for the Hydraulic Engineering Co. After graduation he stayed on at the college as a teacher and between 1924 and 1926 taught figure drawing at Camberwell School of Art in south London. On 6 September 1924, at St Helen's Church, Kensington, he married Gwendoline Peri Short (b. 1902/3), a fellow student at the RCA; the couple had one son, John Morritt (b. 1927). In 1925 Gilroy joined the advertising agency S. H. Benson Ltd, with whom he remained before turning freelance in the late 1940s. He was soon working on major accounts, including Bovril and Colman's mustard.

In 1928 Bensons secured a contract with the Irish brewing firm Guinness, on which Gilroy was employed and on whose brand image he was to have a significant influence. His first known illustration for the company appeared in 1930, and depicted St George and the dragon fighting over a pint of the black stuff. Between 1930 and 1961 Gilroy was central to Guinness advertising, and his imaginative interpretations have become icons of British advertising. His designs were deceptively simple: the colours strong, the palette sparse, the type bold, the background white, and the elements balanced but dramatically positioned to convey the product's two related themes of strength and goodness. Gilroy's tools were humour and hyperbole. His outrageous scenarios, especially the girder-carrier sequence from the early 1930s—in which a Guinness-drinking workman transports metalwork with ease—defy belief, except in the essential brand promise. His approach mirrors that of John Hassall (1868–1948), whose poster art Gilroy would have studied at the RCA and with whom his work shares common elements: Hassall's Jolly Fisherman, the bouncing Skegness lifeboat man, for example, is recognizably a blood relation of Gilroy's Guinness characters. Like Hassall, he also knew the value of humour in advertising for its ability instantly to attract and involve. 'The man in the street has no time for contemplation. My posters are, therefore, a kind of aesthetic meal-in-a-minute' (Gilroy, quoted in Guinness Time, 14). Gilroy too worked quickly, whether at a desk, in a studio, or at London Zoo, and was never without pencil, pad, or the back of an envelope to capture a particular image. Topicality was likewise a hallmark of his Guinness advertising. When Waterloo Bridge was rebuilt in 1934, Gilroy depicted the old structure being demolished by a Guinness-drinking workman who returned in 1945 to help lift the Eros statue (moved during wartime) back into place in Piccadilly Circus. Gilroy's Guinness work was also an object lesson in the integration of word and image, the first being never a mere caption to the second. He possessed an excellent understanding of branding, and his designs gave prominence to the product name, usually as part of the slogan ('Guinness for strength' and 'My Goodness. My Guinness'). In addition to Guinness, Gilroy's designs for more than forty clients from the late 1920s seldom failed to identify the product. Examples include his work for Colman's mustard, for which he designed the cover of a recipe book in 1928 and worked (with Dorothy L. Sayers as copywriter) on the 'Mustard Club' campaign between 1926 and 1933. His poster for Rowntree's Clear Gums (c.1928) features a cartoon character made of fruit, holding a giant pack from which the gums fly out, while designs for the Empire Tea Bureau (1936–9) depict the drink's popularity and worth among a diverse population: in one image, for instance, a factory worker delights to see a cup of tea approaching him on a conveyor belt with the slogan 'Tea revives you'.

But equally important to brand association was Gilroy's consistency and instantly recognizable style of execution. It was this which allowed him to omit any representation of the product or its name in Guinness's coronation poster (1953) which, in familiar style, featured a jolly zoo-keeper holding up a bench of animals (the by now popular and well-known sea-lion, ostrich, kangaroo, and toucan). Again, there were parallels between Gilroy and his work. The zoo-keeper was a self-caricature and, as he stated in a late interview, 'I have always been a jolly man' who 'thought the Guinness campaign needed a touch of humour' (Mail on Sunday, 16 Dec 1984). It was a quality which Gilroy also brought, first, to his war-time work for the Ministry of Information—for which he contributed to the 'Dig for victory', 'Careless talk costs lives', and 'Make do and mend' campaigns—and, second, to the greetings card company, Royle Publications Ltd. Gilroy's association with Royles began in 1949. Over the next thirty-five years he produced more than 800 designs characterized by a combination of animation, jokiness, and incident which, unlike most of the genre, makes them worthy of a second look.

In addition to his design work, Gilroy also practised as a portrait painter throughout his adult life. He first exhibited at the Royal Institution of Oil Painters in 1928, and two years later exhibited at the Royal Academy in the first of twenty-one hangings in a long and prolific career which included a number of commissions for the royal family. Gilroy's first royal portrait was of the prince of Wales (the future Edward VIII) commissioned by the Royal Mid-Surrey golf club, of which the prince was patron and Gilroy a member. This was followed by portraits of the queen, the queen mother, the duke of Edinburgh, Princess Margaret, Princess Anne, Prince Charles, and Earl Mountbatten; the queen last sat for Gilroy when he was eighty-two. Other sitters included Pope John XXIII, the politicians Winston Churchill, Edward Heath, and Lord Hailsham, as well as the comedian Will Hay and the army officer Earl Alexander of Tunis, whose portraits are now in the National Portrait Gallery. A member of London's Garrick Club since 1955, Gilroy undertook to clean the club's portrait collection in 1969 and from the following year (until 1975) he chaired its works of art sub-committee. He also painted several fellow Garrick members, among them Sir Malcolm Sargent, Sir John Gielgud, and, in a finely observed study entitled The Fly Dresser (1958), Arthur Ransome. But he was happiest painting members en masse and animated. According to Geoffrey Wansell, nowhere is 'the bonhomie that lies at the heart of the Garrick better expressed than in John Gilroy's painting of the Club's outing to the Derby in June 1967' (Wansell, 126). Common elements in his portraiture are a liking for traditional techniques, an affection for his subjects, and the engagement of his sitters, whom he encouraged to talk to him: 'If you lose the animation you may as well get a photograph' (Jenkins).

Gilroy's third professional field was as an illustrator. In the early 1930s Guinness 'adopted' figures from Lewis Carroll's Alice books and Gilroy illustrated several parodies of well-known scenes that were used from 1933 as advertisements, posters on the London Underground, and in a series of illustrated booklets sent to members of the medical profession (and hence known as doctors' books) to secure endorsement of Guinness's supposed health-giving qualities. From 1932 to 1942 he contributed drawings and covers for the Radio Times, and between November 1943 and June 1944 created a series of fifty-two drawings-in-one-line of contemporary figures (among them Churchill, Montgomery, Eden, and Hitler) for the London evening paper The Star. Later commissions included a mural at the Morritt Alms, Greta Bridge, co. Durham, his Memorial to the Few at RAF Cranwell (1950), and illustrations for Hugh Maclennan's edited book McGill: the Story of a University (1960). Though always competent, Gilroy's landscape paintings—often of continental holiday destinations—were more of a hobby than a professional pursuit.

In 1922 Gilroy had been made an associate of the RCA, and fourteen years later he was elected a fellow of the Royal Society of Arts. He became a freeman of the City of London in 1981. His first marriage was dissolved in 1945 and on 26 August 1950 he married Elizabeth Margaret Outram Bramley, née Thwaite (b. 1914/15). From 1951 the couple lived at 10 Holland Park Road, London, the former house and studio of Sir Bernard Partridge (1861–1945), whose Punch cartoons Gilroy had copied as a boy. In 1979 John and Elizabeth moved to 6 Ryecroft Street, Fulham, London, where he continued to work, designing posters for the lord mayor's show in 1982 and 1983. John Gilroy died of motor neurone disease on 11 April 1985 in Guildford Hospital, and was cremated at Ampney St Peter, Gloucestershire. A memorial service was held at St Paul's, Covent Garden, London, on 20 May. Here was recalled the humour and fun which had enlivened the work of this energetic, versatile, and influential artist. He was survived by his son and his second wife.