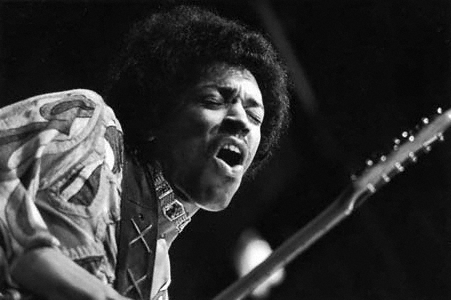 by unknown photographer, 1970 [at the Isle of Wight festival]

Hendrix, James Marshall [Jimi] (1942–1970), rock musician and songwriter, was born on 27 November 1942 at the King County Hospital (which became the Harborview Medical Center), Seattle, Washington, USA, the first child of James Allen Hendrix (b. 1919), landscape gardener, and his first wife, Lucille L. Jeter (1925–1958). He was originally named Johnny Allen Hendrix by his mother while his father was fighting in the Second World War, but the latter changed the child's name by affidavit on his return. Hendrix's parents separated and eventually divorced in December 1951.

The Seattle into which Hendrix was born was a racially mixed society, and Hendrix—who was of black, Mexican, and Cherokee heritage—never encountered racism until he enlisted in the US army in May 1961. He served in the 101st airborne division as a clerk, stationed in Fort Campbell, Kentucky, but was discharged on medical grounds in July 1962 after sustaining a broken ankle in a parachute jump. He had been given his first guitar by his father in June and belonged to many local Seattle bands during his teens; being left-handed, he played the instrument upside down. After leaving the army he toured (mainly in the southern states) as a backing musician for Little Richard, Ike and Tina Turner, the Isley brothers, Jackie Wilson, and Sam Cooke. In July 1964, having relocated to New York, he formed his own band, Jimmy James and the Blue Flames, who secured a residence at Café Wah in Greenwich Village. There he was spotted by Chas Chandler, bass player with the Animals, who recognized Hendrix's potential and convinced him to return with him to London.

The group arrived in London on 24 September 1966. Hendrix was initially refused entry to the country, but Chandler, who was now acting as his manager, eventually secured a temporary visitor's permit. Plans were immediately made to form a new band—the Jimi Hendrix Experience—featuring Noel Redding, formerly of the Lovin' Kind, on bass guitar and Mitch Mitchell, formerly with Georgie Fame's Blue Flames, on drums. The Experience embarked on a tour of France in October, which was used by Chandler to hone the group's act, though Jimi had already learned his stage tricks—playing the guitar behind his back, between his legs, or with his teeth—while touring in America. These became his visual trademarks, along with a guitar-smashing routine that began unintentionally at a show in Germany the following month.

The Experience recorded its first single, 'Hey Joe', in October 1966; the second, 'Purple Haze', recorded in the following January, became Hendrix's signature tune, with its lyrical references to drug culture and the experience of taking LSD. Both were top ten hits in the UK. After Hendrix was finally issued with a work permit, the band was at last able to tour the UK in early 1967. They achieved the status of an overnight sensation, aided by an ever more risqué, sexually provocative stage show. On occasions Hendrix would set his guitar on fire, which led the British press, with great racial insensitivity, to dub him 'the wild man of Borneo'.

Hendrix's first LP, Are you Experienced?, released in May 1967, showcased his extraordinary guitar-playing, and featured innovative studio techniques such as phasing and backwards guitar that gave this and subsequent recordings their distinctive sound. There was a raw quality to this record; his second LP, Axis Bold as Love, released in December, was more melodic and in tune with the psychedelic, drug-influenced music of the period. His lyrics had developed an outer-space connection—he sang of, among other subjects, UFOs—and his guitar virtuosity had become more polished and fluent. Hendrix had made Britain his home, but had to leave the country for a time in the summer of 1967 because his work permit expired. By the agency of Paul McCartney, the Experience made its American début at the Monterey festival, and made a successful two-month tour of the country. Another tour of the UK followed. The year 1968 saw the Experience play in Sweden, France, Italy, and Switzerland and another tour of America. In Britain Hendrix made a guest appearance in the Dusty Springfield show, in which he sang a duet of 'Mocking Bird' with the show's host.

In October 1968 the Experience released its third LP, Electric Ladyland. Again Hendrix courted controversy; the cover showed nineteen naked women, and many shops refused to display it. The music contained therein showed further developments in musical sophistication; the Hendrix composition '1983 a Merman I should Turn to Be' was compared to a sound painting. 'All Along the Watchtower', a Bob Dylan song which featured on the LP, became his only top twenty hit single in the USA. At this time Hendrix was based in London at 23 Brook Street, where he lived with his long-time British girlfriend Kathy Etchingham (b. 1946). The composer George Frideric Handel had lived next door at no. 25; the presence of a blue plaque commemorating this inspired Hendrix at the time, and he now has his own adjacent plaque, which was unveiled in September 1997.

Following two performances at the Royal Albert Hall in February 1969, the Experience again toured America. The group disbanded after a final performance at Denver in June, which ended in a riot. Hendrix then formed the short-lived Gypsy Sons and Rainbows, featuring Mitch Mitchell on drums and Billy Cox, an old army friend, on bass. They played at the historic Woodstock music and arts fair in August, and famously ended their set with an immense (and provocative) version of the 'Star-Spangled Banner'. In November Hendrix formed an all-black group, the Band of Gypsies, featuring Billy Cox and Buddy Miles on drums. After a handful of concerts and some recording sessions (an album was issued in early 1970), they too disbanded. Much of Hendrix's energy at this time went into private jam sessions with jazz musicians such as John McLaughlin, and it is clear that he was aiming to develop his own brand of fusion music.

Hendrix's new group, The Cry of Love (with Billy Cox and Mitch Mitchell), made its début in Los Angeles in April 1970, and played at the Isle of Wight pop festival in August. European gigs followed, but with the constant rigours of travelling and little sleep Hendrix collapsed on stage at Aarhus, in Denmark. He recovered enough to continue the tour, but his appearance at the Love and Peace festival in Germany on 6 September was, tragically, his last full performance. Back in London, he attended Ronnie Scott's jazz club to see former Animal Eric Burdon's new group, War, on 16 September. He was persuaded to join the group on stage for the final two songs, the last time he played in public. On 18 September an ambulance crew was called to the Samarkand Hotel, Notting Hill, where Hendrix was staying; he was dead on arrival at St Mary Abbots Hospital, Kensington. The coroner returned an open verdict, recording the causes of death as barbiturate intoxication and inhalation of vomit; accusations of incompetence and, still more dubiously, of racism were subsequently levelled against the ambulance crew who treated him. He was buried at the Dunlap Baptist Church, Seattle, on 1 October. With 'Voodoo Chile' Hendrix scored a posthumous number one single in the UK in late 1970, and there were several subsequent album releases of unreleased, live concert, and bootleg material. His influence was lasting and profound, and can be detected in many modern rock genres, including heavy metal and rap. A large collection of Hendrix memorabilia is on show at the Experience Music Project, Seattle, an interactive display museum designed by Frank O. Gehry.