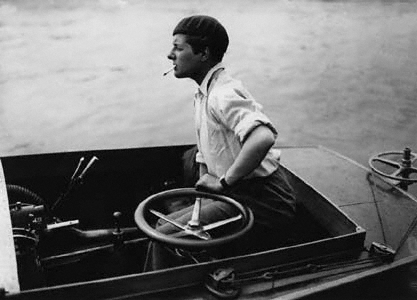 Carstairs, Joe [formerly Marion Barbara] (1900–1993), heiress and motor-boat racing driver, was born on 1 February 1900 at 115 Park Street, Mayfair, London, the daughter of Albert Joseph Carstairs, a captain in the Royal Irish Rifles, and his wife, (Frances) Evelyn (1872–1921), the daughter of Jabez and Helen Celia Bostwick, of New York. Evelyn Bostwick was heir to the fortune amassed by her father, a founder of the Standard Oil Company. She met her husband on a visit to Europe and they married on her twentieth birthday. They divorced eight years later, soon after the birth of a daughter, Marion Barbara. Albert Carstairs played no part in the girl's upbringing and there has been speculation that he was not her father. Marion Carstairs later reinvented her early life, rejecting the names given to her at birth and the gender that they implied: 'I was never a little girl,' she said, 'I came out of the womb queer' (Summerscale, 18). She took on a male persona instead, and the name Joe Carstairs.

In 1903 Carstairs's mother married Francis Francis, a captain in the British army, with whom she had a son and a second daughter. Carstairs was not close to her stepfamily and was neglected by her mother, whose 'vaulting moods were fed by alcohol and heroin' and whom she regarded with a mixture of love and loathing (Summerscale, 19). In 1911 she was sent to Low Heywood, a girls' boarding-school in Stamford, Connecticut. An unacademic tomboy, she revelled in freedom from the oppressive atmosphere of home. In 1915 her mother divorced and married a French army officer: she spent most of the remainder of her life in Paris, and divorced and remarried for a fourth time. In 1916 Carstairs, with her grandmother's support, was sent to France as an ambulance driver with the American Red Cross. It entailed her seventeenth crossing of the Atlantic: she always felt at home at sea and from an early age loved sailing.

Carstairs arrived in Paris 'a stocky, gauche American girl, steeped in new money and unschooled in art or literature' (Summerscale, 28). She shared an apartment in Montparnasse with four other ambulance drivers and was drawn to the periphery of the lesbian literary world that centred on Natalie Barney. In this Bohemian milieu she remained a straightforwardly physical and athletic character. Her first sexual encounter was with another woman in a Paris hotel room, and she later had an affair with Dolly Wilde, the niece of Oscar Wilde. When her mother heard of her daughter's lesbianism she threatened to disinherit her. To avert this Carstairs married her childhood friend, Count Jacques de Pret, in 1918. The marriage, which was never consummated, was annulled in 1921, the year of Evelyn Bostwick's death. That year Carstairs's annual income rose to nearly $145,000.

After the armistice Carstairs worked as a driver for the British army in Dublin and later northern France. Following her demobilization in April 1920 she opened, with some driver friends, an all-woman chauffeur service, the ‘X Garage’, in Kensington. It closed in 1928. Carstairs was wealthy enough never to have to work, but she gained satisfaction from utilizing her skill as a mechanic and driver. She also enjoyed subverting gender roles and developed a lean, muscular build, dressing like a man, with daringly short hair. She shared a London home, 5 Mulberry Walk, Chelsea, with her lover and secretary, Ruth Baldwin (d. 1937). They both indulged in 'the decadence of the metropolitan scene' and Carstairs had affairs with the actresses Gwen Farrer and Tallulah Bankhead (Summerscale, 91). But she also enjoyed a quiet country life at a secluded Hampshire estate, where she went horse-riding and sailing.

Though Carstairs strove for manliness the effect fell somewhat short in the eyes of some. The yachtsman Anthony Heckstall-Smith remembered her as a 'neat, trim little girl who … was like an exuberant schoolboy with her zest for speed and adventure' (Heckstall-Smith, 163). She was also, he noted, a 'first-class helmswoman', her yacht Sonia winning almost every race in its class at East Cowes in the 1920s. In 1924 she became substantially richer with the settlement of her mother's will and that of her grandmother. This enabled her to break in to the male-dominated world of motor-boat racing. Her performances in a series of specially commissioned hydroplanes were watched by Ruth Baldwin, 'cheerleading an ever-changing bevy of attractive girl supporters' (Summerscale, 71). At Christmas 1925 Baldwin gave her a stuffed leather man-doll, which Carstairs christened Lord Tod Wadley. Wadley became her alter ego and accompanied her everywhere, the centre of an elaborate and often absurd game of make-believe: a playboy adventurer, he had his own miniature wardrobe made at Savile Row.

Carstairs believed that Wadley brought her luck and her crowning achievement in motor-boat racing came in 1926, with victory in the duke of York trophy race. She won ahead of a strong international field and briefly became a national celebrity, ‘Miss Betty Carstairs’. She afterwards made three valiant attempts to win the sport's premier event, the Harmsworth British international trophy, in America. In the race at Detroit in 1928 she escaped serious injury when her hydroplane Estelle II flipped over. Undeterred, she entered again in 1929, without success. After a mechanical failure in 1930 she told reporters: 'Well, you'd better get a good look at me, because I am not coming over again. It's too frightfully expensive' (Summerscale, 115). That year she gave generous financial backing to her friend Malcolm Campbell in his attempt on the world land-speed record. She affected nonchalance on hearing of his success in February 1931: 'usually he drives like an old woman' (ibid., 118). By then she sensed the press turning against her. In a less permissive atmosphere greater attention was given to her ostentatious masculinity: her tattooed arms, cigars, swearing, spitting, and gum chewing. She left England on a world tour and afterwards lived mostly on her schooner Sonia II and mini-liner Berania. Her self-imposed exile became permanent when, in 1934, she bought an island in the Bahamas, announcing: 'I am going to live surrounded only by coloured people … I cannot say if I will ever return' (ibid., 122). She claimed that punitive taxation in Britain had driven her away.

Whale Cay, a tiny island some 30 miles north-west of Nassau, was undeveloped when Carstairs arrived. She spent $40,000 on its purchase and another $250,000 creating an infrastructure. The growing economy, centred on farming, attracted workers from surrounding islands, and by March 1941 the population was 500. She governed her dominion like a latter-day plantation owner, effectively given free rein by the authorities in Nassau. She believed that the islanders held Wadley in voodoo-inspired awe and her approach to them was a 'jumble of idealism and prejudice' (Summerscale, 178). Job segregation in Nassau appalled her, yet her workers kept to their own beach: 'We couldn't have them all over the place' (ibid., 136). She disapproved of sex outside marriage and punished adultery severely, but was less hard on wife beating. Alcohol was forbidden. Her seigneurial rights included the naming of all children born on the island. She gave to several girls the names she had rejected, Marion Barbara, confessing: 'God knows why' (ibid., 168).

At Carstairs's Spanish-style villa, the Great House, different laws prevailed. Sex, alcohol, and drugs were freely indulged in by a stream of visitors from Britain and America, on whom she sometimes played cruel practical jokes. On one occasion islanders staged a mock rebellion, which she subdued with a few gunshots while her frightened guests cowered inside. 'The blacks are going to kill us all,' she warned: 'Pansies first, women last' (Summerscale, 141). She had black girlfriends, but none were islanders: she favoured instead the company of society women whom she met on her annual holidays in New York, Miami, or the Riviera. On one such excursion, in 1938, she began a brief affair with Marlene Dietrich. She had lengthy relationships with a number of women besides Ruth Baldwin, who refused to live on Whale Cay. Carstairs was deeply affected by Baldwin's death from a suspected drug overdose in London in August 1937.

Carstairs's success on Whale Cay convinced her that she could effect the economic regeneration of the British West Indies. In the late 1930s she briefly clashed with the white establishment in Nassau, where some regarded her as a liberal defender of black rights. The reality was more complex and her outlook essentially colonial: her plans for reform came to nothing. In January 1941 the duke and duchess of Windsor made an official visit to Whale Cay and were received with great ceremony. The duke praised the roads while the duchess charmed Carstairs by asking, on spotting Wadley, 'Who is that?' Carstairs answered: 'That's my boy, that's Wadley'. 'My God,' said the duchess, 'he's just like my husband' (Summerscale, 169). During the war Carstairs's various offers to assist the war effort were declined. Disappointed by this she set up the North Caribbean Transport Company in 1943 to carry goods to Miami, remarking 'It's a sort of war work' (ibid., 203).

From the late 1950s Carstairs's health deteriorated and she spent less time on Whale Cay, where her authority declined as Bahamian nationalism rose. In 1975 she sold the island for just under a million dollars. On leaving she cried, something that she almost never did. As she predicted, Whale Cay reverted to its former state without her. She spent the remainder of her life in Florida and Long Island, surrounded by Whale Cay memorabilia. On a glass-topped table she displayed the photographs of some 120 girlfriends. She had always tried to insulate herself from emotional hurt, but allowed that there were 'one or two' that she liked 'apart from sex' (Summerscale, 218). She was led to believe that she was a good lover and her girlfriends remembered a romantic nature. But it was also said that she 'had a cheque-book where her heart ought to be', and her friends were bound by 'ropes of money as well as affection' (ibid., 220). Wadley was the only one whose friendship she never had to question.

From 1978 until her death Carstairs lived with Hugh Harrison, a friend and paid companion whom she met in Long Island. A handsome man nearly twenty years her junior, he was homosexual, something she used against him. 'I like men', she once said: 'Most of my friends are ordinary men. I've never been frightfully fond of pansies, but manly men' (Summerscale, 161). Throughout her life she was a generous provider to her friends and personal employees, and in death she divided the bulk of her $33 million fortune among them. Joe Carstairs died, probably in Florida, on 18 December 1993. She and Wadley were cremated together and their ashes, with those of Ruth Baldwin, were taken to Long Island and placed in a tomb near the sea.