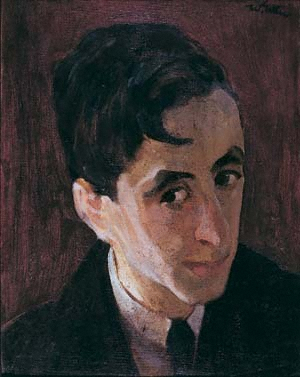 in the collection of the Royal Scottish Academy

Wood, Henry Harvey (1903–1977), writer and a founder of the Edinburgh international festival, was born on 5 September 1903 in Edinburgh, the second of the three children of Henry Wood (d. 1934), paper maker, and his wife, Anne Cassidy. He was educated at the Royal High School in Edinburgh, the Edinburgh College of Art (where he won the draughtsmanship prize for his year and also exhibited work in the Royal Scottish Academy), and finally at Edinburgh University (where he was awarded the Elliott prize and the Vans Dunlop scholarship). In 1931 he graduated with first-class honours and was immediately engaged by the university as a lecturer in English literature. Here his scholarly lectures, delivered in dry, witty rhetoric with a suspicion of a lisp, were an inspiration to his students. On 6 July 1932 Harvey Wood married Lily Terry (1907–2005); they had a son and two daughters.

At the outbreak of war in 1939 Harvey Wood was turned down for active service for health reasons but was engaged briefly in intelligence work before being appointed in 1940 to establish a branch of the British Council in Scotland. Its purpose was to establish cultural contacts with, and outlets for, the allies of various nations stationed in Scotland during the war. The tides of war had washed up on British shores vast numbers of allied servicemen, including the remains of the Polish army and air force, who had made their way to Scotland. It was in Scotland too that a Norwegian brigade was created to take part in the liberation of Norway. In addition there were thousands of refugees, many of whom spoke little English. National centres were set up to provide English classes and entertainments for refugees, enabling them to escape from often uncomfortable lodgings. To this end the British Council, in association with the allied governments in exile, founded the 'national houses' in Scotland (Scottish–Polish House, Scottish–Czechoslovak House, Scottish–French House, and the Scottish–American Centre), which were later replaced by Edinburgh International House.

Harvey Wood went even further and, enlisting the help of his friend the poet Edwin Muir, he brought a stream of poets, musicians, artists, and writers of many nationalities to Edinburgh, and the cultural programmes organized by the British Council in Scotland were considered greatly superior to those arranged elsewhere. One of its earliest undertakings was an exhibition in the National Gallery of Scotland of The Art of our Allies, in May 1941. A large section was contributed by Poles, whose commanders had released artists from military duties to complete their exhibits. The venture was described in The Scotsman (16 May 1941) as 'undoubtedly … one of the most interesting ever held in Scotland'. This was followed by exhibitions of Polish, Czech, French, Chinese, Greek, Dutch, and Norwegian art, for which British collectors lent generously, enabling displays of an unprecedented standard to be assembled. The quality of these exhibitions, and of the lunchtime concerts in the National Gallery, bore witness to the enormous enthusiasm and talent of Harvey Wood.

His experience in organizing cultural activities, and the local response to them, doubtless encouraged Harvey Wood to recommend to Rudolf Bing, who was planning a music festival in Britain, that Edinburgh had all the essential qualities for an international festival. He then lobbied influential local support and set up a meeting between Bing and the lord provost of Edinburgh, Sir John Falconer. Despite the enthusiastic support of the lord provost, the festival plan almost foundered on the rocks of apathy, civic obstruction, and local government politics, and Harvey Wood had to exercise determination, tact, and diplomacy to avert catastrophe and to steer the scheme into safe harbour. The result was the first Edinburgh international festival in 1947. Harvey Wood became the first chairman of the programme committee and a member of the executive council of the festival. It was he who persuaded the festival council to revive the 400-year-old Scottish morality play by Scotland's first known dramatist, Sir David Lyndsay of the Mount, Ane Satyre of the Thrie Estaitis, which was the highlight of the second Edinburgh festival in 1948.

In 1950 Harvey Wood had to resign from active participation in the festival when appointed as the British Council's representative in France. In 1960 he took up a similar post in Italy after serving for several years as controller (education division), in London. He retired from the British Council in 1965 and returned to Edinburgh University. Among his published works are critical editions of The Poems and Fables of Robert Henryson (1933), which included previously unknown early texts, The Plays of John Marston (3 vols., 1934–9), a new edition of Alexander Montgomerie's The Cherrie and the Slae (1937), Scottish Literature (1952), Two Scots Chaucerians (1967), and William MacTaggart (1974). He was created an OBE in 1948.

Harvey Wood died of cancer at his home, 158 Coleherne Court, London, on 12 August 1977. His body was cremated five days later at Golders Green crematorium. His wife survived him.