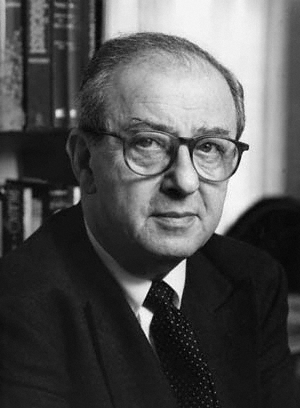 Gryn, Hugo Gabriel (1930–1996), rabbi and broadcaster, was born in Berehovo, Czechoslovakia, on 25 June 1930, in a home filled with great learning and warmth. His father, Géza Gryn (1900–1945), was a timber merchant; his mother was Bella Neufeld (1908–1964) of Silce. The Gryns were among the 10,000 Jews confined to the Berehovo ghetto in April 1944, and Hugo and his family (parents, grandparents, and ten-year-old brother, Gaby) were sent to Auschwitz on the last transport from Berehovo on 28 May 1944, arriving there on 31 May. Hugo, aged thirteen, was advised to say he was nineteen, a carpenter and joiner. He and his father were sent to work; his brother and grandfather were sent to the gas chambers. His Orthodox father found ways to celebrate the Jewish festivals, even in Auschwitz. In 1945, with the allies approaching, Gryn and his father were among the 1600 Jews sent on the death march from the Lieberose camp to Sachsenhausen near Berlin, and on to Mauthausen in upper Austria, and then to Gunskirchen. Fewer than a thousand survived the march. Hugo and his father were liberated at Gunskirchen on 4/5 May 1945 by the Americans, but Géza Gryn died a few days later from typhus and exhaustion. Hugo's mother, Bella, also survived the camps.

In February 1946 Gryn was among the last group of boys to leave Prague for Great Britain, flown out in a Lancaster bomber arranged by the Central British Fund. He arrived at Prestwick, near Glasgow, and was sent to Lasswade, near Edinburgh, to the Polton House farm school. Later that year he won a scholarship to study mathematics and biochemistry at King's College, Cambridge, and completed the two-year course in the summer of 1948. He then volunteered to serve in the Israeli army to defend that country in its war of independence, and returned to London having contracted jaundice. In London, where he worked briefly as a biochemist and then as a teacher, he came under the influence of Rabbi Leo Baeck, the leader of German Judaism and Reform rabbi, who had survived the Theresienstadt (Terezin) ghetto. Baeck became his guide and mentor, as in a different way did Lily Montagu, the leader of British Liberal Judaism, who gave him insights into a different way of religious life. Both guided him towards the rabbinate, and in 1950 he went to the Hebrew Union College in Cincinnati, a seminary for Reform rabbis, where he earned his bachelor of Hebrew letters degree, and subsequently his master's degree and doctorate as well. He was ordained there in 1957.

On 1 January 1957 Gryn married Jacqueline Selby in London. He was then sent to Bombay by the World Union for Progressive Judaism, which had sponsored his studies. He served the Jewish Religious Union there until 1960; his eldest daughter was born there. He then became executive director of the World Union for Progressive Judaism, working from its New York offices; three more children were born in New York. Gryn travelled extensively, particularly in Europe. In 1962 he accepted a position as a senior executive of the American Jewish Joint Distribution Committee (a welfare organization working with Jewish refugees), taking on difficult assignments in Prague and Budapest.

In 1964 Gryn became first the associate and then the senior rabbi of the West London Synagogue. It was the most prestigious post in British Progressive Judaism, and he held it until his death. In due course he became the central figure in British Reform Judaism; its organization, the Reform Synagogues of Great Britain, elected him its president in 1990 in recognition of his work. When the rabbis of the Union of Liberal and Progressive Judaism created an umbrella organization for all Progressive rabbis, the Council of Reform and Liberal Rabbis, Gryn served as chairman. Gryn was closely associated with the Leo Baeck College (founded in 1957); it shared the buildings of the West London Synagogue, and he served as the college's bursar, lecturer, and vice-president until his death. His teaching of practical rabbinics became essential to the more than 100 rabbis ordained during his association with the college. Education and inter-faith activities were major concerns for him, and he served as chairman of the standing committee of inter-faith dialogue in education in 1972. From 1991 he was also a governor of the World College of the Atlantic. From 1975 he was co-chairman of the London Rainbow Group, founded by the Revd Peter Schneider, which met alternately at Westminster Abbey and the West London Synagogue. Gryn was co-founder (with Bishop Jim Thompson) of the Interfaith Networth (UK) and its first joint chairman (1987–94), and he remained its guiding spirit.

The centre of Gryn's life continued to be his work as a rabbi. He was not an orator, but his quiet, sometimes stuttering style demanded attention because of its content, which displayed a deep spirituality and a love for his community. He had a congregation of close to 3000 families, most of whom felt they had a special relationship with their rabbi, and his pastoral work was phenomenal. It seemed that he had time for everyone, including itinerants and non-Jews, who brought him their problems. He was a 'rabbi's rabbi', a good colleague who gave sound advice. His common sense and practical experience were informed by a rabbinical tradition of knowledge of the text and an instinctive understanding of human problems. Some of his theological reflections were recorded in Chasing Shadows (2000), written with his daughter Naomi Gryn. In one of his many television appearances, on the BBC's Light of Experience in January 1978, he said that he had become aware of the need to act as a witness to the holocaust experience. In 1986, when the Terezin Kaddish by Ronald Senator and Albert Friedlander was first presented in Canterbury Cathedral, Gryn was the narrator, and blew the shofar in a moving performance. It was part of his continuing task as a witness; his was always the calm voice of reconciliation.

As a religious thinker, he helped to influence the development of the British Reform movement: he chaired the group which wrote their standard prayer book, Forms of Prayer (1977), and the later liturgy, Forms of Prayer 3: Prayers for the High Holydays (1985), shows his influence in remembering the holocaust within the liturgy. He had many links in the wider Jewish community, including close friendships with the two chief rabbis of his time, Lord Jakobovits and Rabbi Jonathan Sacks. This provided a bridge between the traditional and progressive communities: both chief rabbis held private and confidential meetings with the leaders of Progressive Judaism, and Gryn chaired many of the meetings. Conflicts and adverse publicity were avoided. Christian leaders also attended, and solid achievements within inter-faith dialogue were achieved, not least through Gryn's skill in handling the discussions.

Gryn's role in Anglo-Jewish life grew out of the complexities of a community aware of its minority status. The traditional Jewish community has rigid organizational structures with a centralized 'government', in which the chief rabbi has much authority. The Progressive movement gives far more power to the laity, as every congregation is independent and its board of management employs the rabbi under the terms of a fixed contract. Rabbi Harold Reinhart ruled the West London Synagogue for decades, but was in the end retired against his will. He had, however, created a place for refugee rabbis, and was succeeded by Rabbi Van der Zyl from Germany. Gryn was more than a refugee: he was a concentration camp survivor who had to deal with the grandees of Anglo-Jewry. At the West London Synagogue he was surrounded by a capable staff and his charm and pastoral skills established him with the most influential members of the community. It may be argued that the expanding role he played in national public life was a key element in overcoming the resistance he encountered within his own congregation. His relationship with the archbishop of Canterbury and his work for inter-faith harmony were even more instructive to his community than his sermons.

Hugo Gryn became one of the great friends of the British public through his regular television appearances and radio broadcasts, on Pause for Thought and Thought for the Day, the 'god slots' on Radio 2 and Radio 4, and on Radio 4's ethical discussion programme The Moral Maze. He was central to the popularity of the programmes, in which the studio team chaired by Michael Buerk quizzed witnesses about ethical issues of the day. Gryn offered sympathy and tolerance to witnesses, and summarized conclusions with great openness and honesty.

In 1989 Gryn and his daughter Naomi returned to his home town to film Chasing Shadows. It gave him a chance to deal with the past and future of the Jewish people, and showed 'his disposition to dwell on gladness as well as grief, and to express hope rather than despair' (Daily Telegraph). The film was broadcast on Channel 4 in 1991. Gryn was often interviewed on television when issues of concern to the Jewish community were discussed. He was an eloquent spokesman for the religious vision of the late twentieth century. The closing words of his posthumously published book, Chasing Shadows, summed up his view:

Time is short and the task is urgent. Evil is real. So is good. There is a choice. And we are not so much chosen as choosers. Life is holy. All life. Mine and yours. And that of those who came before us and the life of those after us.

Hugo Gryn died from cancer at 27 Circus Road, Westminster, on 18 August 1996 at the age of sixty-six. His memorial service, on 20 February 1997, was the cause of an acrimonious dispute over the attendance of the Orthodox chief rabbi, Jonathan Sacks, which was opposed by many Orthodox Jews.