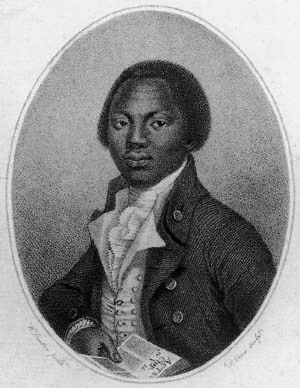 Equiano, Olaudah [Gustavus Vassa] (c. 1745–1797), author and slavery abolitionist, was in the words of his own Interesting Narrative of the Life of Olaudah Equiano born 'in a charming vale, named Essaka', most likely in present-day Nigeria. However, at his baptism in 1759 he was described as a native of Carolina, refined to South Carolina on the muster roll of the ship Racehorse on 31 May 1773.

In his Narrative, Equiano described his father as a local Igbo eminence and slave owner. Kidnapped about the age of eight, along with his sister, by slave raiders, Equiano was sold and resold on the journey to the coast, travelling for months before finally being sold onto an Atlantic slave ship. Whether his account of enslavement and of the Atlantic crossing, written more than thirty years later, was a record of his own experiences or was composed from the recollections of enslaved Africans whom he met in America, Europe, or at sea, it forms perhaps the classic account of the experience that was the fate of millions of Africans in the era of Atlantic slavery. Equiano describes how he made landfall in Barbados, but was quickly moved on to Virginia, before being sold again to an English naval officer, Michael Pascal. Renamed Gustavus Vassa (the name he used throughout most of his life), Equiano travelled to England in 1754. For seven years he served on British ships as Pascal's slave, participating in or witnessing several battles of the Seven Years' War. Fellow sailors taught him to read and write and to understand mathematics. He was also converted to Christianity, reading the Bible regularly on board ship. Baptized at St Margaret's Church, Westminster, on 9 February 1759, he struggled with his faith until finally opting for Methodism.

By the end of the conflict Equiano had attained the rank of able seaman. Despite thinking he had been freed by Pascal, Equiano found himself re-enslaved in London in 1762 and shipped to the West Indies. For four years he worked for a Montserrat-based Quaker, sailing between the islands and North America, but also trading to his own advantage as he did so. Ever alert to commercial openings, Equiano accumulated cash and in 1766 bought his own freedom. He returned to London as a free man, working as a hairdresser before returning to sea on voyages to the Mediterranean, Turkey, and, in 1772, on Constantine Phipps's expedition to the Arctic (along with the young Horatio Nelson). In 1776–7 he was employed in an abortive plantation settlement on the Mosquito Coast. His account of those adventures and other maritime experiences (shipwrecked in the Bahamas in 1767, for example) became part picaresque travel account. Tired of the sea and wary of the dangers posed to Africans in an Atlantic world dominated by slavery, Equiano again settled in London between 1777 and 1784, working as a servant. He considered returning to Africa as a missionary but was rebuffed by the Church of England. In 1784 he went back to sea, when his visits to Philadelphia proved a turning point. There he visited recently established ‘African’ schools and churches, and made contact with local Quakers. He was now known to Quakers on both sides of the Atlantic. When, in the mid-1780s, the problems of London's black poor became acute (they were mainly free black people who had retreated from North America with the defeated British in 1783), Equiano was ideally placed to act as go-between. Appointed commissary to the ill-fated Sierra Leone scheme (to encourage resettlement there), Equiano proved an unrepentant defender of black interests among settlers on the ships. He was dismissed from his post (a move which almost certainly saved his life), and the expedition sailed to a disastrous fate. Arguments in the press about Equiano's role in the Sierra Leone scheme brought his name to the public's attention.

Equiano was naturally attracted to the parallel campaign against the slave trade. On 21 March 1788 he took the remarkable step of sending a petition, or personal letter, 'on behalf of my African brethren' to Queen Charlotte (Walvin, 156). In the following year he added to a rising level of abolitionist propaganda with the publication of his autobiography, The Interesting Narrative of the Life of Olaudah Equiano. It proved a remarkable success and went through numerous editions during his lifetime. Thanks to Equiano's energetic promotional efforts the Narrative sold well, helping to provide the author with a modest estate. This was also helped by his marriage on 7 April 1792 to Susanna Cullen (1761/2–1796) of Soham, Cambridgeshire, where the couple made their home, though Equiano maintained an address in London. They had two daughters, Ann Mary (Maria) and Joanna, but by 1797 Joanna was the sole survivor of the family. She inherited her father's estate, valued at almost £1000, on her majority in 1816.

In the early 1790s Equiano moved in popular radical circles. But reaction against revolutionary excess in France and the slave uprising in Haiti undermined popular politics. Equiano continued to promote his book via friends and sympathizers, travelling extensively within Great Britain. It was a fitting example of his lifelong industry and money-making interests.

Equiano died at his home in Paddington Street, Marylebone, London on 31 March 1797; his place of burial is unknown. After his death his book was anthologized by abolitionists (especially before the American Civil War). Thereafter, however, Equiano was virtually forgotten for a century. In the 1960s his autobiography was rediscovered and reissued by Africanist scholars; various editions of his Narrative have since sold in large numbers in Britain, North America, and Africa.

Equiano's autobiography remains a classic text of an African's experiences in the era of Atlantic slavery. It is a book which operates on a number of levels: it is the diary of a soul, the story of an autodidact, and a personal attack on slavery and the slave trade. It is also the foundation-stone of the subsequent genre of black writing; a personal testimony which, however mediated by his transformation into an educated Christian, remains the classic statement of African remembrance in the years of Atlantic slavery.