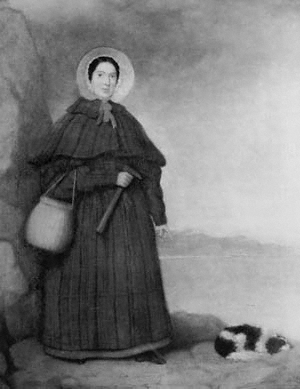 by unknown artist, before 1842

Anning, Mary (1799–1847), fossil collector and dealer, was born on 21 May 1799 in a seaside house in Lyme Regis, Dorset. She and her brother Joseph (1796–1849) were the only surviving children of Richard Anning (c.1766–1810), cabinet-maker and carpenter, and his wife, Mary Moore (c.1764–1842). Mary and Joseph were often taken out on youthful fossil-hunting expeditions by their father. He had discovered a ready, if only slightly remunerative, sale for such curiosities to the middle-class visitors starting to flock to Lyme in the summers of the first decade of the new century. He died, from the combined effects of falling over a Lyme cliff and consumption, in October 1810, and his departure left the family receiving parish poor relief. Mary, meanwhile, had become the stuff of legend, having been named after an elder sister who had been burnt to death in a house fire in 1798, and being the only survivor of a lightning strike in 1800 that killed three others. Her later history was accordingly much fabricated to live up to such legendary beginnings.

Mary developed a fine eye for fossils, and with her brother found the remainder of a remarkably complete fossil ‘crocodile’ in 1812, the skull having been found by Joseph the previous year. Such fossils were already well known at Lyme, but this one was brought to the attention of London naturalists by the lord of the manor at Lyme, who purchased it and sold it on to William Bullock. In 1814 it was named Proteosaurus by Sir Everard Home, and from 1817 was more appropriately called Ichthyosaurus. This find brought the Annings further notoriety and the two children, now with the new-found encouragement of their mother, set about finding more and more palaeontological treasures in the Lower Liassic rocks so well exposed in the cliffs and foreshore at Lyme Regis. Until about 1825 theirs was a triangular business, overseen by Mary Anning senior.

In 1820 Lieutenant-Colonel Thomas James Birch, later Bosvile (1768–1829), organized a London auction sale of the specimens he had bought from the Annings. The sale, which attracted buyers from all over Britain and from Paris and Vienna, raised up to £400, and Birch generously donated this sum to the Anning family, whom in 1819 he had found on the point of selling their furniture to pay their rent. The publicity this engendered helped secure Mary's reputation as a skilled fossil hunter.

In the 1820s Mary developed a truly remarkable public career in connection with the Lyme fossils. A series of new, ever more complete, ichthyosaurs was followed by her discovery of the first complete Plesiosaurus on 10 December 1823. This created a sensation in London but brought accusations of fraud from Baron Georges Cuvier in Paris. These accusations were soon laid completely to rest and Mary's achievement in ‘defeating’ the world's foremost anatomist enhanced her credibility. Further Plesiosaurus finds led to considerable international competition to purchase from her. This was followed by her discovery that the ink of fossilized squid-like animals had survived. This ink could be macerated and used to make drawings of the other Lyme fossils, an ink contemporary with those same fossils. This brought further publicity. Mary was also vitally involved with William Buckland's work on coprolites (the fossil faeces of reptiles). This stimulated much coarse humour and some critical evidence in the debate over whether fossil species had evolved or been created.

The winter of 1828 yielded Mary the first British example of a ‘flying dragon’, the fossil reptile Pterodactylus. This was to catch the public's imagination more than any other of her finds. Squaloraja, a new fossil fish then thought to be an intermediary between sharks and rays, followed in the winter of 1829. In mid-1830 the famous, if bloodthirsty, lithograph of Duria antiquior (a more ancient Dorset), which illustrated many of Mary's discoveries, was prepared for her financial benefit by her old friend Henry De la Beche. Her fifth major discovery followed in the winter of 1830, a new large, and large-headed, Plesiosaurus, which had conveniently curled itself up prior to death the better to fit into a gentleman's collection. This was purchased for 200 guineas by William Willoughby, Lord Cole, and demonstrates the money that was sometimes to be made from such novel, and exciting, finds.

Meanwhile Mary had become as much a curiosity as the fossils she was so adept at locating and extracting, and which she continued to bring to the attention of an astonished public, whether lay or scientist. People now regularly came to Lyme Regis to accompany her on her fossil-hunting expeditions. In 1842 her mother died, and by 1845 Mary herself was suffering from the breast cancer that was to kill her. The doses of laudanum that she took in hopes of relieving the pain led only to local rumours that she had taken to the bottle.

In 1838 Mary was awarded an annuity raised by public subscription among the members of the British Association for the Advancement of Science and augmented by a parliamentary donation procured for her by the then prime minister, Lord Melbourne. In 1846 this was supplemented by a new subscription raised among members of the Geological Society in London, and that year Mary became the first honorary member of the new Dorset County Museum in Dorchester.

Mary died on 9 March 1847 and was buried on 15 March at Lyme Regis parish church, where she was posthumously honoured in 1850 with a window unveiled in her memory. This showed the six corporate acts of mercy being given to her townspeople, in clear, if unstated, reference to her philanthropy towards the working poor of her home town. As a working-class, provincial female of dissenting origin, who was forced to work every winter—when the best discoveries were inevitably to be made—Mary's was one of the most unusual careers in the world of nineteenth-century natural history.