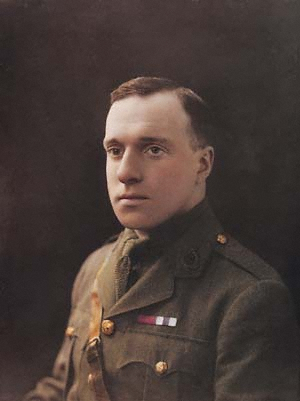 Chavasse, Noel Godfrey (1884–1917), army medical officer and holder of two Victoria crosses, was born on 9 November 1884 at 36 New Inn Hall Street, Oxford, the second (and identical twin) son of Francis James Chavasse (1846–1928), Church of England clergyman, and his wife, Edith (1851–1927), daughter of the Revd Joseph Maude, vicar of Chirk, Denbighshire, and his wife, Mary. Chavasse also had an elder sister, twin younger sisters, and two younger brothers. By example their father imbued the whole family with strong beliefs in Sunday observance, temperance, and the acceptance of a responsibility to help those less fortunate than themselves. Until his departure for the war in 1914 Chavasse involved himself with the welfare of the boys of the Grafton Street Industrial School in Liverpool. His useful talents in this context included singing, playing the piano and flute, and speaking, sermon-style, to groups of boys.

Educated from 1897 to 1900 at Magdalen College School, Oxford, Chavasse moved to Liverpool College in 1900 when his father was appointed bishop of Liverpool; here the family resided at 19 Abercromby Square. In 1905 both Chavasse and his twin brother, Christopher Maude Chavasse, went up to Trinity College, Oxford, where they distinguished themselves in lacrosse and rugby and gained their blues for athletics. Both represented Great Britain in the 400 metres event at the Olympic games of 1908, held in London, though they were not athletic in appearance, being of just average height and weight. Chavasse graduated in 1908 with first-class honours, and spent a year researching blood plasma at the Radcliffe Infirmary, Oxford. He joined the Oxford University Officers' Training Corps, an early pointer towards his growing interest in military medicine. He subsequently read medicine at Liverpool, and qualified MD in 1912.

After a short residency at the Rotunda Hospital, Dublin, Chavasse decided to specialize in orthopaedics, and spent a year at the Liverpool Royal Southern Hospital, where Robert Jones, the leading orthopaedic surgeon of the day, was consultant. This free hospital treated mainly poor people from the deprived areas of Liverpool, and served Chavasse's lifelong concern for those in need. From June 1913 Chavasse was also medical officer to the Liverpool Scottish (10th battalion, the King's [Liverpool] regiment).

In August 1914 war broke out, and by 2 November Lieutenant Chavasse and his battalion had arrived on the western front. He was the possessor of an unquestioning patriotism and an unshakeable belief that God was on the side of England, and his efforts for the welfare of his men soon became legendary. He trained his stretcher-bearers in first aid, and developed a superior stretcher and a better method for the splinting of fractures, as well as a more effective model for a trench hospital. He organized the provision of numerous extra comforts for the troops, and performed some remarkable feats of surgery in appalling conditions. Having made a serious study of the principles of military hygiene, he believed that therein lay the answer to many problems, such as trenchfoot, dysentery, and parasitic infestations. He believed that venereal disease was so prevalent in the army because no serious efforts were being made to combat it, and he wrote trenchant reports on the subject. Chavasse was never promoted beyond the rank of captain, possibly because of his criticisms, both of his superiors and of the way the war was being run. Towards German people his feelings were of sympathy and understanding, not of enmity. He also empathized with men whose nerve had gone, at times helping them to cover up their self-inflicted wounds and earning himself rebukes in the process.

Chavasse's twin brother, Christopher, served in the First World War as an army chaplain, and his younger brother Francis Bernard (1889–1941) was a battalion medical officer, also in the King's Liverpool regiment, and later became a noted eye surgeon. Both were awarded the Military Cross. The youngest brother, Aidan (b. 1892), perished on 4 July 1917 in the Ypres salient. Chavasse's sister Mary (1886–1989) served as a ward maid in the Liverpool Merchants mobile hospital at Étaples and was mentioned in dispatches.

In March 1916 Chavasse became engaged to his first cousin Gladys, daughter of Sir Thomas and Lady Frances Chavasse of Bromsgrove, but he died before the marriage could take place. Chavasse won the Military Cross for gallantry at Hooge in Belgium in June 1915, and was promoted captain in August; on 30 November that year he was mentioned in dispatches. On 9 August 1916 at Guillemont on the Somme in France he won his first Victoria Cross, for saving the lives of at least twenty men while in great danger himself under a hail of enemy fire. In the battle known as 'Third Ypres', when the opening assault on Belgium's Passchendaele Ridge was being made, Chavasse was mortally wounded by a shell, on 2 August 1917; in spite of undergoing abdominal surgery at no. 32 casualty clearing station at Brandhoek, he died on 4 August and was buried the next day at Brandhoek new military cemetery. A bar to his Victoria Cross was awarded posthumously, for his bravery in repeatedly traversing no man's land between 31 July and 2 August, in search of wounded men. His military headstone carries, uniquely, a representation of two Victoria crosses, and his medals are displayed at the Imperial War Museum in London. Chavasse is also commemorated with a memorial at Brandhoek church (1998) and a statue in Abercromby Square, Liverpool (2008).

Chavasse was the only man to be awarded a Victoria Cross and bar in the First World War, and one of only three men ever to have achieved such a distinction. Given his role as a non-combatant regimental medical officer, his achievement is the more remarkable.