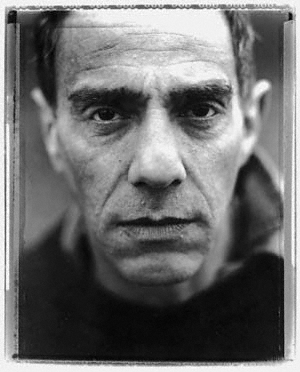 Jarman, (Michael) Derek Elworthy (1942–1994), film-maker, painter, and campaigner for homosexual rights, was born on 31 January 1942 at the Victoria Nursing Home, Pinner Hill, Middlesex, the elder child of Wing Commander Lancelot Elworthy Jarman (1907–1986), RAF officer, and his wife, Elizabeth Evelyn (Betts; 1918–1978), daughter of Harry Litten Puttock, tea merchant, and his wife, Moselle Reuben. His father's RAF postings saw a succession of temporary homes—the Villa Zuassa (Lake Maggiore), RAF Oakington, RAF Abingdon, Curry Mallet Manor, Karachi—until his father left the RAF in July 1958 and built himself a house, Merryfield, at 42 Murray Road, Northwood. Jarman attended Hordle preparatory school from 1950 to 1954 and then Canford Hall until 1960. At Canford he developed a love for the Dorset coast, which featured as settings in future films, and of painting, influenced by the art master, Robin Noscoe. A place at the Slade School of Fine Art was deferred because he had agreed with his father that he would do an 'academic' degree first. He studied English, history, and the history of art at King's College, London, from 1960 to 1963. The influence of Nikolaus Pevsner persisted in Jarman's exhaustive and exhausting knowledge of London architecture.

Jarman attended the Slade from 1963 to 1967, where his personal tutor was Maurice Feild. There he preferred the screenings of the film course, started by Sir William Coldstream in 1960, and his specialization in theatre design, run by Peter Snow, to the then prevailing mode of teaching painting. But he was occupied with painting throughout his life. He won the Peter Stuyvesant foundation prize at the Young Contemporaries (1967), showed regularly at the Lisson Gallery and the Edward Totah, the Karsten Schubert, and the Richard Salmon galleries, and had retrospectives at the Institute of Contemporary Arts, London (1984), the Manchester City Art Gallery (1992), and, posthumously, at the Barbican Art Gallery (1996). He was also nominated for the Turner prize in 1986 primarily for his achievements as a filmmaker. Even when almost blind, with the assistance of Piers Clemmet and Karl Lydon he still managed to produce paintings in Richard Salmon's studio.

But stage design first beckoned: in 1968 Jarman designed sets for Frederick Ashton's Jazz Calendar at the Royal Opera House and John Gielgud's Don Giovanni at the London Coliseum. The lack of critical success of the latter, in particular, turned his attention away from the stage. A chance encounter in 1970 led to his involvement in the designs for Ken Russell's film The Devils (1971) and Savage Messiah (1972). Introduced to Super-8 filming by Marc Balet, an architectural student in Warhol's circle, he made his first film, Electric Fairy, in 1970, assisted by Andrew Logan. In 1971 he purchased his own Nizo Super-8 camera: not only was it cheaper than conventional film, but it permitted an escape from the restraints imposed by conventional cinematographic procedures. His subsequent films showed a catholic range of influence—Fleming's The Wizard of Oz, Pasolini (P.P.P. was often referred to in Jarman's diaries), Anger, Warhol, Le Grice, and Lopushansky among others. His reading of Jung's Sermons to the Dead influenced his integration of past and present, dream and reality. His films also shared other characteristics—a love of tableaux, a static camera, filming through coloured gels, the blowing up of Super-8 to 35 mm gauge, superimposition, retardation, re-incorporation of pre-existing footage, narrative imposed in the editing room, the use of a mixture of amateur and professional actors, and an iconographic repertoire of masks, mirrors, bonfires, and derelict banks of the Thames. Lack of money enforced some of these—many of the films were made on shoestring budgets, and some as tax dodges.

Sebastiane (1975), the story of the early Christian martyr, co-directed by Paul Humfrees, featured explicit male nudity and homo-eroticism (but in the obscurity of a learned language, Latin): its showing on Channel 4 in 1982 led to a media furore, which thereafter frequently dogged Jarman. Jubilee (1977), financed by James Whaley, paralleled the worlds of queens Elizabeth I and II: its homemade qualities suited the ‘punk’ ethic and its cast included ‘Jordan’ (Pamela Rooke) and Toyah Wilcox, who also appeared in The Tempest (1979). The 1980s saw a seven-year struggle to finance and make Caravaggio. Meanwhile Jarman designed a performance in Florence of The Rake's Progress (1982), and for the Micha Bergese ballet Mouth of the Night (1984), and produced films for Genesis P. Orridge's group, Throbbing Gristle. From 1982 he made a series of pop ‘promos’ for Marianne Faithfull, Marc Almond, The Smiths, Bryan Ferry, and the Pet Shop Boys. In 1984 he made the 16 mm short, Imagining October, inspired by a visit to Russia, and he also published the autobiographical The Dancing Ledge. His film The Angelic Conversation (1985), again blown up to 35 mm, was based on a gay interpretation of Shakespeare's sonnets, and was financed by Peter Sainsbury's British Film Institute production board. 1986 finally saw the production of Caravaggio, his first 35 mm film, and his first casting of the actress Tilda Swinton. The Last of England (1987), an eschatological exploration in Super-8 of Thatcher's Britain, War Requiem (1989), Edward II (1991), and Wittgenstein (1993) followed. Glitterbug, the last film made from his Super-8 footage from 1971 to 1986, was effectively directed by James McKay.

Jarman was a passionate supporter of gay rights and was closely involved in the campaign to repeal clause 28 of the Local Government Bill (1987) and to lower the age of consent for homosexuals. He took the side of the more militant OutRage rather than of Stonewall: in 1991 he publicly denounced the actor Ian McKellen for accepting a knighthood from what Jarman saw as a repressive, homophobic government. Diagnosed HIV positive on 22 December 1986, he made this public a month later, on radio. His last years were frenetic with activity, recorded in a series of journals: Modern Nature (1991), At your Own Risk (1992), and the posthumously published Smiling in Slow Motion (2000). These journals also recorded the construction of a garden at Prospect Cottage, Dungeness, Kent, bought in 1987 with money left by his father. Together with his partner Keith Collins (the H.B. of Jarman's diaries), Howard Sooley, Peter Fillingham, and Karl Lydon, he developed a unique garden in an extreme and inhospitable environment; it provided the setting of his 1990 film The Garden. As the secondary symptoms and opportunistic infections of AIDS—tuberculosis of the liver, cytomegalovirus, and bacillary angiomatosis—began to set in, necessitating long spells in hospital, the tall, strong, saturnine Jarman with characteristic flapping arms, hovering from foot to foot, grew frail, and finally blind. His abstract film, Blue (1993), with a blank, Yves-Kleinian blue screen, a soundtrack compiled from diaries and poetry about the struggle with AIDS, and music by Simon Fisher Turner, was a testimony to the stoicism with which he faced this blow and transformed it into art. He died of bronchopneumonia at St Bartholomew's Hospital, London, on 19 February 1994 and was buried in St Clement's churchyard, New Romney, Kent, on 2 March 1994.