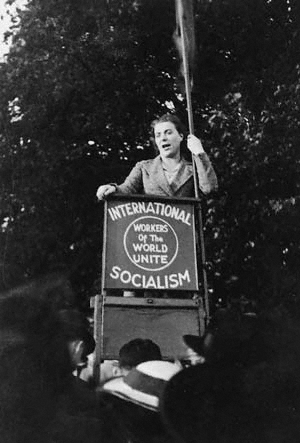 MacDonald, Ethel Camilia (1909–1960), anti-parliamentary socialist, was born on 24 February 1909 in Bellshill, Lanarkshire, one of nine children. She went to Motherwell high school, and became a member of the Independent Labour Party Guild of Youth. At sixteen she left home for good. She worked at various low-paid jobs but in Glasgow in 1933 became unemployed. After the labour exchange sent her for a non-existent waitressing job in Dumfries, she sought Guy Aldred's advice. The anarchist–communist propagandist invited her to be his secretary and assist with an advice bureau he was opening at 145 Queen Street, Glasgow. She began attending Aldred's meetings, joining the Anti-Parliamentary Communist Federation (APCF). When, shortly after, Aldred left the APCF to set up the United Socialist Movement (USM), she became its secretary. To be closer to the centre of political activity, she moved from lodgings on Cathcart Road to a top-floor flat at 24 Gibson Street, her home for the rest of her life.

In October 1936 Ethel MacDonald went to Spain at the request of the CNT–FAI (the anarchist federations) to work for their international information service, making nightly broadcasts on Radio Barcelona. She had an enormous influence on her worldwide audience, not only because of her uncompromising anarchist views (at odds with orthodox republican socialism and communism) but also, as one American editor noted, because she had 'the most wonderful radio speaking voice' (Evening Citizen, 2 Dec 1960).

With Jenny Patrick, Ethel MacDonald experienced the momentous May days in Barcelona in 1937. As the communist-led forces attacked the anarchist headquarters, Ethel MacDonald was loading rifles for the defenders. Aided by a conniving censor she sent an account of this 'Stalinist counter-revolution' back to Aldred in Glasgow. Recognizing its importance, he rushed the Barcelona Bulletin into print.

Persecution of the anarchists (and of the independent Marxist POUM) intensified. Many of Ethel MacDonald's comrades were imprisoned but she worked fearlessly on, even assisting escapes. She was imprisoned twice herself: first on the technicality of failure to renew her residence permit, then, more ominously, for 'visiting, harbouring, and associating with counter-revolutionary aliens'. Nevertheless, in prison she persisted in engineering escapes, becoming known as the Spanish Scarlet Pimpernel. In Glasgow an Ethel MacDonald defence committee was organized and campaigned vigorously; with eventual consular intervention she was released in September 1937. Her arrival at Glasgow's Queen Street Station on 7 November was greeted by a cheering crowd. At meetings in Glasgow, Edinburgh, and Aberdeen, and in newspaper articles, she revealed the developing tragedy in Spain and the plight of thousands of imprisoned comrades. Communism, she declared, was destroying 'the struggle and all the efforts of the Spanish people. Stalinism, which had betrayed so many hopes of the workers in the past, had to be arrested in Spain'. Her collection of revolutionary papers and posters (later deposited in the Mitchell Library) was exhibited in Glasgow on May day and at the USM's hall on Stirling Road in 1937.

In 1938 the International Working Men's Association (AIT) invited Ethel to Paris to assist their propaganda work. After her return to Glasgow, she helped set up the Strickland Press at 104–6 George Street in the summer of 1939. For twenty years she played her part with Guy Aldred, Jenny Patrick, and John Caldwell in printing and circulating socialist and anarchist literature, notably The Word, organ of the USM. With Jenny Patrick she stood firm against trade union denial of women's right to do typographical work.

In May 1959 Ethel MacDonald was taken ill. Multiple sclerosis spread rapidly and without remission, leaving her completely paralysed. Her strong, forthright personality, impatient of the irresolute, made her long illness all the more terrible for her to bear and for her friends to witness. She died in Knightswood Hospital, Glasgow, on 1 December 1960, bequeathing her body to medical science.

A small, dark-haired woman, at equal ease with a spanner, a sewing machine, or a paintbrush, she was a person of wide ability, sterling courage, and unswerving principle.