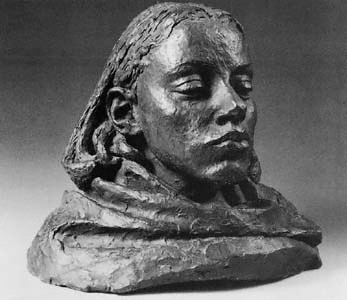 Biggar [married name Montlake], Helen Manson (1909–1953), sculptor, film-maker, theatre designer, and political activist, was born on 25 May 1909 at Dudley Drive, Hyndland, Glasgow, the eldest of three daughters of Hugh and Florence Biggar. She grew up in a socialist household, her father being a Christian socialist and founder member of the Independent Labour Party, and her uncle, John Biggar, a Labour councillor and future lord provost of Glasgow.

Helen's childhood was blighted by illness and accidents: an operation to remove a tubercular gland from her neck, and two major injuries to her spine, left her permanently short in size. From 1918 she attended a school for handicapped children and there her artistic flair was nurtured. In 1925, at the age of sixteen, she gained admission to Glasgow School of Art (GSA), and was awarded a diploma in textile design in 1929. From 1929 to 1931 she did postgraduate work in sculpture, winning a travel scholarship to London in 1930. She divided her energies in Glasgow over the next fifteen years between sculpting, film-making, and theatre design, and from 1934 a growing communist activism. Helen Biggar's artistic activities were based in a variety of studios where she produced sculptures for Glasgow patrons. On return visits to GSA, she worked with contemporaries like Emilio Coia and Benno Schotz, and in her most fruitful collaboration from 1934, Norman McLaren, a young GSA film-maker whose political and artistic temperament matched her own exactly. The two produced numerous political film treatments and scripts, ranging in subject from local health issues to world peace, but their major achievement was the short agitprop film Hell Unlimited (1936). This ground-breaking combination of live action and animation attacking the international arms trade won festival awards, toured the country's political meetings when bought by Kino Films, and is today recognized as the most innovative and powerful political film produced in Britain.

By this time Helen Biggar was involved with Glasgow Kino, touring films to raise funds for Spanish republican causes and filming subjects such as Glasgow's 1936 hunger marchers, unemployed textile workers who occupied a Hawick mill to make goods for Spain, and Glasgow's 1938 May day march (Challenge to Fascism, 1938).

In 1938 Helen Biggar joined the Glasgow Workers' Theatre Group, designing their agitprop stage shows such as On Guard for Spain (1938), Spanish Pageant (1939), We Need Russia (1939), and their Living Newspapers. Her workers' theatre collaborations with director Robert Mitchell and artist Tom MacDonald continued when Glasgow Unity Theatre was founded in 1940. Over the next five wartime years, she designed some of their major productions—Distant Point (1941), Major Operation (1941), Song of Tomorrow (1943), The Night of the Big Blitz (1944), Starched Aprons (1945), Remembered Forever (1945), Awake and Sing (1945), the Co-op centenary pageant of 1944, and the legendary Lower Depths (1945), which transferred triumphantly to London in 1945 and the first Edinburgh Festival in 1947.

Helen Biggar's wartime Glasgow art circle included refugee artists like Josef Herman and Jankel Adler, and talented locals like Robert Frame and Eli Montlake, some of whom joined her in London when she moved there permanently in 1945. They exhibited as the New Scottish Group at the Edinburgh Festival in 1947; and as the Gorbals Artists when Glasgow Unity brought their famous production of The Gorbals Story (1946) to London in 1948. On 11 October 1948 Helen Biggar married Eli Montlake at Wandsworth register office.

In London Helen Biggar (as she remained known) resumed her film activity with a contribution to the independent Ta-ra-ra-boom-de-ay (A Century of Song) in 1946; and she continued her theatre work freelance for companies like Glasgow and London Unity. In 1950 she began her most permanent employment, as wardrobe mistress and costume designer for Ballet Rambert, with which she toured the country.

Helen Biggar died of a brain haemorrhage at St Mary Abbot's Hospital, London, on 28 March 1953. Her cremation at Golders Green was attended by luminaries from the artistic, theatrical, and ballet worlds of London and Glasgow. She was survived by her husband.

Helen Biggar's pioneering merging of politics and the arts, and her courage and energy in overcoming her physical handicaps to become an independent artistic spirit, made her a model for the political art and feminist movements which emerged a generation later.