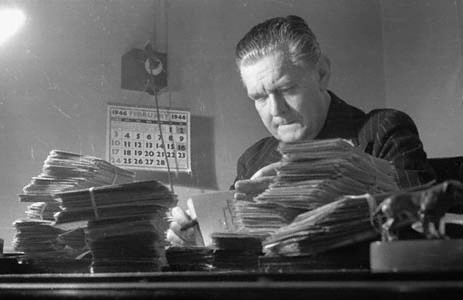 McCulloch, Derek Ivor Breashur [performing name Uncle Mac] (1897–1967), broadcaster, was born on 18 November 1897 at 6 Sussex Place, Plymouth, Devon, the youngest child of (William) Lionel Breashur McCulloch and his wife, Bertha Russell. As he lived within sight of Plymouth Sound, his childhood ambitions lay with the Royal Navy, but a change in family circumstances following the death of his father caused him to leave his local preparatory school in 1906 for Croydon high school. In early 1915 he enlisted as a private soldier in the public schools battalion of the 16th Middlesex regiment, in which his elder brothers were serving.

McCulloch landed in France on his eighteenth birthday, and was present at the battle of the Somme in July 1916 where he suffered near-fatal wounds: stranded in no man's land 20 yards from the German front line, he was fired on by an enemy stretcher party and lost his right eye. He lay in a shell hole for three days and nights, suffering numerous further injuries from shrapnel, before crawling back to his own lines. His war wounds, and the misfortune of a motor accident in 1938 which cost him his left leg, necessitated over fifty operations throughout his life, and he was never to be free of pain. None the less, after the war he travelled in Europe and South America. He was working for the Central Argentine Railway when his health deteriorated, and he returned to Europe where a bullet was extracted from his lung. In January 1926 McCulloch successfully applied to the British Broadcasting Company for the post of announcer.

McCulloch's earliest years with the BBC were not entirely happy. Continuing medical problems and some dissatisfaction with his microphone style meant that he was taken away from front-line announcing and given miscellaneous work. This included sport (he was assistant commentator on the BBC's first running commentary on an association football match in 1927) and compèring variety programmes. More significantly, McCulloch was first heard in Children's Hour as Uncle Mac. A breakdown in health while working for the Belfast station in 1929 threatened a premature end to his BBC career, but a permanent job was found for him in Children's Hour. By 1931 he was second-in-command, and on 13 June that year he married Eileen Hilda Barry (b. 1907/8), a BBC secretary, with whom he was to have two daughters. His wife was the daughter of a glove buyer, James Barry. In 1933 he was appointed Children's Hour organizer.

Children's Hour had been part of the BBC's output since 1922, and had evolved from its original dependence on spontaneous banter, fairy stories, and whimsy. McCulloch's philosophy was simple, and rigidly adhered to:

Our established policy is that nothing but the best is good enough for children … our wish is to stimulate their imagination, direct their reading, encourage their various interests, widen their outlook, and inculcate the Christian principles of love of God and their neighbour.

This policy was applied throughout what McCulloch saw as 'a microcosm of broadcasting'—drama, music, talks, variety, religion, and charitable appeals. His zeal brought his department, hitherto an unlikely adjunct to features and drama, autonomy in 1938. Aside from his administrative work, he employed his gifts of humour and personality on air, both presenting programmes and appearing in them. The playwright Dennis Potter recalled 'a kind of stiff gentleness wholly suited to a favourite uncle' (Daily Herald, 14 Feb 1964). The perennial Children's Hour favourite was S. G. Hulme Beaman's series of Toy Town playlets. McCulloch played the central role of Larry the Lamb, and his baa-ing vibrato was heard from the 1920s to the 1960s.

By 1939 Children's Hour was a national institution with a juvenile audience of some four million. With the war came the evacuation of large numbers of this audience, and for them Children's Hour acquired the added significance of a link with their home lives, emphasized by McCulloch's poignant sign-off 'Goodnight, children … everywhere'. It was a source of pride to him that, in October 1940, Princess Elizabeth made her radio début in a Children's Hour broadcast to the empire. By 1950 McCulloch was tired, and, wishing to devote more time to writing, he resigned from the BBC to become children's editor of the News Chronicle. He continued to broadcast, however, as chairman of Nature Parliament (a series he had started in 1946), and was a compère of the record programme Children's Favourites until 1965.

In 1964 the BBC—citing figures which showed that the audience for children's radio had dwindled to 24,000—discontinued the daily programme. McCulloch was predictably saddened: 'I am surprised. I would have thought a lot of children still listened to Toy Town' (Daily Herald, 17 Jan 1964). He did not long outlive the institution with which he was so closely identified. On 1 June 1967 he died at St Francis Hospital, Haywards Heath. He was cremated at Longview, Snowdenham Links Road, Bramley, Surrey.