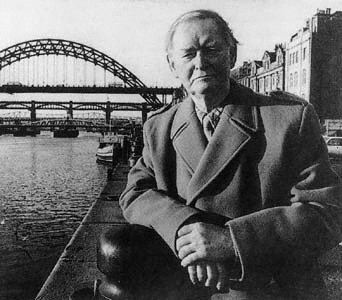 Smith, Thomas Daniel [T. Dan] (1915–1993), local government leader and criminal, was born on 11 May 1915 at 62 Holly Avenue, Wallsend, Northumberland, the son of Robert Smith, miner, and his wife, Ada, née Clifford, charlady. His father suffered unemployment in the inter-war years; both parents held left-wing views, which he inherited. Educated at Western Boys' School, Wallsend, he left to become a printer's apprentice at the age of fourteen. After suffering unemployment himself during the 1930s, in 1937 he founded a painting and decorating business, which flourished despite acquiring the local nickname of One-Coat Smith; by 1957 he owned seven companies. On 22 July 1939 he married Ada Simpson (b. 1918/19), typist, daughter of George Frederick Simpson, storekeeper; they had one son and two daughters. Smith was a conscientious objector during the Second World War and was active in militant activities (including helping to organize the Tyneside apprentices' strike), opposing the war until after the German invasion of Russia. Meanwhile he enlisted in a succession of left-wing movements, including the Independent Labour Party and the Revolutionary Communist Party, before finally joining the Labour Party.

an abrasive and often ruthless town hall politician who had an intimidating physical presence and a booming voice which didn't brook argument. He could rule a committee room with a rod of iron. He could strike the fear of God into city hall officials.

He reorganized council procedures by concentrating power in an 'inner cabinet' of Labour councillors, leaving the Conservative minority without effective influence. In a newspaper article he was quoted as saying that 'The democratic vote is no way to get the sort of changes we need in the North' (The Observer, 21 Feb 1965). During his period of control he achieved much for the city, which acquired the nickname of the Brasilia of the north. Slum clearance was accelerated and new housing built at a cost of some £50 million. A new civic centre was created and local higher education and transport facilities were improved. A variety of local organizations, including the Northern Arts Council, profited significantly from his support. He served on the Buchanan inquiry into traffic management and the Redcliffe-Maud royal commission on local government reform.

In 1962, the year in which the Architectural Review named him planner of the year, Smith founded the first of a series of public relations companies. Doubts about his integrity had been heard in 1960, when it was revealed that his decorating business had received more than half of the external repainting contracts awarded by Newcastle council. In the next year further disquiet was expressed about his involvement in the award of a lucrative contract to the building firm Crudens. From 1957 onwards he had helped the building contractor Bovis to obtain a number of major public commissions. In 1962 he became associated with John Poulson, an architect of mediocre ability already involved in local government corruption. In the next seven years Poulson paid Smith's public relations companies at least £156,000, ostensibly for organizing exhibitions and conferences for Poulson's clients in the building industry, but in reality for bribing councillors and officials in various parts of the country to steer contracts into the right hands. One of his companies was hired by the Labour Party to support Harold Wilson's 1964 general election campaign in northern constituencies, facilitating acquisition of information about leading councillors in many areas. He was increasingly careless in flouting rules governing local government finance. Initially, he often stayed away from committee meetings that awarded contracts to companies for which he was a paid 'consultant'. As early as June 1962, however, he defended in Newcastle council the award of contracts to Bovis and Poulson without declaring his own financial interest as a paid consultant to both.

It was impossible to keep such widespread malpractices concealed indefinitely. Police inquiries resulted in Smith's being charged in January 1970 with offering employment to a leading Labour alderman in Wandsworth in order to win a contract. He was acquitted in July 1971, but by this time he had either resigned from or lost all his political appointments. In October 1973 he was arrested on a series of further corruption charges arising from the Poulson affair, and pleaded guilty to six charges. Sentenced to six years' imprisonment, he served three years. There is little to suggest that Smith was an innocent enmeshed in the criminal activities of unscrupulous tempters. The evidence suggests that he sought a share in the proceeds, taking advantage of existing corrupt practices in local government. He enjoyed increased wealth, with such trappings as a luxurious hotel suite reserved for him in London and a personalized car number plate.

On release from prison, Smith sought with only modest success to rebuild a career, working for the Howard League for Penal Reform and championing the rights of released prisoners. The local Labour Party, resenting the harm he had done to the party's image, refused to readmit him to membership, and relented only in 1987. His health deteriorated and he died, aged seventy-eight, during an operation following a heart attack, at the Freeman Hospital, Newcastle, on 27 July 1993; he was cremated at West Road crematorium, Newcastle, on 2 August. He was survived by his wife and three children.