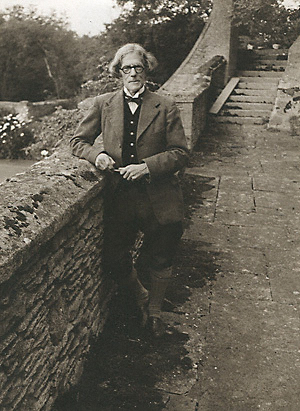 Wade, Charles Paget (1883–1956), collector and illustrator, was born at 9 Scotts Lane, Shortlands, near Bromley, Kent, on 13 February 1883, the son of Paget Augustus Wade (1849–1911), a part-owner of sugar plantations, and his wife, Amy Blanche (1858–1943), daughter of Charles Spencer, a Worcestershire curate. He had two younger sisters, Mary Constance (Connie) (1884–1942) and Olive Muriel (1885–1958). His grandfather Solomon Abraham Wade, originally a successful dry goods supplier on St Kitts in the West Indies, had acquired sugar cane plantations on the island that established the family's fortune.

In 1889 Wade was sent to live with ‘Grannie Spencer’ at 15 Wellesley Road, Great Yarmouth, to allow his attendance at Miss Haddon's Little School. Having no young companion at home and finding no stimulation and friendship in his grandmother, Wade's creativity and imagination took refuge in characters, objects, and scenes found along the quayside and in the town, as well as in 'old family relics of interest and value' (Wade, Days Far Away, 43) half-hidden in the house. Of particular significance to him was a Cantonese shrine cabinet that was only opened on Sundays. This 'Heavenly Palace of faraway Cathay' (ibid., 44) ignited his passion for collecting craftsmanship and greatly influenced the interiors he would later create at Snowshill Manor, where many of the 'old family relics' came to be housed. From 1893 Wade boarded in Eastbourne, first briefly at Timsbury School, then at St Andrews, and from January 1897 until December 1900 at Lorne House, Uppingham School. His 'chief joy' was carpentry (ibid., 64); the only other lesson he enjoyed was drawing. Later in life he was to call schools 'Graveyards of Imagination' and 'Factories of Boredom' (Wade, Notebooks, vol. 10, 1950, 120).

In 1901 Wade was indentured to the diocesan architect Edward Fernley Bisshopp in Ipswich. The town provided a rich and varied collection of buildings to study and sketch, and Wade spent many happy hours at the harbour, markets, and antique shops. He found Bisshopp an uninspiring architect, though, and was grateful when H. Munro Cautley joined the practice. Wade was drawn to the theatre, attending historical dramas at the Ipswich Lyceum and, later, in London. Photographic portraits at this time show him in period costume from his own growing collection, in poses and settings reminiscent of postcards depicting the theatre stars he saw perform, such as Sir Henry Irving, Sir John Martin-Harvey, and Sir Johnston Forbes-Robertson.

On 4 March 1907 Wade qualified as an associate of the Royal Institute of British Architects and began searching for a post elsewhere. The architect William Flockhart, unable to offer him a position, none the less later praised the 'lively and delightful architectural imagination' (letter, 12 Nov 1912) his portfolio revealed. About this time he completed an unpublished illustrated essay entitled 'The country cottage and its garden' and won a prize for garden design. In 1907 he was taken on as an assistant to Raymond Unwin of Parker and Unwin, who were working on the Hampstead Garden Suburb in London. Wade's work in the suburb included the design of the tiled arch of Twitten Passage, Asmuns Place, 3 Rotherwick Road, the Great Wall, and the Club House. Unwin recognized that Wade was as much an artist as an architect, and had him illustrate his seminal book Town Planning in Practice (1909).

In June 1911 Wade resigned from Parker and Unwin. That December his father died in St Kitts, and he inherited a substantial interest in the family sugar estates, enabling him to devote the rest of his life to his own pursuits, and more immediately to art and illustrating. It was during this period that he produced more than ninety pen-and-ink illustrations for Mary Stratton's Bruges: a Record and an Impression (1914). The following year saw the publication of his friend Kate Murray's The Spirit of the House (1915), an account of an imaginary house called Caldicott Court, for which Wade supplied pen-and-ink drawings and paintings. He exhibited at the Whitechapel Art Gallery in 1911 and at the 1935 and 1936 Cotswold Arts and Crafts Exhibition with paintings from this period. By 1917 he was serving in the Royal Engineers field company as a sapper, sketching and painting French buildings, as well as imaginary scenes, to 'escape from the most terrible surroundings in the midst of all the horrors of war' (Notebooks, vol. 29, 1954, 129). While posted as orderly room clerk near Arras, the style in which he furnished the orderly room with pictures and books and 'a pleasing cover for his bunk' was 'far too comfortable for a war', his officer felt (Days Far Away, 77).

While serving in France Wade came across an issue of Country Life advertising the sale of Snowshill Manor, an extended sixteenth-century Cotswold manor house. He was on the lookout for a suitable property to house his ever-increasing collection of craftsmanship, which had begun when he was aged seven and was now chiefly stored in his bedroom at Red House, Yoxford, Suffolk, the Wades' family home in England since 1896. Visiting Snowshill for the first time in February 1919 he found that it 'was in the most deplorable state of ruin and neglect, but had not been spoilt with modern additions' (Days Far Away, 79). He purchased the property and spent three years restoring it, with up to twenty-eight men working and living there at a time. He designed and crafted many of the internal features of the house himself. For Wade the relationship between a house and its garden was vitally important—at Snowshill the garden was an extension of the house, 'a series of outdoor rooms' (ibid., 81). He worked on its design with M. H. Baillie-Scott, who had also been involved in the Hampstead Garden Suburb. Wade wrote of a garden: '“Tis man's rest, children's fairyland, bird's orchestra, butterfly's banquet”' (Jessup, 18).

From the outset Wade regarded the manor house as a home for his collection rather than himself. He moved into Priest's House, a small cottage beside the manor, and divided his time between hunting for artefacts (often with his friends and fellow collectors Fred Hart and Sir Albert Richardson), repairing and restoring objects in his workshop, and arranging them in the manor. Although a significant proportion of his collection was exotic, most pieces were acquired in England, including seven suits of samurai armour from a tiny shop in Cheltenham. His coat of arms, of his own creation, had the motto Let nothing perish, and his collection of craftsmanship encompassed such diverse objects as spinning wheels, clocks, kitchen utensils, musical instruments, bicycles, samplers, model ships, masks, toys, pipes, mouse-traps, tapestries, manuscripts, locks and keys, rush lights, and reliquaries. The guiding principles that unified the collection were good design, colour, and workmanship—not rarity or value. He set out to create a total environment, to 'find things that would make an attractive series of rooms pictorially, not to form a museum' (Days Far Away, 100).

Wade never saw his collection as a merely private experience and much of his pleasure was in seeing visitors' responses to it as he guided them around the house and garden. He had built a very detailed model village—Fladbury—in 1907 to entertain Kate Murray's daughter, and now transformed this into a fishing village set around a pond, called Wolf's Cove, which he would dress with model ships, a working steam train, and a canal system when visitors came. John Betjeman wrote an article about Wolf's Cove in The Architectural Review in 1932, as did W. J. Bassett-Lowke in Marvellous Models in 1947. One of his most frequent guests was Albert Richardson, who often brought carloads of visitors. The evenings that followed were often spent by the fireside watching Richardson's lively one-man enactments of various Georgian scenes. Other notable visitors to Snowshill included F. L. Griggs and Graham Greene, who described Wade in vivid terms in A Sort of Life (c.1930). J. B. Priestley did likewise in An English Journey (1934). In 1935 John Buchan drove Virginia Woolf forty miles to see Snowshill, as he felt that one could not visit anywhere more unusual. She later complained that she had missed her train because Wade could not tell her the time accurately; although he had more than a hundred timepieces they were all set to different times so that they could be heard to chime and strike individually. In that year Snowshill received 1357 visitors. Queen Mary visited in 1937 and pointed out that Wade himself was the most remarkable part of the collection.

As Wade grew older he began to look to the future. In 1938 the National Trust agreed in principle to accept Snowshill and the collection at a time of Wade's choosing. Reassured as to its future, he doubled the size of the collection between 1938 and 1946. In 1944, with others in mind, he began to compile an illustrated inventory of all the objects in the manor together with more than thirty illustrated notebooks which included guides to the manor and gardens, poetry, childhood memories, and thoughts on architecture. The following year he wrote Days Far Away, a memoir.

He married Mary McEwan Gore Graham (1902–1999), nineteen years his junior, on 5 September 1946 at the Cheltenham register office after a short romance. Their marriage brought together two individuals with differing sets of values. Mary lived a relatively independent lifestyle and travelled widely, often without Wade. This relationship, coupled with his rising age, marked the slow decline of the way of life he and his close friends had once enjoyed together. Throughout his life he had visited St Kitts and the family sugar estates annually, staying at his second home, White House, for months at a time. He had a strong love for the land and way of life there and by 1951, when he handed Snowshill Manor over to the National Trust, he was living in St Kitts permanently. He returned to Snowshill each summer to stay at the manor and add to the collection. During one of these visits he was taken ill, and he died at Evesham Hospital, Evesham, Worcestershire, on 28 June 1956. Snowshill continued in the care of the National Trust; its varied collections and idiosyncratic arrangement ensured that Wade's personality, principles of selection, and invention impressed large numbers of visitors into the twenty-first century.