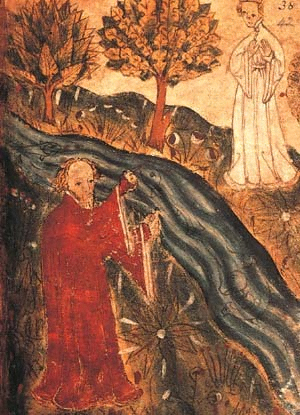 manuscript painting [as the father in Pearl]

Gawain Poet (fl. c. 1375–1400), author, is the name now given to the unknown author to whom most scholars ascribe the four alliterative poems Sir Gawain and the Green Knight, Pearl (though Gawain has some rhyming lines in each stanza, Pearl is alone in using rhyme throughout its alliterating stanzas), Patience, and Cleanness (or Purity), preserved only in BL, Cotton MS Nero A.x, Art. 3; most today reject the inclusion in his œuvre of St Erkenwald, another alliterative poem, preserved uniquely in BL, Harley MS 2250. The date of the Cotton manuscript is c.1400, and its language (reckoned not significantly different from that of the author) has been localized in south-east Cheshire, close to the Staffordshire border. Though the author's name and life are unknown, his cultural milieu must have included the Cheshire gentry in the reign of Richard II; the Stanley family of Storeton and Hooton in Cheshire and Stanley in Staffordshire has been suggested as being involved in the patronage of the Gawain Poet.

The poet was well read in English romances and probably in French ones, too; he drew extensively on the Vulgate in three of his poems, and had a general awareness of Christian exegesis and of sermons, though specific debts have not been established. The only book he cites by name is Jean de Meun's Roman de la rose in Cleanness, in which he also makes use of Mandeville's Travels (in perhaps the English as well as the French text [see Mandeville, Sir John]). Some terms used in Pearl to define a mystical state are found elsewhere in this context only in Walter Hilton's Scale of Perfection. Some have detected echoes of Dante in Pearl, but these cannot be regarded as certain. It cannot even be ascertained whether the poet was a layman or a priest. His extensive command of the technical vocabularies of courtesy (Gawain and Pearl), hunting and armour (Gawain), feasts (Gawain and Cleanness), mysticism (Pearl), and ships (Patience) is compatible with either.

Though the poems can be assigned to genres—romance (Gawain), elegiac dream-vision (Pearl), and biblical paraphrase (the book of Jonah in Patience and various biblical accounts of moral uncleanness in Cleanness)—the blurring of boundaries between them is frequent: moral and religious issues in Gawain, courtly love and its language transposed to a grieving father and his daughter in Pearl, parody of the romance hero setting forth in Patience, reminiscence of sermons in Patience and Cleanness, biblical paraphrase in Pearl, the romance taste for (meruaylez'marvels') in all four poems. In theme, there is a common preoccupation on the one hand with total moral perfection and on the other with an awareness of how man, the best as well as the worst, falls short of it; an admiration for the beauty of holiness is more than matched by a profound sensitivity to the blemishes of sinfulness: Gawain triumphantly survives a beheading game with the Green Knight but ends in despair over what to everyone else seems a mere ungentlemanly sleight; the Pearl narrator's magnificent vision of the New Jerusalem is brought to an abrupt end by his impatient wish to join his daughter in the city; the reader learns of patience not through the exemplary Job but through the impatient Jonah; the celebration of the purity of Christ's life shines briefly amid the lengthy and darksome narratives of man's filth. The distinctive flavour of the author's mind is the combination of moral gravitas with drama, psychological realism, elegance, wit, ingenuity, paradox, and, above all, surprise—as he says in Gawain, 'Þe forme to þe fynisment foldez ful selden' ('the beginning is very seldom like the end').