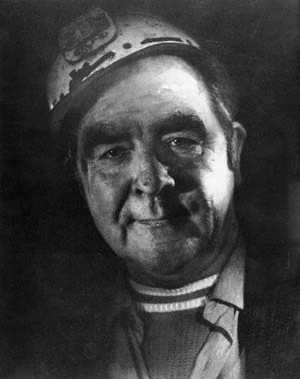 Gormley, Joseph, Baron Gormley (1917–1993), miner and trade unionist, was born on 5 July 1917 at 10 Duke Street in 'very much the rough and tough end' (Gormley, 1) of Ashton in Makerfield, Lancashire, one of seven children of John Gormley, coalminer, and his wife, Elizabeth, née Williams. His father was Irish and had originally gone to England as a farm labourer. On leaving St Oswald's Roman Catholic School, Ashton, at the age of fourteen, Gormley followed his father down the pit, after a false start working in a greengrocer's. He was a lowly haulage worker underground, and when he collected his first week's pay of 10s. 3d., his father immediately told him to 'go over to that window and get joined in the union', then the Miners' Federation of Lancashire (Gormley, 11). Gormley saw his first fatality a few years later, and his own father died underground. His mother, half-Welsh, half-Irish, who stood 'five feet and a bit' but ruled the home with a rod of iron—actually, a wooden boiler-stick—received £300 compensation for his father's death. She died a few years later. 'I'm certain it was of a broken heart,' he said later; 'I don't think she ever forgot' (Gormley, 17).

Gormley went on to work in eleven collieries in Lancashire, picking up a reputation for what was later called militancy. He first acted as a spokesman for haulage lads, who worked on piece-rate, in a dispute with the colliers, winning them a 5s. weekly share-out. By his own account he wanted to join up at the outbreak of war, but he was in a reserved occupation and not allowed to leave the pit. On 2 October 1937 he had married Sarah Ellen (Nellie) Mather (b. 1917/18), a silk spinner, and daughter of Levi Mather, a coalminer of Ashton in Makerfield. At about the same time he joined the Labour Party.

Initially, politics was Gormley's abiding interest, rather than union work. He never attended union branch meetings 'simply because I always did my own negotiating' (Gormley, 34). In 1952, soon after being elected a district councillor in his home town, he applied to emigrate to Australia, but was turned down. Four years later he was elected to the key post of delegate at Bold colliery, representing a big pit in the councils of the Lancashire miners. In the following year he was chosen the coalfield's lay member of the national executive committee of the National Union of Mineworkers (NUM). At this stage his career could have gone either way. He showed interest in entering parliament, but failed by three votes to win the Labour Party nomination for the safe seat of Burnley—blaming his defeat on hostility to the Campaign for Nuclear Disarmament. His direction was settled in 1961 when he was elected general secretary of the Lancashire miners; thereafter he sat on the NUM executive as one of the powerful coalfield 'barons'. During this period the union leadership was a battleground for left and right political machines, with communists dominating the left. Gormley's combative style and strong populist instincts made him an attractive electoral proposition for the traditional ‘moderates’, who held the upper hand. In 1963 he was gifted the NUM seat on Labour's ruling national executive committee, and he swiftly became chairman of its powerful organization committee.

In 1968 Will Paynter, a communist, retired as general secretary of the NUM, and Gormley was the natural candidate of the moderates. But this was a period of rising rank-and-file tension over Harold Wilson's plans to curb trade-union powers, and there was hostility to accelerating pit closures. Gormley's rival was Lawrence Daly, an ex-communist with brilliant powers of oratory, who promised a tough fight against job losses. Gormley lost by 10,000 votes in a poll of 220,000 members. He was 'pretty shattered' (Gormley, 73), but came back with a challenge for the NUM presidency in 1971, fighting the charismatic communist Mick McGahey. The industry was in turmoil, with unofficial walkouts over wages. Gormley ran on a promise to make miners the highest-paid industrial workers in Britain, and won comfortably with a majority of almost 25,000.

As president Gormley was now chief negotiator for the miners. In his first year, the union changed its rules, reducing the majority required in a pithead ballot for a strike from 66 per cent to 55 per cent. Months later, 59 per cent of miners voted for the first national strike since 1926, and though he privately disapproved of the conflict Gormley led the strike to a successful conclusion in seven weeks, most notably through the use of 'flying pickets' at power stations. The second strike, in February 1974, was even shorter, and delivered Gormley's promise to make miners the best-paid industrial workers. However, the power cuts, which forced a three-day week in industry and a state of emergency, together with the immense social upheaval that accompanied these disputes, also served to bring about the long-term downfall of the miners and the trade union movement at large. Gormley collaborated happily with the Labour government of 1974–9, ensuring pay restraint in the pits. He also fought successfully for the introduction of local incentive schemes, which boosted production and cut absenteeism, while accentuating the problems of loss-making collieries. With the return of a Conservative government under Margaret Thatcher, Gormley played a canny game, holding back his hardliners while using their strike threats to win concessions for the state-owned industry. He headed off a strike in 1981, when the government did not feel strong enough to win an all-out conflict with the NUM, by securing £300 million in fresh operating subsidies to avert pit closures. This was probably the high-water mark of his leadership. In his final year he tried to secure a moderate succession to the presidency, but his diplomacy failed and Arthur Scargill, the ultra-left Yorkshire leader, took over in 1982. Gormley's hopes that the responsibility of office would restrain his revolutionary zeal proved unfounded, and the NUM under Scargill became the merest shadow of the mighty union that Gormley led.

In retirement Gormley returned to his love of horse-racing. Having rejected a knighthood from Labour, he accepted a peerage under the Conservatives, in 1982, and as Baron Gormley, of Ashton in Makerfield, Lancashire, he urged the case for the coal industry. His lively and illuminating autobiography, Battered Cherub (1982), the name invented for him by the Daily Express, was a best-seller. After suffering two strokes that left him partially paralysed, he and his wife returned to live near Wigan, where he died of prostate cancer at his home, 2 Princess Park, Shevington, on 27 May 1993. He was survived by his wife, a son, and a daughter. A memorial service was held at St Mary-at-Hill, Eastcheap, London, on 25 November 1993.

In an era when leaders in the labour movement came to look like managers, Gormley stood out as a classic union boss of the old style: gruff, autocratic, and guileful. He was proud of his working-class origins and his easy kinship with his members. He was a moderate of traditional Labour stripe, but he led the NUM to success in two great national strikes, the second of which precipitated the downfall of Edward Heath's Conservative government. His real political legacy, however, was a strong, well-organized union for miners, which was destroyed by the strategic errors of his successor, Arthur Scargill. Had he still been in office, few in coalmining believed that the ruinous, year-long conflict of 1984–5, from which neither the coal industry nor the NUM recovered, would have taken place. Gormley was virtually the last of the self-taught, working-class figures who fought their way to the top of a trade-union movement that was the most influential in the Western world. Some of its decline may be traced to the loss of people like him.