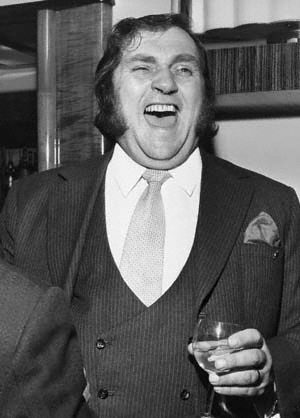 Dawson, Leslie [Les] (1931–1993), comedian, was born on 2 February 1931 in Thornton Street, Collyhurst, Manchester, the only child of Leslie Dawson (1905–1970), bricklayer, and his wife, Julia (c.1914–1957), daughter of David and Ellen Nolan. A small, chubby, solitary child, he grew up in some poverty in a Manchester slum. He first sought to make others laugh to stop himself being bullied at school, Moston Lane elementary, where what would become the distinguishing characteristic of his comedy—his sensitivity to the humour inherent in words themselves—was nurtured by a sympathetic teacher. At fourteen he began work in the drapery department of a co-operative store and he was thereafter successively an apprentice electrician, a champion jitterbug dancer, a soldier, a pianist in a Parisian bordello, an insurance representative, a local journalist, and a vacuum-cleaner salesman. His career in the last of these professions was terminated shortly after he walked on stage to compère the strip show in which he was moonlighting to see his manager in the front row of the audience.

Dawson was then performing principally as a comic pianist and he was initially discovered in the early 1950s by Max Wall, who paid for him to have singing lessons; a fellow pupil was Julie Andrews. His first foray into the comedy theatres of London met with little success, and after a spell washing dishes in a Lyons Corner House, he retreated in frustration to Manchester. The turning point of his career came in a trawlermen's club in Hull in 1956. More than usually fortified by drink, Dawson found himself unable to perform his piano routine and instead began to give vent to his weariness at life. The comic persona that emerged was a self-deprecating pessimist whose ill treatment by his wife and his mother-in-law spawned a ready line in cynical patter. Failure was his stock-in-trade, and his constant expectation.

Dawson's humour had its roots in music-hall, the exaggerations of seaside postcards, and a north country world of clogs, shawls, and matronly mill workers that in truth had vanished half a century before. The jokes he told were no more recent either, but Dawson carried them off effortlessly, in part because he gave the impression of not expecting anyone to laugh, and because his lugubrious Lancastrian delivery, laced with pathos and topped with an unexpected punchline, was genuinely funny. Misogyny was a staple of his repertory, the humour saved from unpleasantness by its absurdity. Thus, 'The wife's mother has things many men desire: muscles and a duelling scar', or, 'I'm not saying the wife's ugly, but every time she puts her make-up on, the lipstick backs into the tube.' Dawson derived particular inspiration for this strand of comedy from W. C. Fields. He breathed new life into what was essentially a traditional stand-up routine by garlanding his humour with picaresque verbal peregrinations. He had an autodidact's relish of language: 'I was vouchsafed this missive from the gin-sodden lips of a pock-marked lascar in the arms of a frump in a Huddersfield bordello.' The sight of this ornate speech emerging from a face not inaccurately described by its owner as resembling 'a bulldog sucking piss off a nettle' was both incongruous and irresistible.

Dawson steadily built a following in the theatres of the north of England during the 1960s, and he then rapidly achieved national recognition after television appearances on Opportunity Knocks and Blackpool Night Out. In 1968 he was given his own series by Yorkshire Television, Sez Les. It ran for eight years before he moved to the BBC to host The Les Dawson Show. His most notable creation in these programmes was, with Roy Barraclough, Cissie and Ada, a pair of stout Lancashire housewives. Much of their time was spent ‘mimo-ing’ to each other, the northern practice of mouthing vocabulary relating to unmentionably delicate parts of the body or the act of reproduction. Dawson also demonstrated his ability to pull his chin over his nose, the legacy of a broken jaw sustained in a fight.

Dawson's career faltered a little in the early 1980s, despite his creation of what became a well-known troupe of overweight female dancers, the Roly Polys. It was with some reluctance that in 1984 he agreed to succeed Terry Wogan as the host of a game show, Blankety Blank, but the programme's inanity proved the perfect target for his subversive humour. In an age when television was rarely held in contempt Dawson gleefully insulted the studio audience ('Good evening, culture hunters'), mocked the celebrity guests ('I've got a picture of you on my mantlepiece; it keeps the children away from the fire'), and derided the cheapness of the prizes.

Despite his success, Dawson hoped to take on straight acting roles, but in fact he was at his best when he did not have to submerge his personality beneath that required by a part. In the mid-1970s he appeared in a trilogy of plays by Alan Plater, The Loner, and in 1991 was a centenarian Argentine matriarch in the black farce Nona. He was an avid reader and he collected a library of several thousand books at his home, Garth House, Islay Road, Lytham St Anne's. He himself wrote several novels, mainly homages to his favourite authors, such as Well Fared my Lovely (1992), a pastiche of Raymond Chandler. The majority of his output was, however, over-written and self-consciously literary.

Dawson married, on 25 June 1960, Margaret Rose Plant (c.1940–1987). Despite the nature of much of his act, he was a proud husband and was overjoyed when, after enduring several miscarriages, they had a son and two daughters. He was devastated by his wife's early death in 1987, but was married again, to the much younger Tracy Roper, in 1989. They had a daughter. A heavy man with too great a fondness for cigarettes and alcohol, Dawson died on 10 June 1993 while receiving treatment for a heart complaint at St Joseph's Hospital, Manchester, and was buried on the 16th. A service of thanksgiving for his life was held in Westminster Abbey on 23 February 1994, attended by more than 2000 guests.