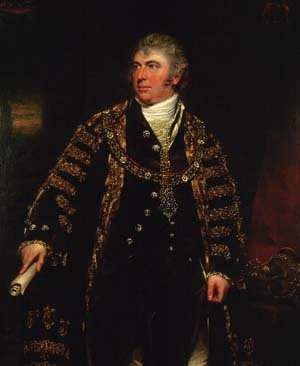 Combe, Harvey Christian (1752–1818), brewer, was born in Andover, Hampshire, the second but eldest surviving son of Harvey Combe, a prosperous Andover attorney, and his wife, Christian, née Jarman. His father was a third generation lawyer, while his mother's family, the Jarmans, were London based, with interests in the corn, sugar refining, and brewing trades. Having no liking for his early legal training in his father's office, Combe then served an apprenticeship with his uncle, Boyce Tree, a prosperous City corn and malt factor, who had married Christian Combe's sister. He became Tree's partner, and eventually his heir. On 9 May 1780 Combe married his first cousin, Tree's daughter Alice Christian (d. 1828); they had four sons and six daughters.

In 1787, enjoying an annual income variously stated at between £2000 and £3000 from his corn and malt business, Combe acquired a major share in the well-known Gyfford's Wood Yard brewery (in which a Jarman cousin had previously had an interest) which came on the market in that year. Founded in 1739 in the crowded Long Acre centre of the London coach making trade, it was a progressive brewery, the fifth or sixth largest of the capital's great porter breweries. The five partners in the new management, continuing to trade as Gyfford's brewery, raised £90,000 to carry on the business. The two largest stakeholders, Combe and his friend George Shum (1751?–1805), a founding director of the Pheonix Insurance Company and an immensely rich sugar refiner, each found £26,000. The brewery seems to have been largely run by two of the other three partners, Joseph Delafield, one of Samuel Whitbread's brewers, and William Packer, long employed at the Wood Yard brewery. In the next thirty years the brewery prospered, although less spectacularly than those of Barclay Perkin, Whitbread, Truman, and Meux-Reid. Nevertheless, a stock account of 1796 reveals Gyfford's brewery to be valued at no less than £295,587 (Janes, 73), and the banker Sir William Curtis (1752–1829), fellow MP for London with Combe after 1796, told the diarist Joseph Farington that his great friend, Combe, was worth £100,000. With considerable social and political ambitions, Combe and Shum probably milked the profits of the brewery quite hard.

After 1795, like George Shum, Combe became closely involved in City and national politics. He also had a reputation as a gambler and socialite, and as an enthusiast for pugilism. First elected alderman for the City in 1790, he was returned as one of London's MPs in 1796, the same year Shum became MP for Honiton. Combe was a moderately radical whig who, like Sir William Curtis, spoke frequently in parliament as the joint representative of City interests. He joined the Whig Club in 1785 and was admitted to Brooks's Club on Charles James Fox's nomination in 1792. Immensely public spirited, he successfully balanced public duty with his business interests. He occupied the office of lord mayor of London with great ceremony in the difficult year 1799–1800, at the height of wartime inflation and shortage. He was a governor of the Irish Society, founded for the relief of poverty in Ireland, from 1793 to 1817 and served as lieutenant-colonel in various London militia regiments between 1794 and 1809. In the City's business community he was master of the Brewers' Company (1804–5) and warden of the Fishmongers' Company (1812–14); he was a director of the Globe Insurance Company after 1805 and the West India Dock Company after 1811; he was president of the Society for Prosecuting Felons in 1817.

Joseph Farington found Combe 'to possess a very warm heart and great kindness of disposition. He is always ready to do acts of service when applied to, and engages by his manner.' Farington also noted that:

The connexion with the City has been attended with great expense to him, and he has the honour for it but not profit. In politics he is a party man, but the City have confidence in him when business is to be transacted.

No brewer, except perhaps Combe's contemporary, the second Samuel Whitbread, better demonstrates the social and political range of London's super-rich brewing fraternity in the late Georgian period. He was a close friend of Charles James Fox (after whom he named in full his youngest son), Richard Brinsley Sheridan, and the prince of Wales. His annual entertainment of royalty and his aristocratic whig friends at the brewery for traditional beefsteaks, before a more extended collation at his house in Great Russell Street, became legendary. In 1807 he acquired a country seat at Cobham Park, Surrey. He appears to have suffered a series of strokes after 1812 and resigned his aldermanic and parliamentary seats in 1817.

Combe died on 4 July 1818. His eldest son, Harvey (1784–1858), continued his father's interest in the brewery, and served as high sheriff of Surrey in 1831 as well as being a notable horse breeder and well-known master of the Old Berkeley foxhounds. The brewery later formed an important part of the brewing firm Watney Mann.