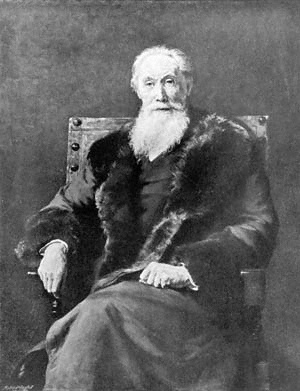 McEwan, William (1827–1913), brewer and politician, was born at Alloa, Scotland, on 16 July 1827, the third of five children (two daughters and three sons) of John McEwan, a local shipowner, and his wife, Anne Jeffrey, whose father was a farmer at Throsk on the other side of the River Forth. Alloa had a thriving harbour and industries, including malting, brewing, distilling, glass making, and textiles. McEwan's father was a partner in a small shipping enterprise from 1814, and when he died in 1832, he left shares in four vessels. The executors maintained an interest in one vessel, named the Fame, to provide an income for the family. A new Fame, a schooner of 85 tons, was built in 1835. Later, in 1852, the partnership acquired two other vessels, but the business remained modest and did not offer any employment opportunity to McEwan.

After attending Alloa Academy, McEwan went to work at the offices of the Alloa Coal Company in 1843. Seeking to improve himself, he moved two years later to Glasgow, where he joined a firm of merchants, Patersons, as a clerk, at a salary of £30 per annum. He found this post uncongenial and spent his spare time improving his education by attending lectures at the university, and visiting the theatre. After two and a half years, McEwan was offered a job in offices in Huddersfield, but on arriving there found he was not to be engaged as a cashier in the commercial department, but as a clerk in a spinning mill at Honley, which in his diary he described as a 'village without society' (Topen, 35). Nevertheless, his salary was enhanced, first to £70 and then to £100.

McEwan's eldest sister, Janet (b. 1823), married James Younger, of the Alloa brewing family, in 1850; other family connections also proved useful. In 1851 McEwan began five years' technical and management training with his uncle, John Jeffrey, who since 1835 had been proprietor of the Heriot brewery, Edinburgh. By 1856 his brewing apprenticeship was completed, and, using family and borrowed capital, he established his own business at the Fountain brewery, near the eastern terminus of the Union Canal and adjacent to the Caledonian Railway.

With the rapid expansion of the brewing industry after the late 1850s working in his favour, McEwan was remarkably successful. Within four years his turnover was reported to be in the region of £40,000 per annum. Taking advantage of cheaper and more efficient transport, he penetrated markets in Glasgow and the west of Scotland, and this proved so successful that the area soon accounted for more than half McEwan's trade. The firm also sold widely in central and northern Scotland, established a foothold on Tyneside, and during the 1860s built up a profitable trade further afield in the British colonies—hence the origin of one of its most famous products, McEwan's Export ale. These initiatives proved so successful that the business soon rivalled longer-established Scottish competitors.

In 1874, McEwan's nephew, William Younger, began an apprenticeship with his uncle, and after its completion played an increasingly important role in the firm. When, in 1886, McEwan entered parliament, Younger became manager. His effectiveness evidently matched that of his uncle, for the average annual profit between 1885 and 1889 was £92,000 and, when registered in 1889, William McEwan & Co. was reported to be worth £408,000. The company, with Younger as managing director, had a capital of £1 million, with all of the ordinary, and the bulk of the preference, shares being held by McEwan and his family.

Devoting himself increasingly to politics, McEwan, a Gladstonian Liberal, held the Edinburgh Central seat from 1886 until 1900. Although a highly regarded constituency MP, who even managed to gain support from the temperance lobby, McEwan seems to have been happy to confine himself to the back benches in the House of Commons, except when he generated controversy by demanding government action on Irish home rule. It was a measure of his popularity in Edinburgh that at the general election in 1895 he was returned unopposed. He is said to have declined a title, remarking, 'No, I would rather be first in my own order, than be at the tail end of another', indicating his personal pride as a successful self-made businessman (Donnachie, DSBB, 43). He was made a privy councillor in 1907.

Apart from his association with the firm and product which still bear his name, William McEwan was a notable philanthropist, who made gifts both to the nation and to the city of Edinburgh. He acquired a valuable art collection and presented paintings to the National Gallery of Scotland. The splendid McEwan Hall at the University of Edinburgh was built (to the design of Sir Robert Rowand Anderson) at a cost to McEwan of £115,000, plus £6500 per annum for maintenance. When the hall was opened in 1897 McEwan was made an honorary LLD and presented with the freedom of the city of Edinburgh. He was a deputy lieutenant of Edinburgh for thirty years. His last home, Polesden Lacey, Surrey, was ultimately bequeathed to the National Trust by his only child, Margaret Anderson, who later became better-known as Dame Margaret Greville (1863–1942), the noted socialite and friend of royalty. McEwan had married her mother, Helen Anderson (1835/6–1906), widow of William Anderson, day porter at McEwan's brewery, in 1885.

McEwan died in London, at 16 Charles Street, Mayfair, on 12 May 1913, aged eighty-five, and was buried at Great Bookham, Surrey. His total estate was valued at £1.5 million, an enormous sum for the time, representing his share in the firm, and investments in other industrial, railway, and mining enterprises, both in Britain and overseas. McEwan was undoubtedly one of the most successful brewers of his generation who, by good fortune, entered the industry when it was undergoing a dramatic period of expansion. One obituary described him as 'a shrewd, hard headed, hard working businessman … one of the merchant princes of Scotland' who built up his firm from 'small beginnings to huge dimensions and world wide reputation' (Donnachie, DSBB). This was a fitting tribute to McEwan's enterprise and energy.